Are you in dating limbo? Writer Suzannah Weiss shares her personal experience with existing in a state somewhere between casual dalliance and romantic relationship. 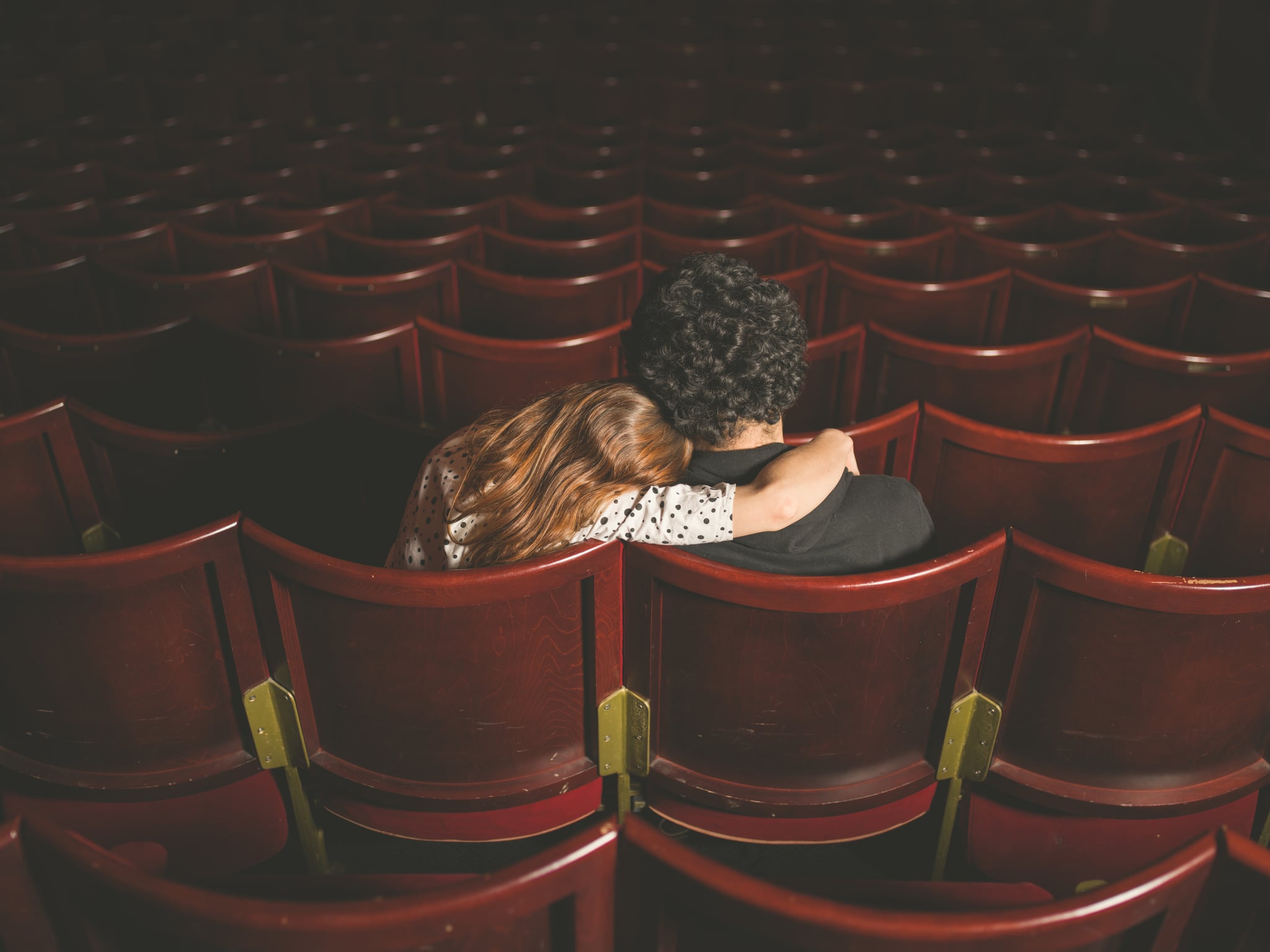 When I first read Jordana Narin's "No Labels, No Drama, Right?", a New York Times Modern Love essay about a guy named Jeremy who is much more than a hookup yet not quite a boyfriend to the author, I thought, "She's obviously crazy about him. Why doesn't she just date him?"

Then, I had to ask myself the startling question: why didn't I just date my "Jeremy"?

Like the original Jeremy, mine was in my life on and off for years without either of us ever acknowledging what exactly was on or off.

"Jeremy" and I met off OkCupid in 2012 and dated for two magical weeks full of eight-hour-long conversations, passionate kisses, afternoons making fun of bad movies like The Room, and back-to-back Words With Friends and Draw Something games — before he disappeared to get back together with an ex.

In 2013, when I was living in New York, he was in Boston, and we were both single after having had relationships during the previous year, we reconnected on Facebook and met for drinks when I visited Boston for work. He showed me a doodle he had drawn at work of a person with unidentifiable body parts in impossible positions; I showed him a Reddit thread I'd been engrossed in about children with supernatural experiences; we laughed nonstop about our awkward adolescences; and the night culminated with another bad movie — Old Boy this time — that conveniently ended after the MBTA shut down so that I "needed" to sleep over.

We became close that Winter and Spring, instant messaging nearly every day about our work grievances, quirky pets, and indie music obsessions. As I visited Boston "for work" more and more, the bus to South Station became a wormhole to an alternate universe where I had a live-in boyfriend who texted me about dinner plans from the office, binge-watched It's Always Sunny in Philadelphia with me, and offered me his sweatpants as pajamas every night despite knowing we'd both be out of our pajamas within minutes of crawling under the covers.

Over the course of these months, we occasionally reminisced on the relationship we managed to begin and end in two weeks, both admitting to regrets about how rapidly it ended. But we never discussed the possibility of restarting it. After all, we were in two different cities.

Or that's the reason we gave.

In reality, the distance between New York and Boston was nothing compared to an intangible distance neither of us could articulate.

My mind drifts into this distance as I turn my question about Jordana Narin's article back on myself. Maybe it's the same void "created when we refrain from telling it like it is, from allowing ourselves to feel how we feel," as Narin writes. "And in that unoccupied space, we're dangerously free to create our own realities."

During the several months Jeremy and I spent in this void, we existed in several parallel realities: as friends, as friends with benefits, as star-crossed lovers. And maybe I preferred the opportunity to fill the void with "star-crossed lovers" where he might have filled in "friends with benefits." By letting the realities I created about the relationship and the perhaps overly flattering realities I created about Jeremy go unverified, I got to have my cake and eat it too — because the cake was imaginary.

These unverified realities typically exist in the early "limerence" stages of dating, when we relish the excitement of wondering where a relationship is going and idealizing a person who has not yet wronged us. Undefined relationships let us prolong this excitement. But the same way stress can get us out of immediate danger in the short term but become taxing on the mind and body in the long term, the excitement of these endless questions wears off once we realize there's no answer.

In June 2014, as I got ready to spend my last weekend with "Jeremy" in New York before I would move to San Francisco — actually for work this time — and see him God knows when, I confided in a friend that all the questions were starting to haunt me.

"No. I think he loves you. But if he were in love with you, something would've come of this by now."

Jeremy arrived on a Peter Pan bus late that Friday night. We contemplated pizza toppings for a good half hour before settling on a half-spinach, half-pepperoni pie, took turns sharing dumb YouTube videos, and talked about my career aspirations and everything else pertaining to my impending move except the elephant in the room.

Sunday afternoon, after attending a long-awaited music festival, I got us both Starbucks hazelnut Frappuccinos — Jeremy's favorite — and walked him to his bus.

Then I broke down crying in the middle of the sidewalk on Third Avenue, my tears spilling onto his shirt.

"Aww." He hugged me tighter and ran his hand up and down my back. Nothing else needed to be said. Nothing else could be said. We had no language to say it.

As I walked back to my apartment with not two Frappuccinos but one in hand, my friend's earlier assertion rang through my head: did I love him? The prospect rang as neither spot on nor totally off base. Like the nature of our relationship, my feelings didn't quite have a word. But just writing this has brought my eyes back to their tearful state from Third Avenue that Sunday afternoon last June. So if I'm going to be honest, maybe I did. OK, I probably did. I probably do.

Jeremy and I tried to keep in touch during my stay on the other side of the country. But since we were both dating in our respective cities, talking about our lives got awkward. When he tried to confide in me about a love interest of his, the space where I had filled in my fantasies closed in. This mental claustrophobia brought our communications to a halt. I haven't spoken to him in four months.

Next month, I'll be moving back to New York, closing the longitudinal distance between us, but the mental distance has expanded and filled with questions like "Does he have a girlfriend now?" "Does he even want to date anyone?" "Could I settle for anything less?"

I don't think I'm ready to have these questions answered.

So instead, I'm lingering in the dark, empty space where he's a formless figure, a ghost from my past who I never expect but always rejoice to see gracing the world I live in once in a while. I'd rather bask in the excitement of a ghost sighting than ask "Are you alive?" and have him answer by disintegrating into the air.

In my most remote and improbable fantasy, the figment invites me to touch him, and to my surprise, my hand does not go through him. It holds his hand, and his hand is solid, and his hand isn't going anywhere. And it's the same hand I held at a Duke Spirit concert in the summer of 2012, when Jeremy turned to me on our first date and whispered, "Can I hold your hand?" and electricity shot between our palms.

The comforting thing about ghosts is that you can never be sure if you're holding their hands. And despite what they say about fear of the unknown, many of us would rather not know if we've been grasping at thin air all this time. Jordana Narin and I both recognize relationships with ghosts can't last, but the only thing worse than always wondering if they're real or just figments of our imagination is watching them flee back to the netherworld the moment we try to touch them.

APIA
I’m Finally Embracing My Samoan Culture. Why Can’t the Media Do the Same?
by Honestine Fraser 19 hours ago

Pet Advice
Grieving Your Pet? Here's Why You Shouldn't Feel Pressured to Rush the Process
by Elizabeth Enochs 6 days ago

Hannibal
Why I, a Horror Fanatic, Just Couldn't Get Behind Hannibal
by Grayson Gilcrease 6 days ago