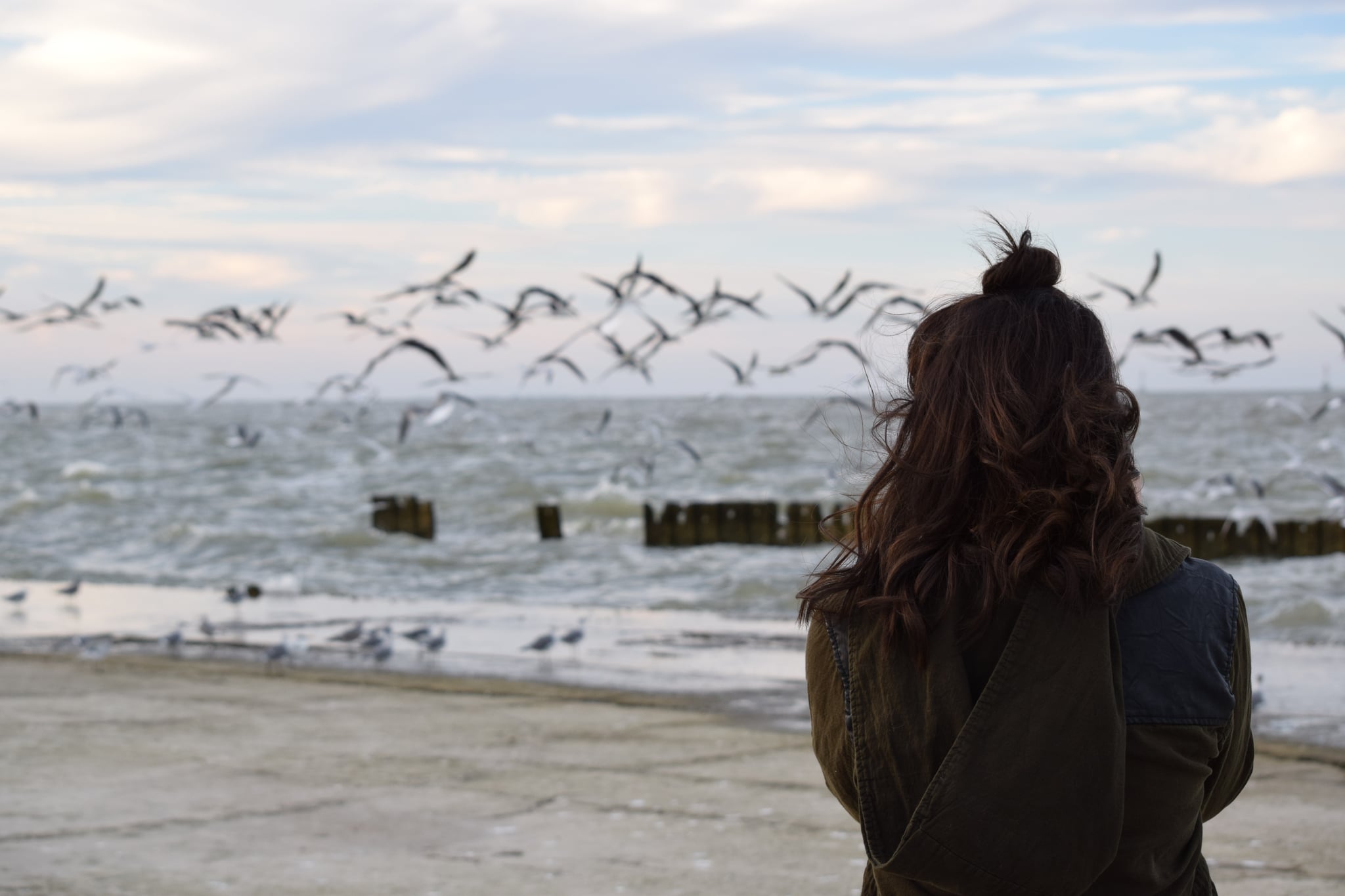 The first time I'd ever been hit by my ex-boyfriend was my freshman year of college outside my dorm building. He slapped me across the face so hard it felt like dry ice was stuck to my cheek. What had just happened didn't quite register as quickly as his hand moved, and all I could do was stand there stunned with tears down my face and my lunch now spilled on the ground. He continued to scream at me because we had just gotten caught by the front desk for breaking the overnight guest policy (we exceeded the 48-hour rule by a few days) and because I tried to talk it out with the RA instead of storming out with him. What was even worse is that he denied hitting me, eventually apologizing for what I thought he had done. Just when I began thinking that maybe I was going crazy, a floor mate came to check on me later that day. My boyfriend at the time was yelling at me so loudly, he was able to hear (and see) us from the 11th floor behind closed windows. I continued to stay in this relationship for four years, and this incident was only just the beginning.

This is the part where you're probably thinking, why the f*ck didn't you leave that psycho? — I also had never understood why women would ever allow themselves to stay in such horrible situations. And it wasn't until I experienced it firsthand that I realized, unfortunately, it's never that easy. It has nothing to do with who the person is, whether they're weak or strong-willed, educated or uneducated. The psychological effects of abuse are so powerful, it can turn anyone, male or female, into someone completely and utterly powerless. According to the National Coalition Against Domestic Violence, one in three women have been physically abused by an intimate partner. The dynamics of a toxic relationship are far more complex than any other because it involves someone you deeply care about and oftentimes love. I would never tolerate that kind of treatment from a stranger, but when it comes to a significant other, it becomes much more confusing and messy and not so black and white.

Also according to the NCADV, domestic violence is most common among women between 18 and 24, the same window I fell in. And it makes sense. It's just around the time when people begin getting into their first serious relationships. My ex and I started dating toward the end of our senior year in high school, and then we both went off to separate colleges on opposite ends of California. I think distance is what made things even more complicated. He was extremely jealous, insecure, and paranoid when it came to fidelity, which wasn't apparent when we first met. I fell for his confidence, thoughtfulness, and intelligence, and those qualities weren't easily forgotten when I learned about his anger.


I mistook fury for passion and I focused on the fact that when things were good, they were really good.

In his moments of sweetness, I convinced myself that he did care for me and that it was my responsibility as his partner to make him feel secure about our relationship, even if that meant I had to stop talking to my friends and family, send him photos of where I was at all times, and reject all invitations outside of my dorm room. He was manipulative and all-controlling; I wanted to prove that I was a faithful and devoted girlfriend, and I was willing to do whatever it took to avoid fighting. It wasn't unusual to be woken up by a call from him at 3 in the morning, hearing "f*cking slut" and "dumb b*tch" screamed from the other line. He called because he couldn't stand the thought of me being with other guys before him. He always assumed I was cheating on him, which made him feel like I needed to be constantly punished. And eventually, I was somehow convinced of the same.

Verbal, emotional, and psychological abuse were common in the first two years of our relationship, and the physical side increasingly worsened with time. I remember one particular fight so vividly, when he repeatedly punched my arm over and over so hard as I was driving that I couldn't move it. I was pleading for him to stop and when he didn't, I intentionally ran a red light so that the cop I passed would stop us. He was able to convince the police that his hysterically crying girlfriend was unstable and crazy and needed to be taken away from him. They let us go with a warning and I was shaking with fear when they left, afraid of how I was about to be punished. He shattered my car windows with his skateboard, but of course, he would wait until we got home to really give it to me. He slammed me against the wall and strangled me, and I recall thinking that he was going to kill me. We made up, of course. He saw how purple and brown my arm was and apologized, and that was that.

I transferred schools and moved in with him by our third year together. I can't tell you how many times the cops came to our door because of calls from our neighbors and how many times I had to lie and say that it was just an argument. As much as I wanted to turn him in myself, this was still my boyfriend. We were both great students with bright futures, and I couldn't help but be sympathetic to that. I was in a new city where I knew no one else — where would I go? How could I tell my parents about what I was going through? Who would take my calls after years of being shunned? In his moments of clarity, he also knew how dangerous he could be. So, he started seeing a therapist on campus and we began to treat his "demons," as he'd call it, as a mental illness, which complicated things further. I couldn't just leave someone I loved who also desperately needed help. It ran in his family; he was a replica of his short-tempered father, and it saddened me that he was unable to be somebody different.

But a person can only take so much, and everyone has a breaking point. I started to fight back and hit back, and I'm not proud of it. I had so much anger built up inside of me that when he provoked me, I didn't hold back and I didn't want to. Our fights would end with us both exhausted, breathing heavily on the ground. My psyche was damaged beyond repair and I felt as though I was going insane, going through the same fights and accusations day in and day out. You'd think that being tackled into the bedpost and coming out with a golf-ball-size lump on the back of your head instead of a broken neck would be enough to snap you out of it. But it didn't. Eventually, I became so numb to it all and accepted that I was stuck. This was my life now. Working 30 to 40 hours a week and balancing internships as a full-time student, I didn't have enough energy to come home and continue the battle. He stopped having an affect on me, and he didn't like that. A lifeless face would just stare back at his yelling when it would normally be able to get a reaction. By our fourth year, I was too physically, mentally, and emotionally exhausted to even figure a way out. He refused to accept the fact that I wanted to leave, that I hated him more than I had ever loved him. He would plead and plead to make me stay, and I would because I didn't know any other option.

Eventually, we both moved to San Francisco after graduation and we got into another massive blowout at our new apartment. But this time, he called my parents and left the worst possible voicemail you could imagine. When he left for work the next morning, and as I was getting ready, my mother called and said, "I'm getting on the next plane; pack a bag and leave now." I didn't argue back or try to convince her that everything was OK like I normally would have — I said, "OK," and followed her instructions. I never went back. I fought hard over the next few months to get a restraining order because the calls and threats were nonstop. Little did I know that it was my responsibility to prove to the courts that I needed protection. Eventually, I won and was granted a five-year order against him. Some days, I question whether this piece of paper is enough to keep him away. And I also wonder what happens next when the order is up.


The fact that it's so difficult as a woman to be believed as a victim is disheartening.

And I understand why so many women choose to keep their mouths shut aside from embarrassment, financial reasons, dependency created by the effects of the abuse, and other factors. I know that I'm incredibly lucky to have a family who could help me out and put me in my own safe apartment, and it breaks me that not everyone is as fortunate.

For those who feel guilty about not being able to protect their loved ones from abusive partners, know that there's only so much you can do. I heard it all from friends and family, urging me to end it, but I ignored them all and shut them out. A person who loves their partner so much that they're willing to endure abuse will not simply leave because you asked them to. The decision is theirs. When my mother called me that day and told me to go, it was still ultimately up to me to listen. But even if someone continues to be stubborn year after year, hit after hit, always remind him or her that you're there. Because you never know when they'll finally accept an extended hand.

Today, I've never been happier. And looking back in retrospect, it's hard not to be sickened by my choice to stay, especially for as long as I did. But instead of torturing myself about those painful years, I focus on how it's made me into such a strong woman. It was an awful learning experience, but a learning experience nonetheless. I know now more than ever before how a person who really loves you is supposed to love you, that the best kinds of relationships are the ones that make love feel easy, that it's not solely your responsibility to make your partner happy, and that nobody should ever be mistreated for any reason. I had to work on myself for a while to come to those realizations, and though things won't return to normal overnight, I can tell you that it does get better, no matter how defeated you feel. My relationships with my friends and family have never been better, I've been in the healthiest long-term relationship with a man I'm grateful for every day, and, most importantly, I love who I am.