In Wicked Sexy Liar, London Hughes is very content to surf daily, tend bar, hang out with her group of friends, and slowly orient herself in the years after college. Everything's going great and according to the nonplan.

But when a wave knocks her for a loop one morning, then Luke Sutter's flirtatious smile knocks her for another that evening, she veers slightly off course . . . and into his path. Sure, he's a total player, but the Why not — it's only one night is a persistent voice in her ear.

Every relationship involves two people . . . plus their pasts. And as much as she enjoys her fling with Luke, when London learns about his past — more specifically, who's in it —everything becomes the brand of complicated she strives to avoid. 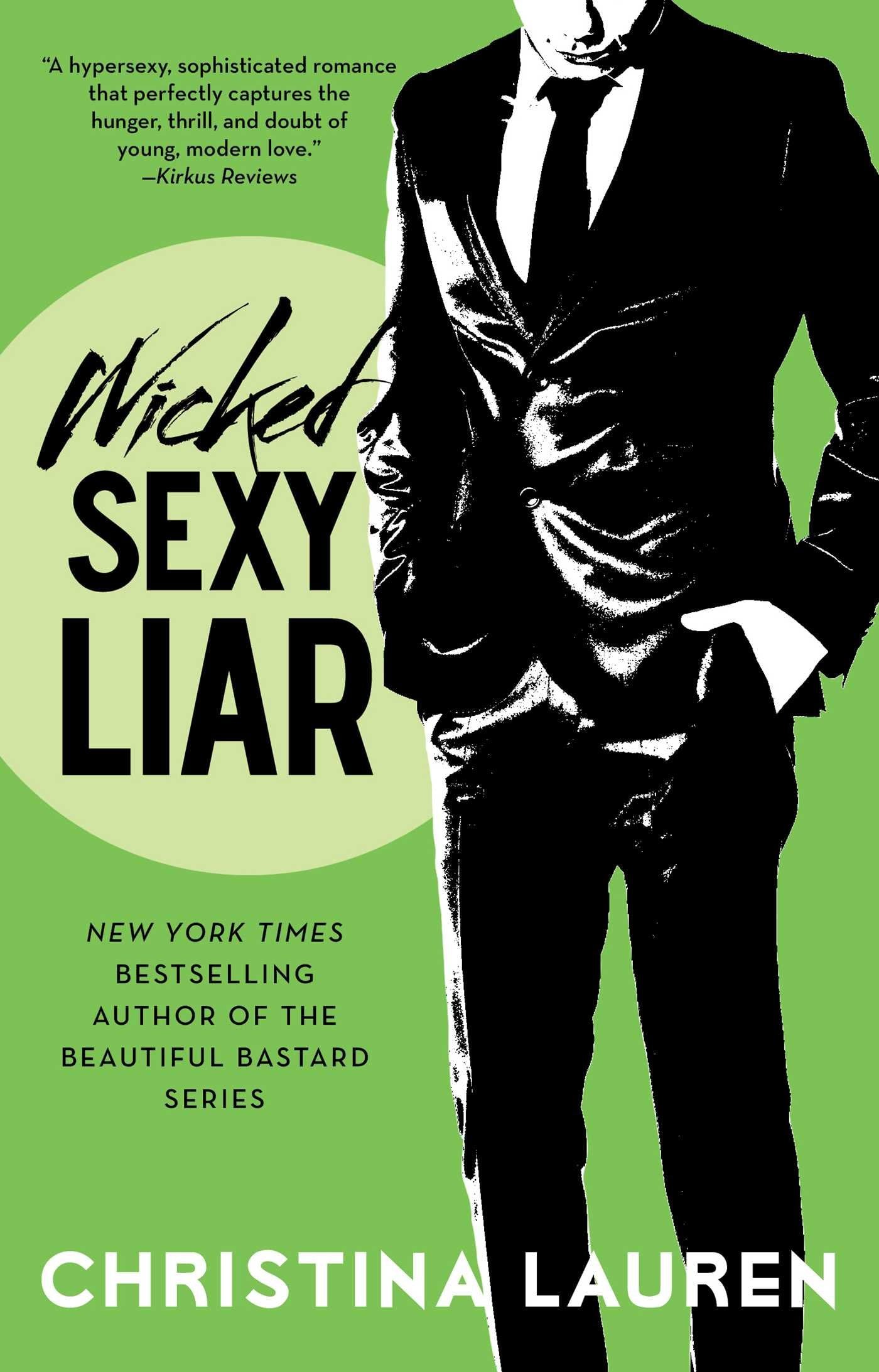 I step into the restaurant, dodging other customers in my peripheral vision as I scroll through my texts. Just as I get in line to order, I hear a tiny snort and look up, catching the whip of blond hair as the snorter-in-question turns toward the counter.

So I'm left facing the back of a blond head that looks awfully familiar.

I pocket my phone. "Hello, Amsterdam."

I didn't expect to see London here, in line at my favorite Mexican joint only a few miles from work. But here she is, and my heart does something unfamiliar: it sort of jumps and then hammers, as if I'm particularly excited to see her.

She looks over her shoulder at me, and then tilts her head down as she does the lengthy inspection of my entire body. "Nice suit."

"Same," I tell her. Holy sh*t, I mean I've seen her naked, but catching her in a bikini top, little cutoff shorts, and flipflops at sunset makes me feel moderately dizzy. "But who forgot to tell you it's cold outside?"

Tilting her head, she asks, "It's someone's job to tell me when it's cold?"

I open my mouth and close it, realizing I have nothing witty to say. She turns back to the counter with a little smile, leaning forward to order. I can see the curve of her ass peeking out beneath her shorts. Honestly, I could wait in line all damn day with a view like this.

While she waits for her change, she turns a little to look back at me. "I don't think I know what you do during the day, because I would not have predicted the suit."

"What would you have predicted?"

She fights a smile, and studies me. "You're a lawyer?"

"Easy, high roller. I'm twenty-three and a half; still only a clerk. I'm applying to law school."

I watch her fight a groan. "Of course you are."

"I mean, it's not surfing all day and pouring drinks all night, but it's a start."

F*ck. That was sort of d*ckish.

I can tell how hard it is for Sunshine London to be outright dismissive of this, but she manages a tiny little f*ck you smile as she turns away, grabbing a few cups of salsa and making her way over to the exit. She pushes the door open with her ass, and places the salsa on a table just outside. The words Worthy Opponent flash in my head before she turns and comes back inside to wait for her food.

When she looks up at me, her full mouth curls in a smile. I study her blond hair, freckles, and the whole length of her: forever-long legs in her tiny shorts, breasts somehow contained by the triangles of her bikini top. My attention returns to her face and I catch a glimpse of her open, unguarded expression—some vulnerability or curiosity about what I'm thinking—before she slips her defense back into place.

Her number is called and she picks up an enormous plate piled with some unidentifiable food. Holding it up to her nose, she inhales deeply. "I come here for the carne asada fries." With another little smile, she says, "See you later!" and heads back out to her table.

This girl, I swear.

I hadn't planned on taking my food to go, and with only four tiny tables it's a little awkward to sit in the same small restaurant but not together. My number is called, and after a pause, I grab my plate and follow her outside.

"Incidentally," I tell her, "I come here for the soyriza nachos."

London looks up as I set my food down in front of her. "What are you doing?"

I get it. This is a little weird, and as much as I might like her, I respect that the other night was a one-time thing. But I'm not going to eat soggy nachos in my car out of a Styrofoam container to avoid this.

She laughs, waving her hands palms down over the table. "No. No. Nope. We don't have dinner together."

I slow my movements, but continue to sit anyway. "Is that the same thing as 'can't have dinner together'? Because I might have missed that in the rulebook."

Her blue eyes narrow playfully as she watches me unroll my fork and knife from the paper napkin. "Please don't make me regret sleeping with you."

"Technically, we didn't sleep. Remember that time we had sex on my couch, though?" I ask, pulling a large tortilla chip free of the pile. "That was pretty awesome."

"Yes," she agrees, pointing an accusing finger at me. "We did have sex on your couch, but—"

"And the floor," she concedes with an eye roll. "But would—"

"And then back on the couch again."

She sighs, eyebrows raised as if she's making sure I'm done interrupting. I give her a tiny nod.

"Wouldn't it just be a lot easier if we avoided each other from here on out?" she asks.

I nod as I swallow, unfamiliar with being on the receiving end of this particular conversation. "Probably."

I can see in my peripheral vision that she's watching my face while I coax the water through her hair, rinsing away the suds, but instead of meeting her eyes, I focus on my hands.

"Why did you come over here again?" I ask her quietly.

She reaches for the soap and I shiver when her hands press to my stomach and slide up over my chest. "I'm not sure." She meets my eyes and gives me a sweet, tiny grin. "Sorry I was rude."

"You were taking your self-loathing out on me, I think. But then, you didn't have to come over here."

Her grin turns into a wide, dimpled smile. "You're not going to goad me into becoming one of the girls in your phone who insist they never do this kind of thing."

"I'm not trying to goad you. It's just that in your case, it seems to be true. Even if you hadn't told me our first night together, I would bet you never do this kind of thing. Not that there would be anything wrong if you did."

She nods, and watches her hands as she lathers up my chest, my shoulders. I can barely hear her answer over the pounding water: "The sex was good. And I figured you were the kind of guy who can keep it just about sex, which is all I want right now."

I mean, it's never been a problem before, but I'm troubled by how much I want her to like me. "I'm going to be honest, though. You sort of suck at it." Her mouth drops open when I say this, and I quickly add, "Not the sex part—you're very good at that part, if memory serves—but the part where it's just about having fun sex together."

Her blue eyes flash up to mine. "What do you mean? I'm not getting emotional on you."

I laugh at her quick defense, tickling her sides. "I mean, you're sort of a jerk to me."

She giggles. "I'm sorry! I swear I'm not a jerk. I just… I don't want to date, and the kind of guy I would date anyway is nothing like you, but here I am… for sex. So yeah, maybe some self-loathing… which makes me into a jerk."

I'm trying to ignore the insult in there. "What kind of guy do you date?"

She looks up at me quizzically. "I don't."

I sigh in exasperation, squeezing conditioner into my palm while she washes my arms. I slide my fingers into her hair, saying, "I mean, you're saying I'm not your type. What is your type?"

"Mustard yellow cord-wearing craft brewer?" I ask, and she laughs. "The kind of man who is heavily invested in his mustache wax, so he can get the upturned points just right?"

"Something like that." Her hands move back to my chest, down my stomach again. With her eyes on my face, she reaches lower, sliding a soapy hand down my c*ck.

Her cheeks flush and I shiver, eyes rolling closed as I jump in her palm. I want to tell her it feels good, I want to kiss her, but I'm immediately so consumed by the feel of her touching me that I'm stuck in place, water running down my face.

She lets out a little moan when her hand slides over the head of my c*ck.

Her mouth presses to my collarbone. "Nope, not even a little."

Get Wicked Sexy Liar, and check out more great content on XOXO After Dark: