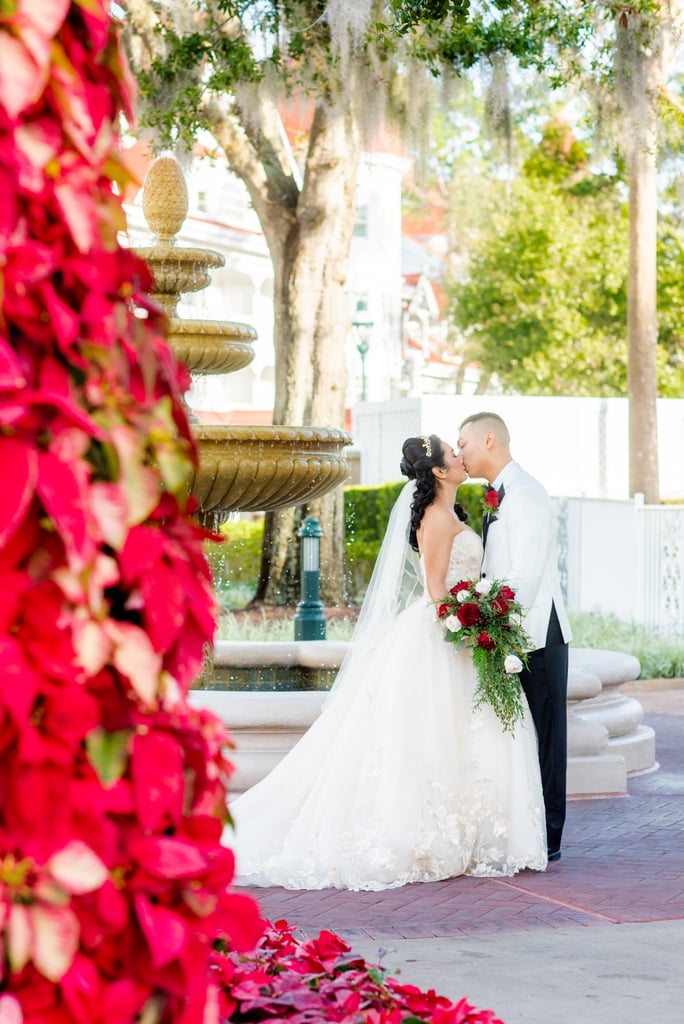 This Couple Had a Christmas Eve Wedding at Disney World, and the Cute Factor Is Off the Charts

Nonica and Jeremy not only tied the knot at Walt Disney World, aka "The Most Magical Place on Earth," but they also did it on Christmas Eve. So if you're feeling Grinch-y, better step away now, because this wedding is chock-full of Disney holiday magic, and we can't be held responsible if your heart grows three sizes.

First of all, their love story is the stuff of romantic comedies. They first "officially" met in sixth grade when their dads were stationed in the same naval air base in Japan but didn't actually get to know each other until three years later when they were put into the same class. It was not love at first sight.

"He and I hated each other," Nonica wrote in an email. "We were rivals in nearly everything! From test scores, running the mile to playing Jeopardy! But we secretly liked each other and just wouldn't admit it. Apparently all our classmates knew this but neglected to tell us until many years later. Eventually, like all military families, my dad received orders to move to San Diego, CA, so we parted without telling each other how we felt."

Luckily, all was not lost. The pair reconnected years later thanks to MySpace, and in a romantic gesture worthy of a Nicholas Sparks novel, Jeremy asked Nonica to be his girlfriend via a MySpace message. "I still make fun of him to this day," Nonica confirmed.

Flash forward to Dec. 24, 2017, and Jeremy proposed to Nonica at Disneyland Paris. It only seemed right that exactly a year later, on Christmas Eve 2018, this Disney-loving couple would throw the wedding of their dreams at Walt Disney World in Orlando, FL. "Every couple envisions their wedding day to be magical," photographer Mikkel Paige wrote to POPSUGAR in an email. "But Nonica and Jeremy's Disney touches for their Walt Disney World wedding was truly one where the pixie dust wonderfully overwhelmed the senses."

See the magic for yourself ahead!

Related:
Castles, Crowns, and Carriages: Here's What You Didn't Know About Having Your Wedding at Disney
Previous Next Start Slideshow
Walt Disney WorldDisneyHolidayChristmasWeddingReal WeddingsWedding Themes