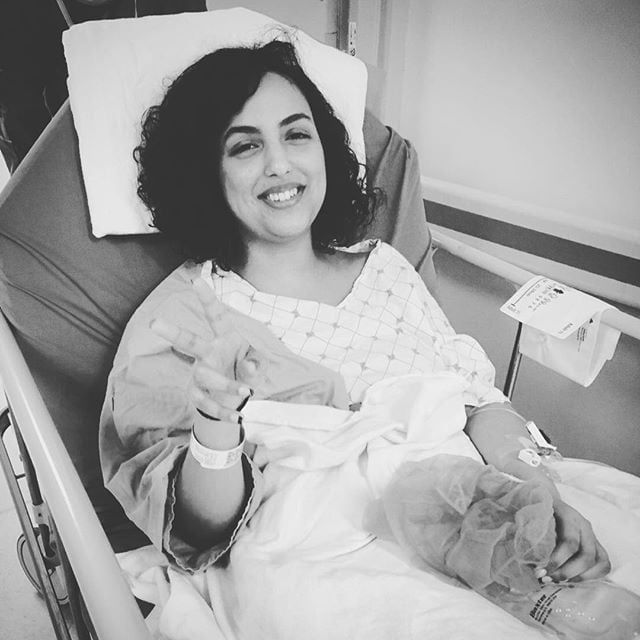 "Is Yosef . . . homosexual?" My dad could barely choke out the word "homosexual" in a low, embarrassed whisper when he asked me. For years, my older brother had been fighting an emotional proxy war with our dad. This time, instead of addressing childhood abuse inflicted on him that was not yet processed, he asserted gayness to rebel against and anger our conservative Muslim father. While I can't speak to the depth of authenticity in my brother's presentation of sexuality, the experience of witnessing my entire family reject and condemn him for it ignited deep fear in me.

I prayed with great conviction to whatever god was listening: "Please, please don't make me gay or give me cancer. I'm just not strong enough."

Knowing that queerness could be used as fodder to create conflict in the already very dysfunctional unit that is my family — I shrank. I prayed with great conviction to whatever god was listening: "Please, please don't make me gay or give me cancer. I'm just not strong enough."

Seven years later, I was diagnosed with thyroid cancer at 26. The summer before my second year of graduate school I was doing fieldwork in Lebanon when one morning, I noticed a marble-sized protrusion sticking out from the left side of my neck. It worried me, because as my high-school anatomy teacher would often preach: "Asymmetry is dangerous." But I was running late to a meeting and assumed I was too young for it to be anything serious. By the end of the summer, I was sleeping close to 18 hours a day. I could barely get myself out of bed. I wrote it off as depression and pushed myself even harder to regain control over my body as I felt it gradually slip from my grasp. A few months later, I got my ever-growing marble biopsied, and was diagnosed in my last semester of graduate school.

I was terrified. I understood cancer to be an imminent death sentence in every case except the movies: like in 50/50 when Joseph Gordon-Levitt's character is diagnosed with schwannoma neurofibrosarcoma, an extremely rare type of cancer found in the spine that's known to have a 50 percent survival rate. Him living to see remission despite the odds did nothing to create hope in me. Of course he lived: he's fictional and white. I'm real and as brown as Yogi Bear, which also translated to limited access to quality care and often getting hit with insurance premiums that forced me to work throughout the entirety of my treatment.

Why did I have to deal with the magnitude of my humanity so early in life? Why did I have yet another thing standing in the way of my happiness?

My daily schedule often looked like: wake up at 4:45 a.m., pray, get ready to go to the hospital for blood tests, head to work my 9-to-5 job, and then class until 9 p.m. to ensure I would finish my master's degree as scheduled. I felt trapped at work and school due to the abysmal financial realities of what taking leave from either would mean for whatever future waited for me on the other side of this experience. It goes without saying that I was in denial and avoiding the cocktail of pain, confusion, and resentment brewing in me that was too overwhelming to acknowledge. Why did I have to deal with the magnitude of my humanity so early in life? Why did I have yet another thing standing in the way of my happiness? With each passing day, I cared less and less about myself and the tasks immediately in front of me. I was spiraling and desperately dissociating from the body that I felt betrayed me.

I couldn't tell you exactly how it happened, but somewhere between all the doctors, academia, and weed that I smoked to numb myself to everything, I realized the seed of fear planted deep in me was rooted in the condemnation of queerness that I witnessed all those years ago. I kept wondering: How could I possibly die without ever falling in love? I don't mean puppy love. I mean spirit-altering, honest, I almost can't stand how I feel about you kind of love. Throughout my treatment, I became acutely aware of the fact that up until then I had never been in a healthy romantic relationship that didn't hinge on my performance as a femme woman. I decided that if I conquered cancer, I had to dare myself to experience something deeper than Bridget Jones love, but far less complicated than When Harry Met Sally.

Getting comfortable with queerness has been a project many years in the making for me, but going through something so serious early in my life instilled a sense of urgency in me that I needed to be honest about my sexuality. I had no choice but to conquer my health complications, and the confidence I gained from realizing that I was more than strong enough to deal with something I feared more than anything allowed me to relinquish fear of my family disowning me, and prioritize myself in real time. I love my family, but if they can't love me for who I am in totality, that says more about them than me. I will never understand why I had to be so afraid of my attraction to and desire for women? Like, seriously: I still don't get it!

The more I've grown into spaces where fellow queer Muslims exist, the more I relinquish any fallacy that I'm an unlovable oddity.

I understand now that it's not that I wasn't strong enough: it's that I didn't have the right support system to love me just as I am. Contrary to what Western media will preach, Muslims aren't inherently judgmental and our religion does not explicitly condemn queerness. Like most things in a sacred text, a lot is dependent on personal interpretation. In my day-to-day, I am empowered most by doing what my family was incapable of modeling for me: bridging the gap between queer and Muslim identities using radical love. The more I've grown into spaces where fellow queer Muslims exist, the more I relinquish any fallacy that I'm an unlovable oddity. If my chosen family are folks whom I hold in the highest esteem and I believe deserve love, support, and recognition, then why can't I be included among them as just as deserving?

Radically loving myself in the aftermath of my diagnosis has meant ensuring I claim as much love as I give to others.