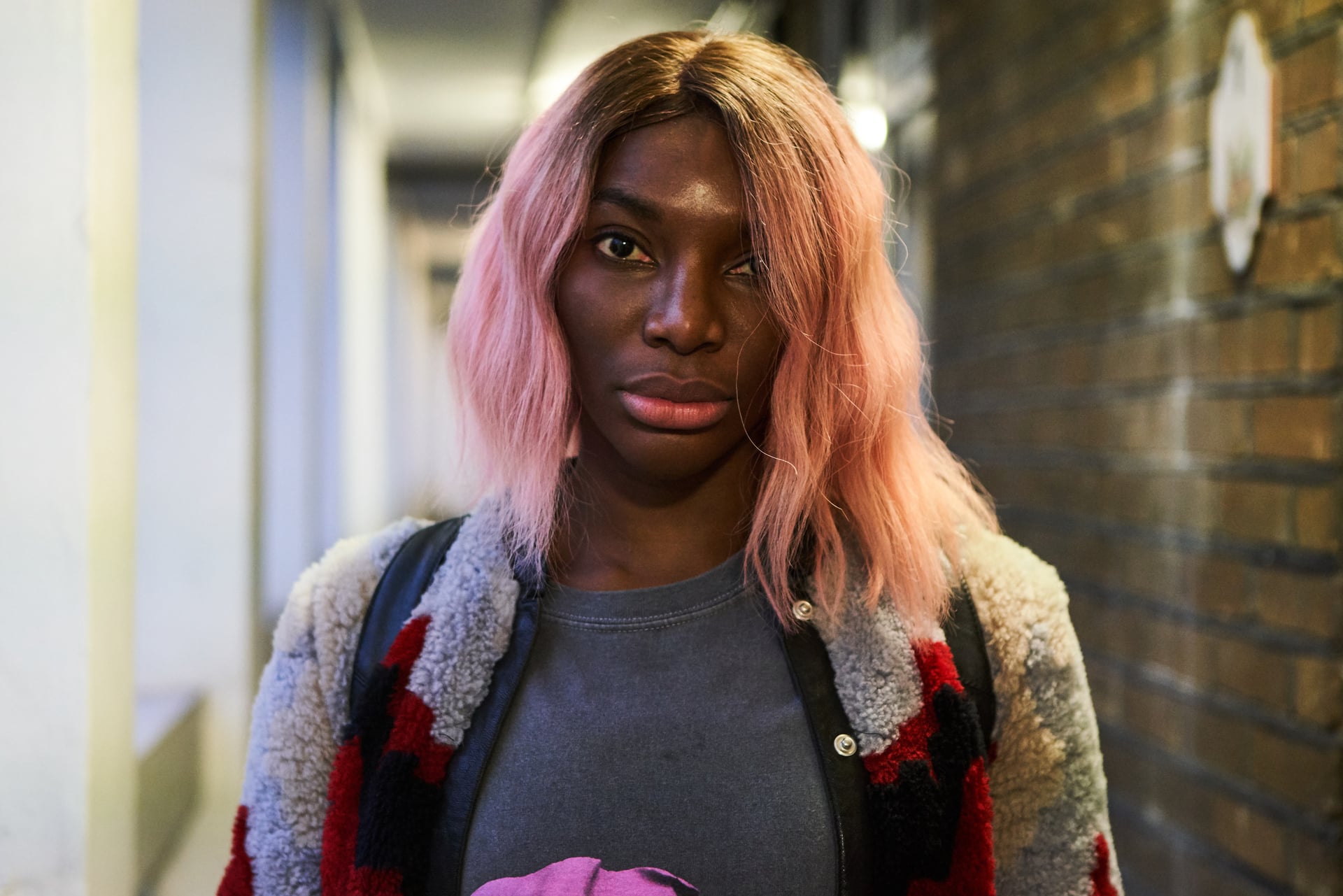 People don't really . . . talk about period sex. It's not something that comes up during Sunday brunch with girlfriends or in hot and heavy romance scenes. Like a family member with a light albeit apparent hoarding addiction, it's something known but never spoken about. Even filmmakers — the great arbiters of culture and artists of the screen — do not dare invite the red devil into the bedroom. But Michaela Coel, who revels in humanizing her bathroom visits on screen, does talk about that-which-shall-not-be-named in her renowned HBO series, I May Destroy You, and its only one of the deluge of reasons why TV aficionados are singing her praises.

I May Destroy You is about many things: sex, intimacy, consent, rape, and evolving relationships in the midst of recovery. Coel, the series creator, writer, director, and star, weaves her narrative on a tightrope, jaggedly pivoting in a nauseating, transient dance until your internal compass has lost all moral direction. She relentlessly dizzies the audience with a bevy of devices varying from humor to silence to most prominently sex. But while all of these scenes come together perfectly on screen, there is so much work that goes into them behind the scenes. Tasked with bringing these story-building sex scenes to life — many of which illustrate sexual assault — Hollywood intimacy coordinator Ita O'Brien sought to choreograph Coel's vision while caring for the cast's emotional and physical needs. "She had the detail of each of those scenes so clear, and I'd say 'Great, we can honor that,'" O'Brien told POPSUGAR.

Far from the typical sensationalized, glossy sex scenes in romantic dramas, Coel drizzles an air of happenstance over scenes such as these, lowering the hurdle to relatability.

O'Brien began formally working as an intimacy coordinator a few years ago, most recently lending her talents to shows like Sex Education and Normal People. Grounding her intimate choreography on the personal boundaries of all talent and crew involved, she implements a clear structure that dissipates the uncertainty and fear actors can face while filming nude scenes. Especially considering that I May Destroy You, a series focused on Coel's character Arabella's sexual assault and ensuing path to healing, is based on Coel's real-life experience of drug-facilitated rape, clarity and comfort were essential for actors and crew to remain emotionally and psychologically secure.

One of O'Brien's favorite moments from the series was one that sent Twitter into a frenzy: the period scene from episode three, "Don't Forget The Sea." Women experience periods for roughly half of their lives, and odds are some of that time spent menstruating is also spent being intimate. But that taboo experience of period sex hardly ever makes it into a script. In the scene, Arabella and her Italian, drug-dealing lover Biagio (Marouane Zotti) initiate sex after she tells him she's on her cycle. They fall into foreplay anyways, which eventually leads to him endearingly asking if he can remove her tampon.

The prop tampon was slyly placed under Coel's thigh, and O'Brien coached Zotti to pull it out with a believable amount of resistance. After it's removed, the sexual mood is ruined when Biagio becomes fascinated with and squishes Arabella's blood clot, which was another ingeniously crafted prop. This scene epitomizes the nonchalant style of intimacy Coel wanted. Far from the typical sensationalized, glossy sex scenes in romantic dramas, Coel drizzles an air of happenstance over scenes such as these, lowering the hurdle to relatability. "I love the incidentally of it. This flowing, natural normalness," O'Brien said.

Related:
11 Movie Sex Scenes That Are Empowering For Women

Episode four, "That Was Fun," features one of the show's most groundbreaking (and heartbreaking) scenes, in which gay character Kwame (Paapa Essiedu) is raped by a man he met on Grindr right after the two had consensual sex. The cast rehearsed the scene for two days, learning every detail and moment by rote until the familiarity overtook the hesitation. "It was really important that we all got together and [found] the right positions that served the gay community," O'Brien explained. "There's one [moment] where I had thighs slightly turned out and they went, 'Uh-uh, it's this way, parallel.' It was really important for those three men to have that in-depth rehearsal."

Another day was spent breaking down the intimate scene in episode six, "The Alliance," where high schoolers Theo (Gaby French) and Ryan (Josiah Mutupa) sneak in a sex session during school, only to have the moment interrupted by the click of Ryan's camera. Though it appears simple, the scene's numerous halts and resets of intercourse complicated the choreography. O'Brien revealed that Josiah was nervous at the beginning of rehearsals, but relaxed after the monotonous repetition transformed the scene from an awkward state of teenage vulnerability to an analytical piece of choreography. Communication and repetition are key to ensuring an actor's capability to perform, but it doesn't erase the lingering dread that accompanies a day full of acting triggering scenes. Lou Platt, an artist well-being practitioner, was brought in by O'Brien to service this concern by talking with actors to decompress them of the day's work and to get them refreshed for the next.

While intimacy coordinators are vital resources to respectfully crafting sex scenes, they aren't nearly as widespread as they should be. Stunt coordinators or dance choreographers aren't overlooked nearly as much, even though intimacy is just as valid a form of storytelling as a fight scene or steamy tango number. "Intimate content is a body dance," O'Brien said. "You have two people in rhythm together telling a physical story." Certain producers don't have the resources or desire to dedicate time and money to extra rehearsals for intimate scenes, but O'Brien argues that rehearsal offers clarity to remove all residual tension and fear from an actor's performance, ultimately enabling them to deliver a full-hearted, authentic scene. "You know there's a professional structure and you're not just going to be left stranded," she continued. "I believe what really keeps an actor safe is filling them up — when they're full of character, full of intention, full of character in relationship, and really honoring each scene."

TV
Ayo Edebiri Shuts Down Carmy-Sydney Ship on "The Bear": "I Don't Think So"
by Eden Arielle Gordon 6 hours ago