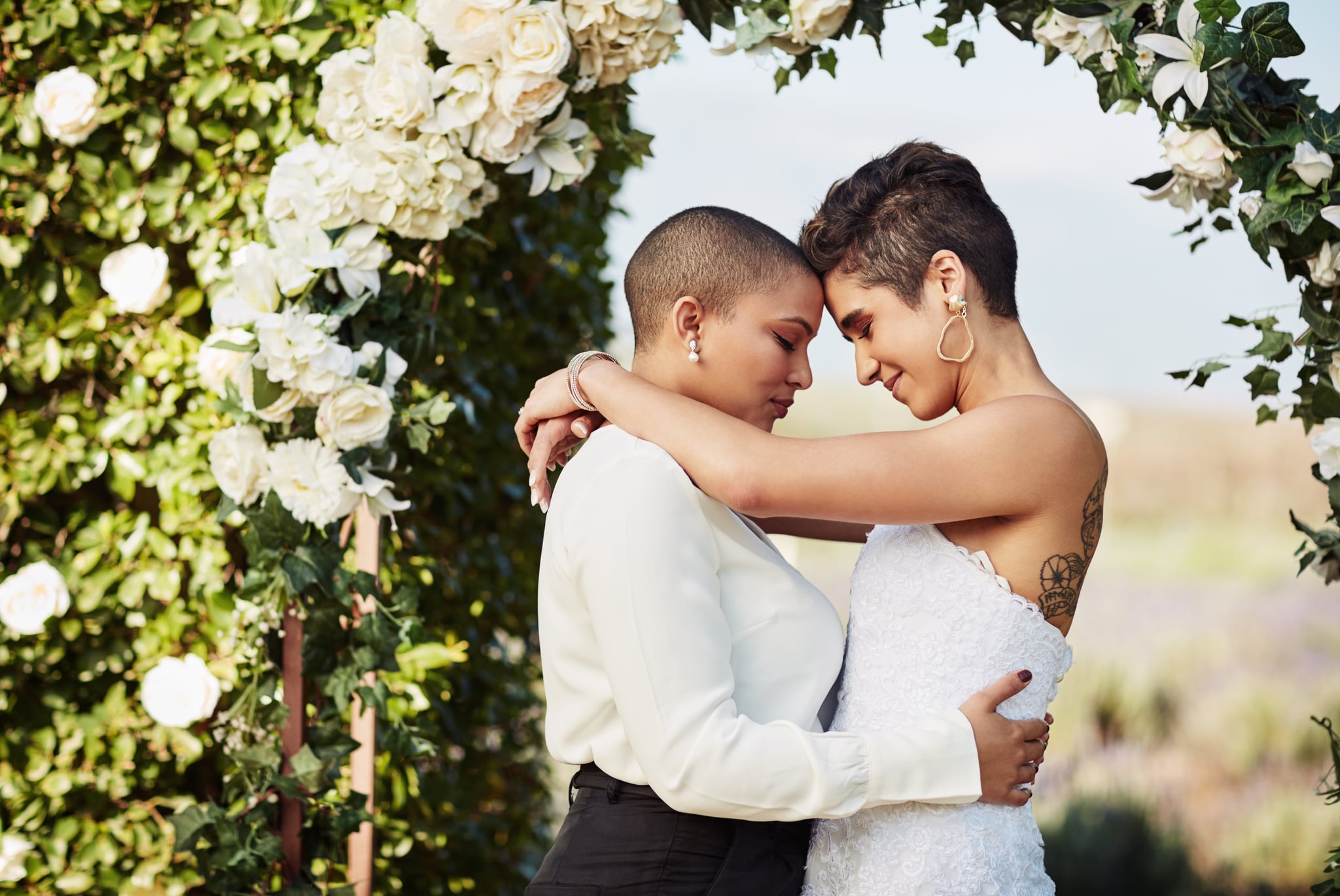 The overturn of Roe v. Wade on June 24 didn't only impact reproductive rights; it also brought fear of a ripple effect. With Roe overturned, other cases that were decided based on its precedent could be at risk of reversal, too. In fact, Supreme Court Justice Clarence Thomas specifically named Griswold v. Connecticut, Lawrence v. Texas, and Obergefell v. Hodges (which ruled in favor of birth-control access, same-sex sexual activity, and same-sex marriage, respectively) in his concurring opinion as cases that could potentially be revisited.

Soon after the SCOTUS overturned Roe, a bipartisan group of lawmakers introduced the Respect for Marriage Act into Congress in an effort to maintain the legalization of same-sex marriage. On July 19, the bill passed in the House of Representatives, but that doesn't mean it's ready to become a law just yet — it still has to get past the Senate. (We don't know when it will be introduced into the Senate, but you can track the timeline on the Congress website.)

But what, exactly, does the Respect for Marriage Act protect? POPSUGAR spoke with Ashley M. Silberfeld, a partner in the matrimonial and family law practice at Blank Rome LLP, about what this could mean for LGBTQ+ couples.

What Is the Respect For Marriage Act?

The Respect for Marriage Act provides protection for same-sex and interracial marriages, according to the official Congress website. Specifically, the bill "repeals and replaces provisions that define, for purposes of federal law, marriage as between a man and a woman and spouse as a person of the opposite sex with provisions that recognize any marriage that is valid under state law." Basically, the act expands the definition of marriage so it's no longer tied to sex or gender and also protects the right to marry regardless of race, ethnicity, or national origin.

The Respect for Marriage Act was put forth as a reaction to the Court's ruling on Dobbs v. Jackson Women's Health (which overturned Roe) because the justification SCOTUS used to rule against the right to abortion, in this case, could also be used to reverse the precedents set by Griswold, Lawrence, Obergefell, and Loving v. Virginia (a 1967 case that ruled state laws barring interracial marriages were unconstitutional). So even though the Supreme Court ruled in 2015 that state laws barring same-sex marriages were unconstitutional in Obergefell v. Hodges, the court's decision in the Dobbs case means SCOTUS could use that rule to overturn Obergefell in the future. The goal of this act is to protect the right to marriage for same-sex and interracial couples in the event that Obergefell or Loving is overturned next.

What Would the Protection Mean For LGBTQ+ Couples?

The Respect for Marriage Act, if passed, would mean that marriages of LGBTQ+ couples are legal and constitutionally protected regardless of which state they live in. Right now, same-sex marriage is legal nationwide because of the Obergefell v. Hodges case. In that ruling, the Supreme Court struck down all state bans on same-sex marriage, making it legal in all 50 states and requiring states to honor out-of-state same-sex marriage licenses.

However, many states have anti-LGTBQ+ marriage laws that have been lurking under the surface of the current federal court ruling. If Obergefell is overturned, state governments with those laws can refuse to recognize the marriages of same-sex couples and exclude future couples from marriage — that is, unless the Respect for Marriage Act is passed.

"The Respect for Marriage Act is groundbreaking in that it's affirmatively breaking away from the more 'traditional' construct of marriage," Silberfeld says. "It also creates rights for the Department of Justice to bring charges against violations of the law, as well as private rights to sue for such violations. Having such rights included, in my opinion, shows the legislators' intentions — that they are really serious about protecting the rights of marriage for all individuals, period."

How Does Codifying a Bill Protect Same-Sex Marriage?

The passage of the Respect for Marriage Act would codify same-sex marriage. Codifying a bill means it becomes a federal law that must be implemented and followed and for which people can be prosecuted if they violate it.

"While this bill is definitely a step in the right direction to protect all marriages, there's still a possibility that if it becomes a federal law, it could be overturned by the Supreme Court," Silberfeld says. "Our system is one of checks and balances, so while the legislators can make a law, the Supreme Court has the ultimate power to review whether that law withstands constitutional muster." Theoretically, SCOTUS could overturn any codified law that legislators pass if they deem it "unconstitutional."

How Can LGBTQ+ Couples Protect Their Marital Status?

"I would encourage these couples and all of us to get involved in supporting this kind of legislation in the days, months, and years ahead," Silberfeld says. That means, for example, voting and letting your representatives know which issues are important to you as a constituent.

And remember: if the bill does not pass now, same-sex marriage rights still stand as long as Obergefell v. Hodges isn't repealed, and it does not mean the issue can't be addressed in another bill later.