This post was originally published on The Dumpster Dog Blog.

Throughout my early twenties, I was a real nincompoop about saving money. Every dollar that met me was skulled, snorted, dumped into the SF rental market or just generally cast into a roaring tire-fire of twentysomething recklessness. (Well, except for 401k savings, which I wouldn't dare touch.) I had disappointingly little to show for years of hard work — unless you count an exceptional set of premature under eye wrinkles and one masterfully curated costume collection: 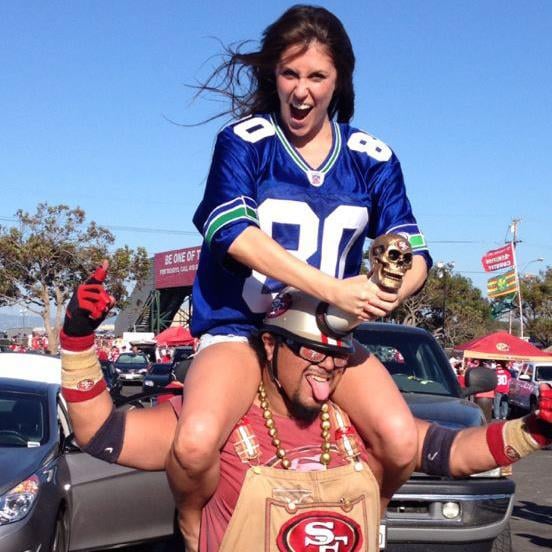 This made the moment extra-sweet. My sh*t was together and I stood ready to quit a job that I hated. My boss sat across from me in a conference room as I broke the news. He cocked his head to the left and looked me dead in the eyes, surprised by the words about to leave his own mouth:

"Yes. This is why I have been eating trash." He took another few seconds to digest.

"Is this why the guys call you Dumpster Dog?"

My boss wasn't exactly surprised by the news, my unhappiness long palpable. He just hadn't realized that my one foot out the door was in direct alliance with the hand on my colleague's half-eaten burrito. Awash with a new understanding of my curious behavior over the previous eight months, but still at a loss for words, he awkwardly commended my dedication — he had personally witnessed me pull food from the garbage twice.

Hey, thanks for noticing, Boss.

Eight months earlier, I decided that I wanted to quit. But without money, I was tethered to the job. Perhaps luckily for me, that place and its fluorescent lights and corporate d*ck-sucking crushed my soul so hard that a dramatic move was the only hope for restoring élan vital. My other option was drinking to death.

Considering my disdain for the field, I determined that travel and reevaluation made more sense than hopping to another job I hated. My goal was to leave within 6-8 months with at least $20,000. It was going to be a mighty challenge on my 27-year-old's salary, but not undoable.

Now, my journey down the path of restricted consumption didn't begin with pizza crusts and restaurant leftovers (to be clear, not my leftovers); I kick-started my savings plan with more obvious methods of pocketbook tightening: No more shopping and no more ridiculous social life.

Shopping had to go. No more spending money on things. I had plenty of things. Quitting shopping cold turkey is hard as hell to do — it's an act from which we are conditioned to derive pleasure. This is particularly the case for us ladies, who are trained by advertisers, celebrities, corporations, society, et al. to believe that without the latest, hottest styles and most expensive beauty/anti-aging regimens, ain't no cowboy'll ever wanna touch our cooters.

I strained clear my social calendar. This one stung like Wild Turkey 101 in the open wound of a party injury, but was essential. I wasn't going to stop meeting my friends out for beers, but I had to quit the weekly concerts, Giants games, and waking up with $300 charges on my card after wild nights at the Boom Boom Room. I skipped all group trips, out-of-town celebrations and bachelorettes, and missed my ten-year high school reunion.

Further, there were no haircuts, no gym membership, no coffee, and I would stretch time between laundry loads for months on end (okay fine that wasn't new). Still, I was scared that it wouldn't be enough. I asked my best friend at the firm for some advice. Lisa, who was pregnant at age seventeen and is currently raising a daughter all on her own, is one scrappy motherf*cker. I told her my goal and my timeline, and here's the sage-as-hell piece of advice she gave to me:

"Mandi," she said. "You just need to get in there and eat some f*cking trash."

Like a cold falafel wrap clobbered across my cheekbone, the idea hit me hard. It . . . was . . . BRILLIANT. Lisa adduced the obvious: I worked with hundreds of finance dudes, and on the net, these guys buy way more food than they can physically consume. Instead of spending my own money on breakfast and lunches, she encouraged me to gobble up their excess instead. I was vaguely aware of the "living off the excess of others" and "freegan" movements but never thought to apply their principles to my own life and attempt at saving money. I was totally in. And so:

I eliminated spending money on food, as much as I could, without going hungry. It wasn't long before I had taken on the challenge as personal for several reasons. First, I wanted out of that place so bad that eating debris didn't seem that weird to me. Second, Americans are sh*tty-little-*sshole wasters when it comes to food consumption, and the office place is a breeding ground for this behavior. It was a duel pleasure to work towards my savings goal and take the tiniest personal stand against excess in an industry that so often celebrates it.

(My company was NOT one of these Silicon Valley joints that offered free food. Hell no. It was not Google, there were no snacks. There was drip coffee and a good 401k match, but definitely not snacks.)

To pull this off, I first conducted a series of company-wide scouting reports. I learned what departments did potluck breakfast on what days, and kept the bimonthly fridge clean-out schedule printed out on my desk. Every other Friday evening, I'd mosey into the kitchen just a few minutes before the janitors and collect my bounty. Hot tip: Check the company fridge, it is a straight graveyard of forgotten Greek yogurts in there! I survived many a weekend on abandoned Chobanis.

Not long into my lifestyle change, I let a few of my work buddies in on the challenge. They were incredible, generous in both spirit and half-sandwich. By the end, some of the guys were so interested in my small socioeconomic experiment that they would go out of their way to share with me, totally unprompted. I learned that some people just love to share! Those are the people to be friends with, anyway. The week before I quit, I came back from a meeting and was greeted by a large, greasy, brown bag sitting on my desk. Inside were fifty chicken wings. There was no note, but I knew who they were from. 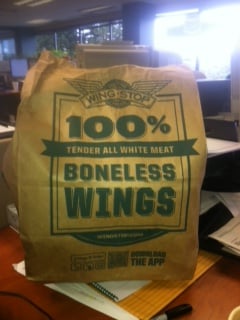 Nourishment for the week.

Every Friday, these same guys went to an all-you-can-eat pizza buffet. I wanted to join, but couldn't because I wasn't spending money. They'd vow to smuggle a few pieces out for me — but it's basically easier to sneak a switchblade into the Pentagon than it is to pack away to-go slices at a suburban Round Table Pizza during buffet hours. Despite the overwhelming risks, they'd slide a couple o' buttery breadsticks into the pockets of their business trousers so that I too could enjoy a warm lunch. (This post is dedicated to my Breadstick Boyz and all my FI guys, you know who you are.)

They fondly referred to the Round Table contraband, and eventually to me, as Trash Sticks. If they weren't calling me Trash Sticks, it was Dumpster Dog, and they still call me Dumpster Dog 'til this day. It's so nice. I feel that it really suits me. (For more on why see my About page.)

The day I put in my two-week notice goes down as one of the best in my life. Feeling that financial freedom is a high that can't be matched by any drug (I tried) or drink (I tried) or material purchase (I tried). I had an inkling that the short-term sacrifices would be worth it, but the euphoria I felt far exceeded my expectations. 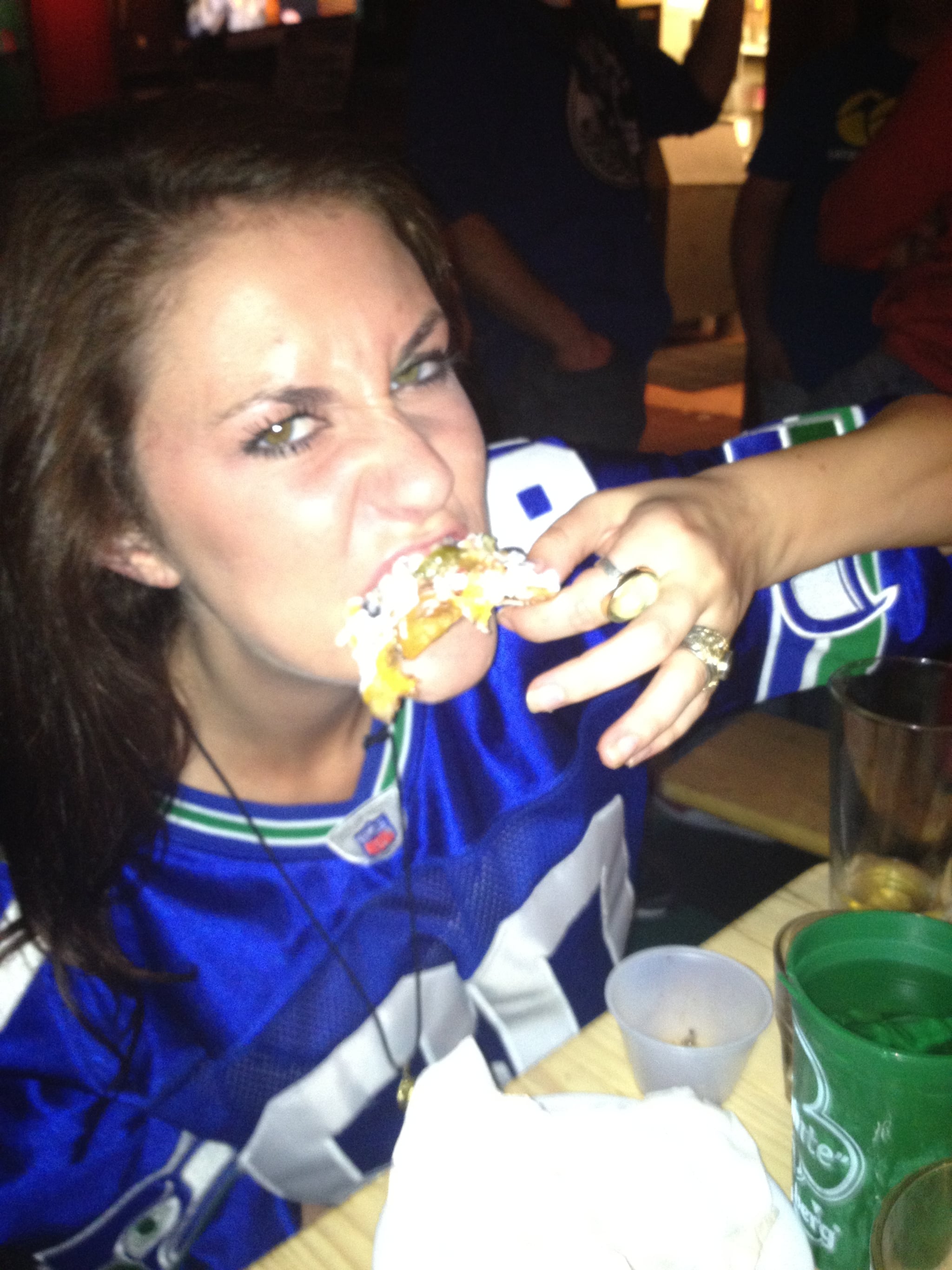 The Dumpster Dog out of her cage and on the loose!

I mostly tell you this story because it's silly and I want you to know the origin of Dumpster Dog since it is now the name of my scrappiness-and-truthfulness-themed finance blog! But if you were going to walk away from this dog tale with a few thinkin' nuggets, I'd like these to be them:

Getting people to buy you food is not a real cost-cutting measure, and I don't suggest it for anyone. That would be dumb (although . . . I hear Tinder is good for that). The reality is, there are specific situational reasons it worked for me (e.g. it didn't hurt that I was one of like, three females in a department of 200). More so, my hope is that — if you struggle to save enough — this story inspires you to reexamine the ways you spend money without even realizing it. I'll be the first to admit that money used to fall out of me like a loose sh*t after a night of whiskey drinking, but to change my life I had to, well, change my life. I got creative and it was totally worth it.

Great things are possible if you're able to take a fair look at the way materialism keeps us from achieving our financial goals. Materialism is the elephant in the room that no financial adviser wants to touch, but we must! You'll hear me say this a lot, but the less we spend, the more money we save. The more money we save, the less we have to work. To me, I want money because I want freedom. I want experiences. And every time I buy an $80 blouse, I am farther from my goal of being free. It's hard to practice this every day, and I don't always succeed. But if you really believe it to be true, sacrifice and saving become much more tolerable.

Clearly, what I did was small in scale and for just a short period. Saving for something huge like retirement requires the stamina and resolve of about twenty Dumpster Dogs! Still, I hope that you can see how the Dumpster Dog mindset is useful for long-term saving. So while I am NOT suggesting that you backstroke through bear claws in the dumpster behind the local bakery (although, that would be kind of awesome), I AM suggesting that making some short-term material sacrifices will undoubtedly result in longer-term happiness. Whether you are working to pay off debt, buy a home, save for retirement, or start a business, I encourage you to keep on. The things that matter are rarely the material things sacrificed and reward does come. 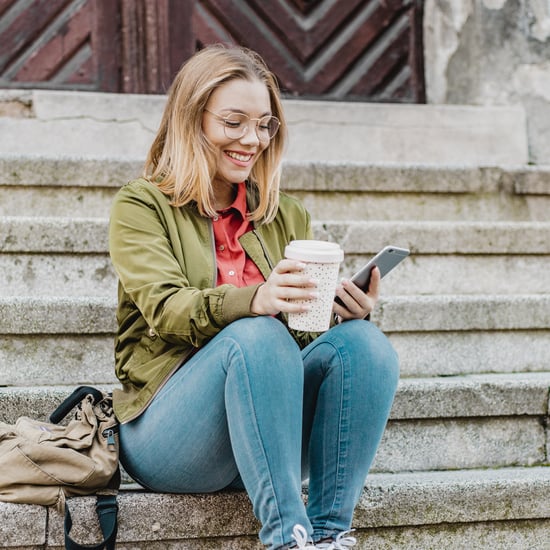