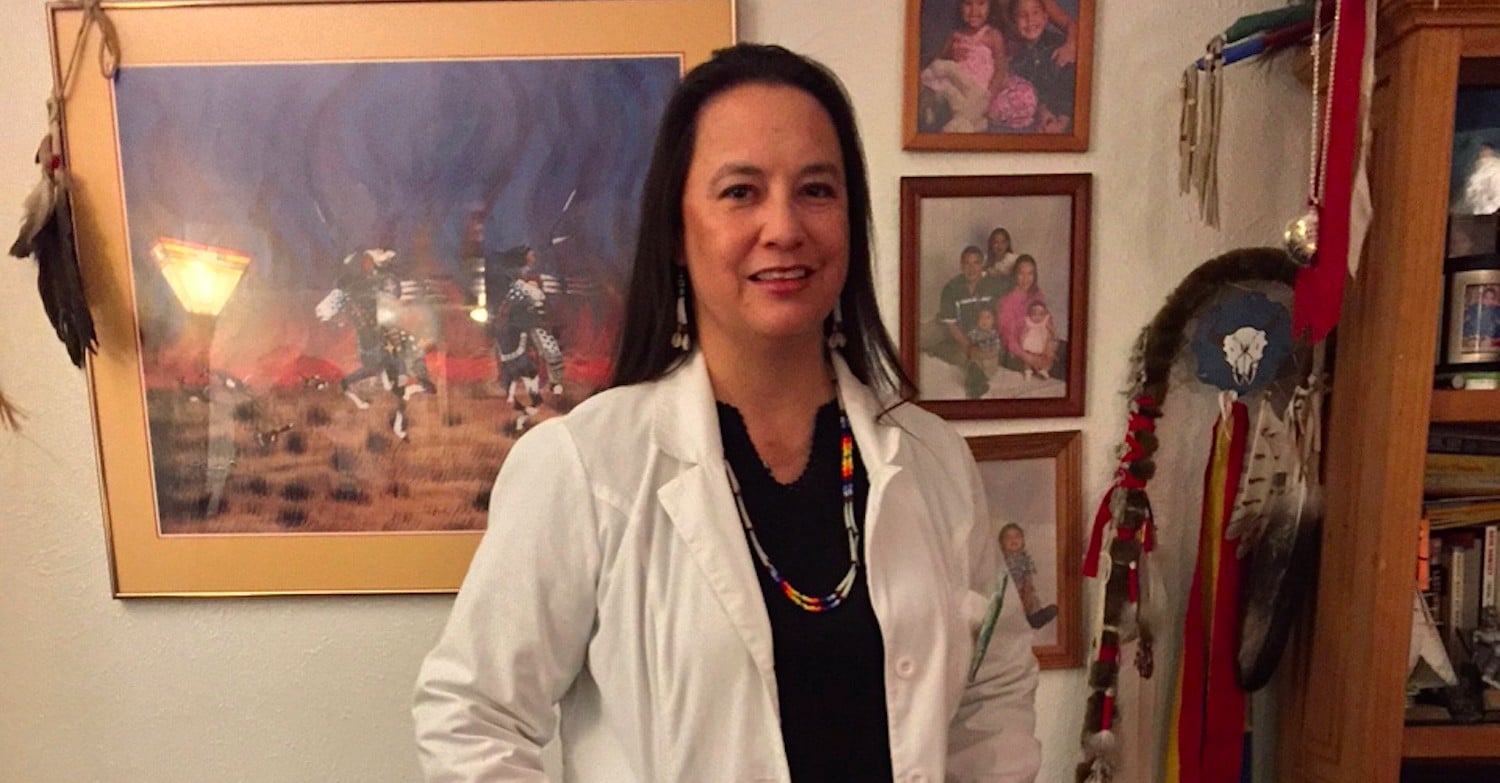 Sara Jumping Eagle is a pediatrician, a mother of three, a member of the Great Sioux Nation, and an activist to be reckoned with. On Feb. 27, Donald Trump and the Army Corps of Engineers were slapped with an emergency lawsuit over the contentious North Dakota Access Pipeline, and Jumping Eagle is its lead plaintiff. In late January, Trump issued an executive order to expedite the pipeline, following a hard-won victory by protesters to stop the construction late last year. But Jumping Eagle continues to fight. She is one of more than a dozen Oceti Sakowin, or Great Sioux Nation, tribe members behind this latest legal action, which demands an immediate halt to construction on the pipeline.

Jumping Eagle's lead counsel, Bruce Afran, says the lawsuit is two-pronged. In a statement to POPSUGAR, he wrote: "The Tribal Members are alleging that the Trump administration failed to make any, let alone, adequate environmental findings, to support the grant of an easement allowing oil to flow under Lake Oahu, a waterway in which the water rights are still retained by the Sioux Nations and that is their exclusive source of drinking water. The Tribal Members also allege that the easement violates their religious practices because Lake Oahu is the source of sacred water necessary to the Lakota faith." The White House has not responded to POPSUGAR's request for comment on the suit.

We spoke with Jumping Eagle about why she's persevering, what she wishes more people understood about the threat the Dakota Access Pipeline poses to the Standing Rock Reservation, and her message for Donald Trump.

POPSUGAR: Give us the nuts and bolts of this latest legal action.

Sara Jumping Eagle: We are pointing out the fact that the United States government and the Army Corps of Engineers are violating the public interest of protecting our communities, which are already at risk. We have huge health disparities. We live in a county that's one of the poorest counties in the nation. It's active, systemic racism to put more of the health risk at our peoples' — our community's — feet.

If they were going to run a pipeline through Bethlehem or through the Arlington Cemetery, I think people would have a lot to say about that.

PS: This filing takes the president directly to task. If you could get him in a room for 60 seconds, what would you tell him?

SJE: The main message would be that our communities have suffered enough. We've borne the brunt of corporate profits for generations now. We've contributed to America. We've given up lands, and part of those negotiations were for our treaty territories. And now, once again, the United States is going to violate those laws, and then label water protectors as being illegal. It's basically a choice of which laws they feel are more important in that moment in time to get what they want, which is to profit off the backs of our communities.

PS: Why do you consider the Dakota Access Pipeline project a case of racial discrimination?

SJE: There are so many facets to this case. Not only environmental; [there's] systemic racism, public health issues, and environmental health issues that have simply been looked over in favor of corporate profit.

PS: What do you wish more people understood about your tribe's connection to these lands?

SJE: This area is a very sacred place. There are generations of people who have held ceremonies there. There are tribal stories passed down generations about the specific place where the Cannonball River and Missouri River meet. Because of the movement of the waters, it causes development of sacred stones in and along the river, and those were used for ceremonies. There are many rock formations that are thought to be grave sites and places of prayer also. That is exactly where they're building this pipeline. If they were going to run a pipeline through Bethlehem or through the Arlington Cemetery, I think people would have a lot to say about that.

PS: Key to your argument is the environmental threat posed by a pipeline project of this scale. What would a leak in a pipeline of this magnitude mean for your people?

SJE: Well, we've already had several examples; the Kalamazoo River spill [from 2010] still has oil seeping up from the mud and showing a sheen on top of the river at different times. That still hasn't been cleaned up. We know there was a pipeline buried under the Yellowstone River, and the river shifted, and that led to erosion that exposed the pipeline, and that led to a break in the pipeline. Companies in the state of North Dakota have answered this by saying they'll install pressure valve monitors as a safety measure, but we know [with] the leaks that have happened, as in North Dakota, those valves have failed. They're dependent on pressure changes that can take up to 15 minutes to get the information to the company, which is based in another state, to then shut it off. By then, there would be thousands of gallons leaked into the Missouri River, which does serve 18 to 20 million people downstream. It would affect generations afterwards; it's just difficult to reconcile.

PS: Women have really been the driving force behind this movement. They were the first ones stopping the trucks back in August! Why do you think women have been so central to the cause?

SJE: Many women, and specifically Standing Rock community members, really stood up from the get-go, saying, "We don't want this pipeline here." We attended public hearings, and basically the company came to the tribal administration office and just said what their plans were and showed the community the map, and that was in 2014. There were at least 50 community members there who stood up and said, "No, we don't want this pipeline here." People told not only of the sacred sites in this area, but also the historic sites. Women have voiced opinions. For LaDonna Brave Bull Allard [founder of the Sacred Stone Camp], her son is buried there. So it's really an important place for her and her family to protect.

PS: This has been such an effort on behalf of your tribe, at great personal cost, and with several setbacks so far. Why haven't you stopped fighting?

SJE: Because we know what will happen if there is a spill. We're looking at our children's faces. What legacy do we want to leave for our children? How can I know that, in my daughter's time, she will have water for her children? That she'll be able to live in the place where her ancestors have lived? There are places around here where we collect sacred food and plants, and all of that is dependent on the water, so we know how important the water is to this community. We're fighting for our children's future.

PS: How can people reading this help support your effort?

SJE: Calling your senator, congresspeople, the Army Corps, the Martin County Police, and North Dakota governor to voice opposition to not only the pipeline, but also the injustices that have taken place against free speech, the constitutional right to assemble, and multiple civil rights. People can also learn more about this lawsuit and help crowdfund our legal effort by visiting RevolutionTruth.