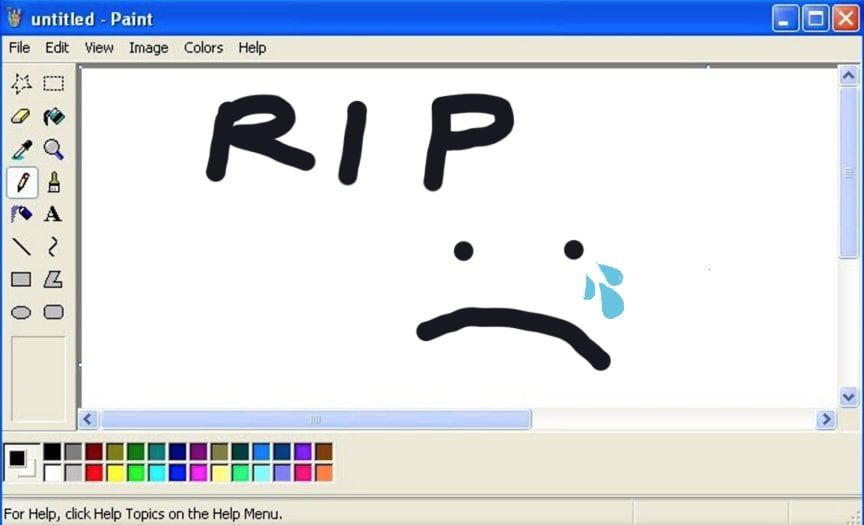 Update: After a day of nostalgia-fueled speculation and "an incredible outpouring of support," Microsoft addressed Paint's status in a post on the Windows blog on July 24 — and it couldn't possibly be better news. "MS Paint is here to stay," the post reads. "It will just have a new home soon, in the Windows Store where it will be available for free."

Original Story: Microsoft Paint is an OG program. From saving screenshots to touching up photos to adding snarky comments to doodling at your desk, it can do almost anything that you might need a digital blank page to do — all without the need for any knowledge of how to do anything aside from use a mouse and with a price tag of $0. For over 30 years, it's been on every single Microsoft computer in the world. But the beloved program — which existed before the word "app," back when applications were called programs — is about to see its glorious reign come to an abrupt end.

On July 24, it was widely reported that Paint would no longer be part of Windows 10 and would be removed from the roster starting with the platform's Fall update. From a business perspective, the decision makes sense — Paint doesn't really have the chutzpah to be able to compete with Photoshop or the bajillions of free image-editing and note-taking apps in the App Store. From a user perspective, it's total madness.

Paint is one of those things that pulls on every single nostalgia string imaginable. It hearkens back to a time when computers were what your parents did fancy numbers-and-words things on before passing it over to you, the kid, who would go nuts making a masterpiece out of pixelated lines, paint buckets, and clip art. That masterpiece would then be printed out on multiple pages — the size of the image was never quite right for just one — that would then be cut and pasted together and hung half-hidden under the garbage collection calendar on the fridge.

The Paint relationship didn't end with childhood, though. When you finally grew old enough to do fancy numbers-and-words things yourself, dressed in business casual and seated behind a clunky desktop PC that maybe-probably gave you migraines, it was the ultimate escape — an ever-present chunky colored line to spin in circles as you yawned through conference calls, the box that allowed you to make screenshots of all your creepy ex's emails without showing that you started the conversation in the first place, the perfect way to add a caption to that heinous baby photo that got sent to basically everyone and their mom . . . .

If speculation proves correct, as of this Fall, no future generations will be able to experience the thrill of mind-vomiting into a classy beige box. And like so much that has happened in 2017, it serves as further proof that we can't have nice things — or, perhaps, that we need to stop mucking around on our computers and make real substantive change in the world before we can earn the right to doodle.

It's not all bad, though. Paint will retire to its final resting spot alongside some very good company. It will be buried next to the other senseless casualties of this turbulent year, right beside the American fight against global warming, the yearly presence of Game of Thrones, and the option to remain invisible on Gchat. RIP, old friend. You will be missed.