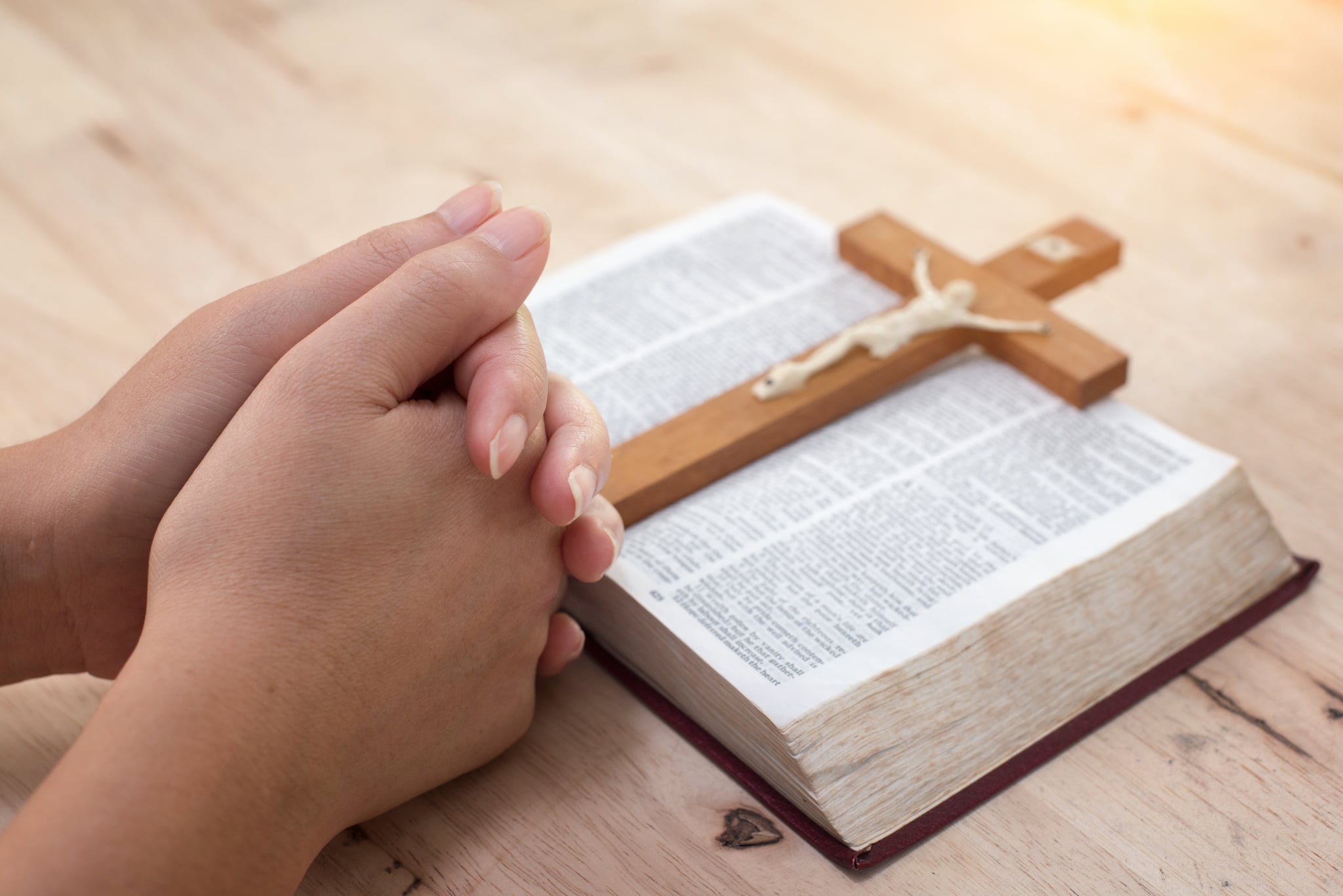 I had my first encounter with our nation's abortion debate on an otherwise unremarkable day when I was about eight.

The details are fuzzy — I don't remember where I was exactly or where my mother and I were driving to — but I starkly remember the protest signs bearing graphic images of aborted fetuses surrounding our car. I remember crying, terrified, in the back seat. Despite this experience, I wouldn't learn exactly what the word "abortion" entailed until long after I was sent to Catholic school.

From 5th grade until I left for college, I wore some version of plaid and studied hard to ensure my theology grade did not drag down my GPA. On mass days, classes would come second to sitting in pews and being berated for not closing our hymnals quietly enough. I joined the choir and eventually become a cantor both out of my love for music and because any Catholic school chorister will tell you it makes time fly. We would pray for all the saints, the ill, the dying and deceased, our neighbors, and the unborn babies.

Our sex education was limited to "don't" and "but only in marriage to make children," once in 5th grade and once in 8th grade. As a sophomore in high school, one health class period was devoted to discussing sexually transmitted infections. To this day, I can't spell chlamydia without looking it up — or explain how it differs from gonorrhea. There were no lessons about birth control (outside of abstinence, of course), and no talk of how to negotiate the tricky sexual politics we, especially the girls, inevitably would face.

"Even after I left the Church in my late teens, I struggled to reconcile my progressive perspective with my inner conflict about abortion."

Each January, I would watch some of my peers, teachers, and parent chaperones board a bus to march for life in Washington, D.C. I'll admit I didn't quite understand why anyone would willingly stand out in the cold and (sometimes) inclement weather just to prove a point. That being said, I was one of half a million people walking, chanting "my body, my choice," and waving signs to protest the Trump administration at the inaugural Women's March in 2017. Things change. Perspectives change. People change. I know I did.

But getting to that point in an environment that precludes discussion of complex moral issues, and actively perpetuates harmful rhetoric about women's bodies and choices, is not simple. Growing up, my standing in the anti-abortion camp was a given — though, much like sex, never talked about. For much of my adolescence, abortion was a bogeyman — the A-word that represented the ultimate transgression and gravest of sins for women: ending a life and placing her own above another's. In that silence, as there so often is with silence, there was stigma and shame.

Shame is an effective tool. Feelings of guilt can be so potent and insidious that even those, like myself, who leave the capital "C" Church find themselves wrestling with the cultural and religious lessons they internalized as children. Rather than reveal our shame for the world to see and potentially stigmatize, we stay silent and hide our questions, our traumas, and our dissent.

Even after I left the Church in my late teens, I struggled to reconcile my progressive perspective with my inner conflict about abortion. It wasn't enough that I felt like a bad Catholic for questioning the Church's and my formative community's stance on women, sexuality, and gender. I also felt like a bad feminist for even having to think about whether I believed in a woman's right to choose what is best for her over what had been drilled into me for years — that life begins at conception. But what about her life, I wondered.

It's more than religion, though. Our culture wrongs women continuously in many ways, including thrusting upon us the expectation that motherhood is our ultimate and most sacred of destinies. In school, this expectation was telegraphed to us constantly ("Hail Mary . . . blessed are thou among women"). Then there was the only viable alternative as communicated to us by male priests: becoming a nun.

Even today, when I share that I am not considering or planning for children in my future, I am told that I will change my mind or even met with outrage. This reaction is spurred in part by our societal belief that women must put the needs of others above their own, and that to do otherwise for any reason is not only selfish but shameful. This stigma exists even in spite of research from the Guttmacher Institute finding that 59 percent — nearly 6 in ten — of women having abortions in the United States are already mothers.

"There was no single defining, light bulb moment when I stepped over the no man's land between anti-abortion and pro-choice."

Let me be clear: there is nothing wrong about wanting to be a mother. Just as there is nothing wrong with not wanting to be a mother. Having that choice, however, is vital to helping us as a culture overcome this idea that women are meant for a specific biological and emotional destiny. That women cannot and should not be the center of their own lives, even for a moment.

There was no single defining, light bulb moment when I stepped over the no man's land between anti-abortion and pro-choice. My realization that I believe wholly and passionately in a woman's right to choose was something that came to me as gradually as watching snow cover a lawn. My views, however, were tempered in the furnace of the 2016 election and the anti-woman, anti-choice policies and rhetoric that dominate our daily cultural discourse ever since.

Today, we face an administration that is more openly hostile toward abortion than we have ever seen. Political candidates openly run on promises of overturning Roe v. Wade, the landmark 1973 Supreme Court decision that effectively legalized abortion nationwide, and which these politicians and their constituency view as a moral blight on our country. Supreme Court justices are nominated (and confirmed) in part because they have records indicating they will support an anti-abortion agenda.

Critics calling for the government to "defund" Planned Parenthood (for which abortions make up approximately 3 percent of all the organization's services) fail to seriously consider the ramifications for those who rely on Planned Parenthood's necessary cancer screenings, birth control, STD testing, and both sex and reproductive education services.

States like Missouri, Kentucky, Utah, and Tennessee continue to pass abortion restrictions devoid of scientific evidence that tie up clinics and providers in red tape with the explicit purpose of making abortions more challenging or even outright impossible for some women (especially women of color) to access. These targeted legislative hit jobs have led to the rise of unethical crisis pregnancy centers, which are notorious for using coercive tactics to counsel reluctant women against abortion. This past June, the Supreme Court ruled 5-to-4 that these centers need not provide abortion information to pregnant visitors.

Finally, inaccuracies and flat-out lies about abortion — that having an abortion will hurt a woman's future fertility, or that women who have abortions are more likely to suffer mental health issues or develop breast cancer — continue to perpetuate a toxic cycle of shame and ignorance.

The truth is, despite declining rates, abortion is a common experience for women in the United States, as nearly one in four will terminate a pregnancy in her lifetime. In fact, it's so common that Catholic women have abortions at relatively the same rate as all women. The reasons for terminating a pregnancy can be complex and related to a multitude of personal, medical, and socioeconomic factors beyond whether the woman is for or against abortion. Arguments that rob women of the choice to prioritize their own bodies, desires, and lives reduce women to being of second importance.

Some in the anti-abortion movement will argue that they believe women deserve better than abortion. I agree with them on part of that sentence: that women deserve better. My counter argument is that abortion — much like comprehensive health and reproductive care, policies that mandate paid family leave, and unfettered access to birth control — can be part of that better for women living in a society that purports to value freedom and choice, but only for some.

To be transparent: I have never had an abortion because I have never been pregnant. This fact, however, neither discredits my opinion nor discounts my voice.

I also have never before had this discussion out loud and with other women. It was only at this most recent Women's March, as I walked with my friends in the cordoned-off streets of Washington, D.C., that I brought up the subject in an effort to organize my thoughts. After all, it was an appropriate setting.

On our way to the gathering point, we stepped over remainders of the previous day's March for Life. Anti-abortion stickers stuck to metal sign posts. A box three-fourths-filled with leftover anti-abortion posters. Discarded flyers and buttons being swept up in the street. To me, they were strange reminders of the life I had once lived. A life I left for one of choice and possibility for myself, my sisters, the women I do and don't know, and, should I choose to have them, my daughters.