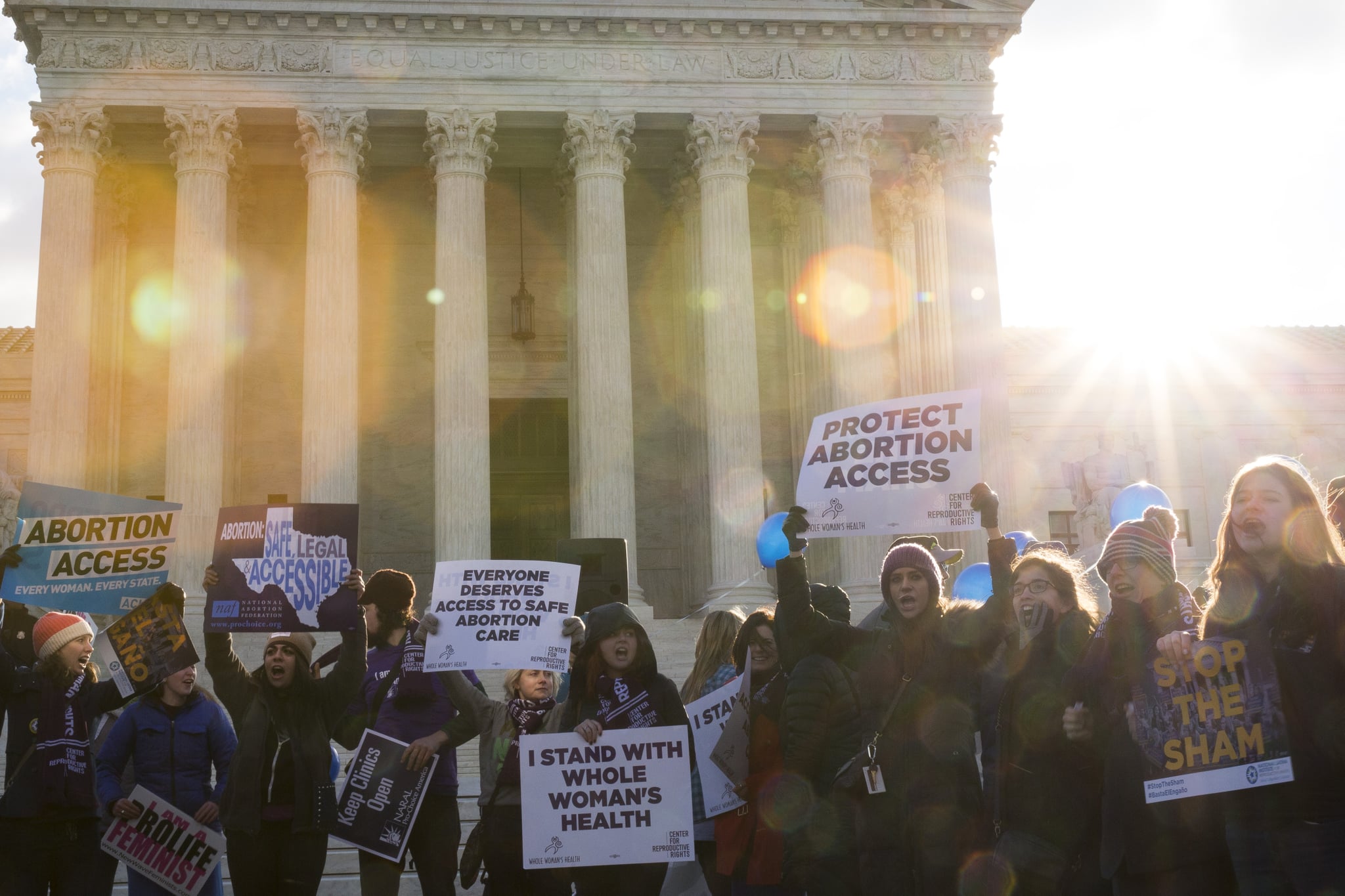 Donald Trump may have been pro-choice before he entered politics, but during his run for president, he made one thing clear: he would be a pro-life leader. In a September 2016 letter to a pro-life groups, Trump laid out four promises. Delivering on them could drastically limit women's reproductive rights. In the letter, the now-president-elect wrote:

I am committed to:

Let's look at each of these promises and what they could mean for abortion and other reproductive rights for American women.

Since Republican senators have denied President Obama the chance to appoint the current vacant Supreme Court seat, on day one Donald Trump will get to nominate a justice. In addition, there are three justices on the court who are over or about 80 years old: Ruth Bader Ginsburg (83), Anthony Kennedy (80), Stephen Breyer (78). Both Ginsburg and Breyer lean liberal, while Kennedy is typically a swing vote on abortion rights. Being realistic, that means Trump could have as many as four appointments during his first term.

If you want to get a sense of who Trump might appoint as a Supreme Court justice, check out who he tapped as his running mate: Indiana Governor Mike Pence. Carol Sanger, author of About Abortion: Terminating Pregnancy in the Twenty-First Century and professor at Columbia Law School, said the choice of Pence should worry pro-choice Americans. She notes: "Pence said during the campaign, 'Go tell your neighbors and your friends [that] for the sake of sanctity of life . . . and all of all our other God-given liberties, we must ensure the next president appointing justices to the Supreme Court is Donald Trump." Sanger describes Pence a "ferocious pro-life politician."

"His appointments are more likely to vote to overturn Roe, particularly if there is no way for Democrats to exert any pressure against such appointments."

As governor, Mike Pence backed one of the more draconian antiabortion laws in recent history. In March, he signed a law requiring women to have a burial or cremation service for their fetus after getting an abortion or miscarrying. The law also made it illegal for women to get an abortion if the fetus has a disability, like Down syndrome. In June, the Indiana law was blocked by a federal judge. As president, though, Trump will also get to appoint federal judges on lower courts. That means judges more friendly to Pence's point of view may start making it onto the bench. Daria Roithmayr, a law professor at the University of Southern California, explained the implications: "At the very least, his appointments to the federal bench (judges at the trial and appeal courts) are likely to permit states to impose burdens on a woman's right to choose at the margins." That includes waiting periods, information disclosure requirements, and hospital infrastructure requirements for clinics. "That's happened already to some extent," Roithmayr said, "but I expect to see more of his judges permit more of those kinds of interference with women's reproductive rights."

During the campaign, Trump did release a list of 21 potential Supreme Court nominees vetted by conservative groups. He also said Roe v. Wade would be overturned "automatically" thanks to his appointments. "His appointments are more likely to vote to overturn Roe, particularly if there is no way for Democrats to exert any pressure against such appointments with such commitments," Roithmayr explained. The Democratic senators in the minority could act as firewall here. They could threaten to filibuster extreme appointments from Trump as a way to influence who is nominated. There will be a lot of political pressure, however, for them to not obstruct Trump's appointments, especially since they criticized Republicans for blocking Obama's. Republicans in competitive seats could also help prevent extreme nominees. Roithmayr said, "Republican Senators might be loathe to confirm someone with such a radical viewpoint, given the fact that women are such an important part of their constituency and the right has been so long-standing. But maybe not."

Another way to take action is to vote for pro-choice candidates in your local state elections.

If you want your senators to at least put pressure on the process, you should contact your senators here and tell them you oppose any Supreme Court nominee who would overturn Roe v. Wade or limit abortion access. Another way to take action is to vote for pro-choice candidates in your local state elections. State legislatures are the ones who write many of the laws that make it to the federal courts and eventually the Supreme Court, so applying pressure at that level can help. And currently, Republicans are governors in two-thirds of US states. Electing more pro-choice governors provides another way to veto restrictive abortion legislation.

This law would require a raped woman to file a police report before obtaining an abortion at 20 weeks.

Trump has promised to sign the Pain-Capable Unborn Child Protection Act into law, and with a Republican House and Senate, he just might. The law would be a virtual national ban on abortions after 20 weeks. There are various reasons a woman might choose to terminate a pregnancy at this stage, like a fetal anomaly or risk to the mother.

According to analysis, this law would require a raped woman to file a police report before obtaining an abortion at 20 weeks, essentially requiring her to get the permission of local law enforcement. The bill is filled with similarly distressing provisions. Likely, the best bet against it making it to Trump's desk would be a Democratic filibuster. Supporting pro-choice Democrats in Congress and vocalizing your opposition to such a bill could help.

Planned Parenthood gets federal funding, which it is not allowed to use to fund abortions. Donald Trump promised pro-life groups that he would go further, essentially blackmailing the group that provides crucial nonabortion reproductive and women's health services (like cancer screenings) to American women. During the campaign, Trump said that so long as Planned Parenthood provides any abortions, he will work to make sure they get zero federal funds, regardless of what those funds are used for.

Republican lawmakers in Washington have made unsuccessful efforts to block funds to Planned Parenthood. Now with control of both houses of Congress, they could actually pass a bill. There is evidence that such a law could get shot down in federal courts, since a federal judge previously blocked an Indiana law that would have barred Medicare users from accessing Planned Parenthood. But again, with Trump nominating federal judges, that protection could waver.

In addition to contacting your lawmakers, you can donate to Planned Parenthood to make sure it has a chance to continue to provide women's health services to the underserved.

Each year, Congress adds the Hyde Amendment to the annual appropriations bill (aka the budget). This prohibits taxpayer funds to be used on abortion services. During the campaign, Hillary Clinton called for the end of the Hyde Amendment, demonstrating her commitment to a woman's right to choose and that she would work to help low-income women access to abortion services, too.

Donald Trump, on the other hand, wants to make it a permanent law, one that does not need to be added to the budget each year. With Republican control of Congress and the White House, it's likely. The House of Representatives already passed something called the No Taxpayer Funding for Abortion and Abortion Insurance Full Disclosure Act. And now the Senate could send it to Trump's desk to sign if Democrats don't successfully filibuster it. Considering the Hyde Amendment often finds bipartisan support, it's unlikely Democrats would use their political capital for this issue, meaning low-income women will continue to have limited access to a medical service currently protected by Roe v. Wade.

According to Sanger, the Supreme Court may still be reluctant to overturn abortion rights, regardless of who Trump appoints. "It helps to remember that Roe, which established that a constitutional right to privacy included a pregnant woman's right to choose an abortion, was decided in 1973 and reaffirmed — rather than overturned — 20 years later in Planned Parenthood of Southeast Pennsylvania v. Casey." She continued, "Although three justices in Casey said they might not have voted for the right to abortion had they been on the Court in 1973, by 1992, the right had become embedded in how many Americans were able to think about their futures — jobs, relationships, and so on — by virtue of being able to rely on the right to an abortion. That logic would seem to hold even stronger now that 25 more years have gone by." Let's hope so.