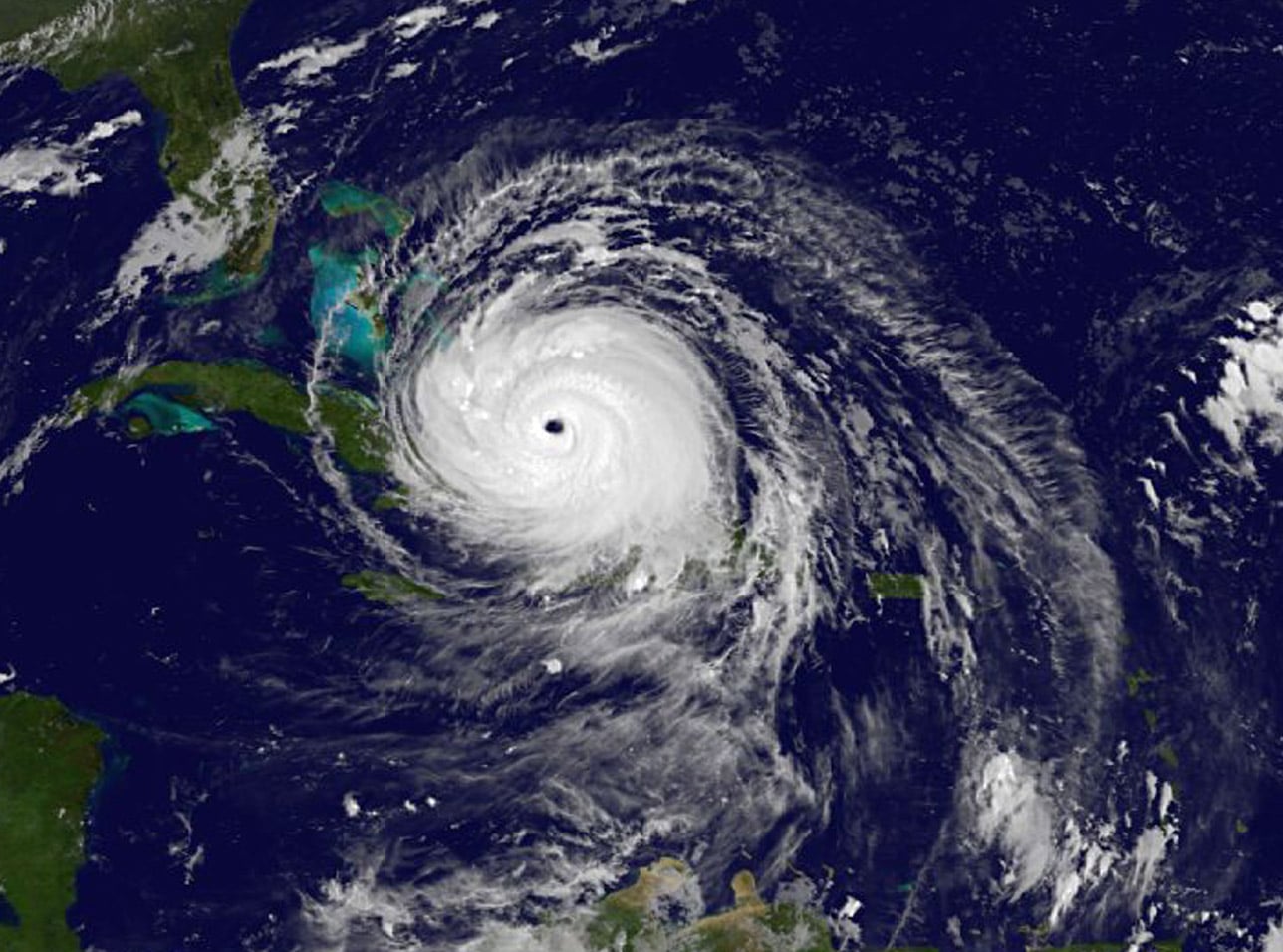 Hurricane Irma made landfall at 9:10 a.m. in the lower Florida Keys as a Category 4 storm. Bringing sustained winds of 130 miles per hour and a storm surge as high as 15 feet, Irma is being compared to the worst hurricane ever to hit the Florida Keys: Donna, which made landfall exactly 57 years ago today. Here's the latest: 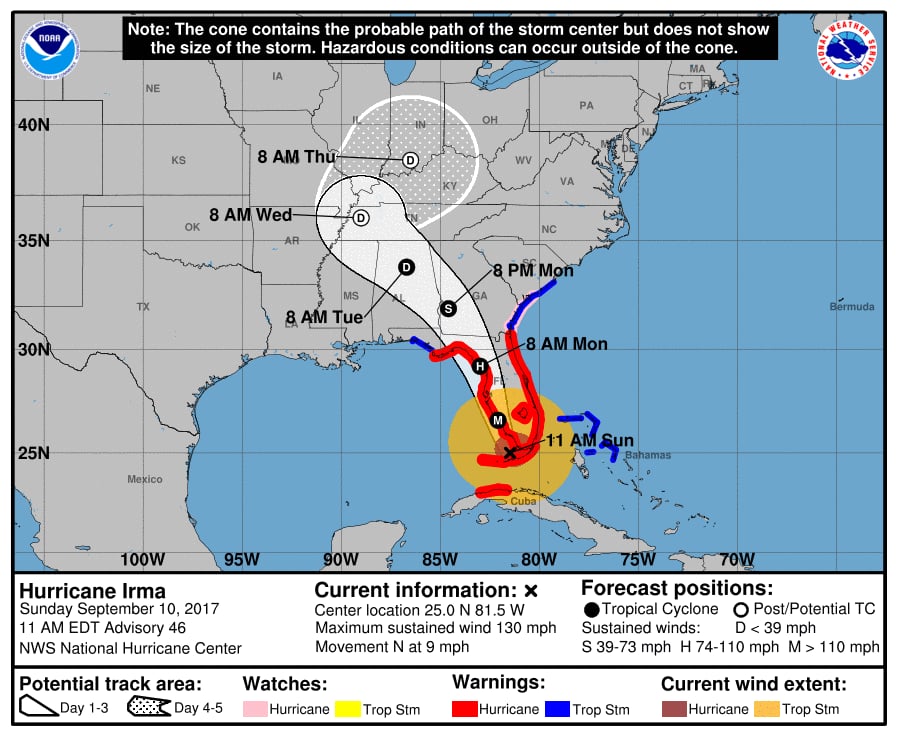 🚨 Our officers are now sheltered for their safety. We cannot respond to calls for service. Stay indoors, DO NOT venture out! #HurricaneIrma pic.twitter.com/rHIjNzYyan

"We just hope that everybody is inside and in a safe shelter," says Miami Beach @MayorLevine; city has an 8p curfew https://t.co/4QFKYxVxDd pic.twitter.com/3IgAcFSVTi 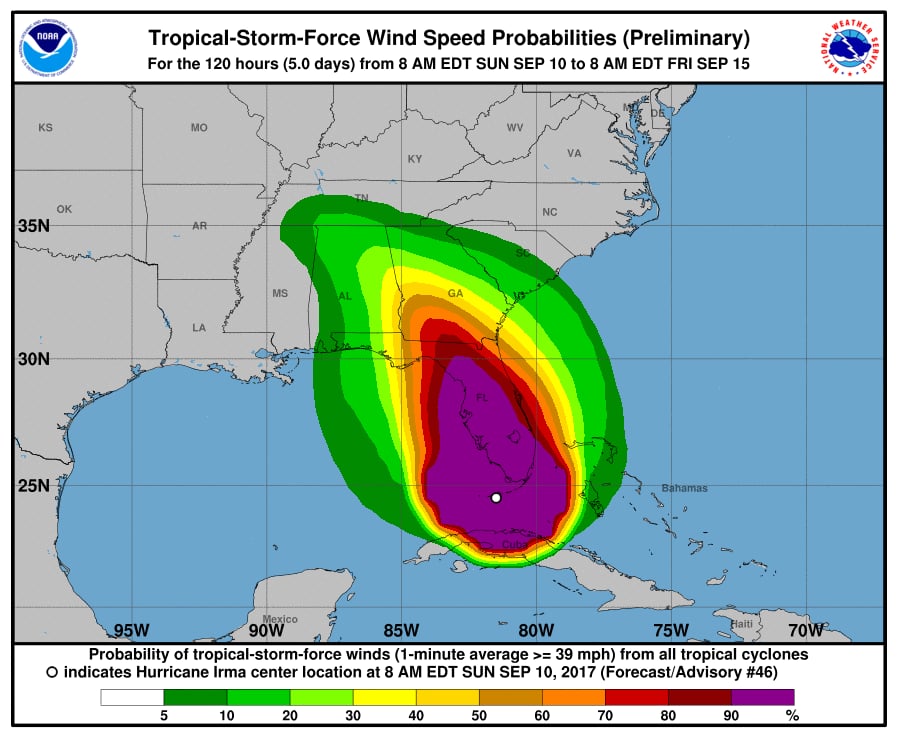 Irma continues to barrel toward the United States, and while it has now been downgraded to a Category 3 hurricane after making landfall in Cuba last night as a Category 5, it's expected to once again swing upward to a Category 4, making it one of the most powerful hurricanes to slam South Florida in a very, very long time. Here's the latest: 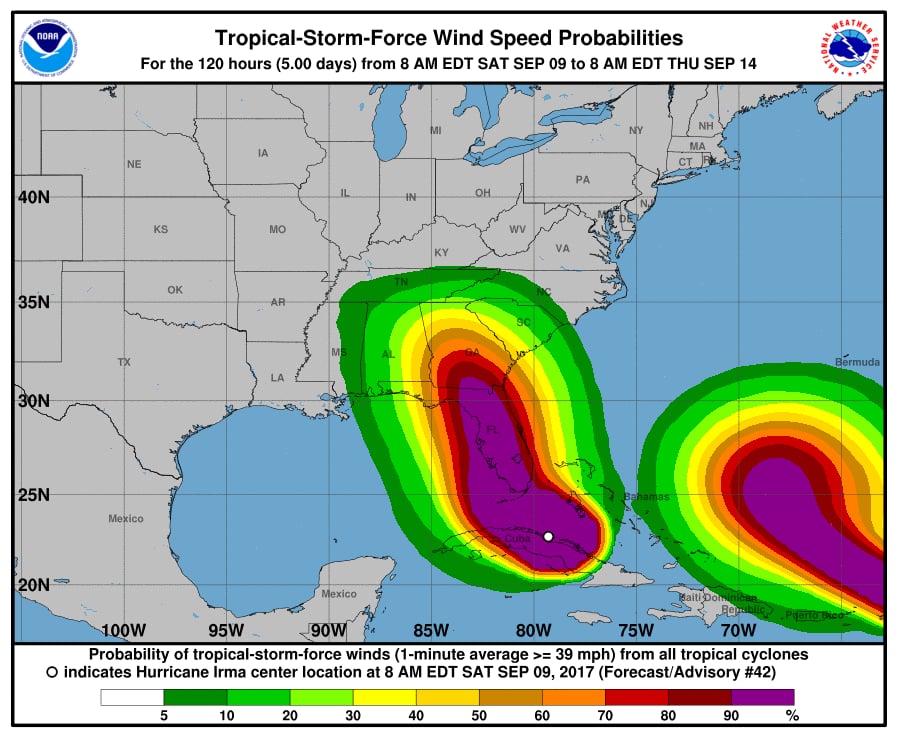 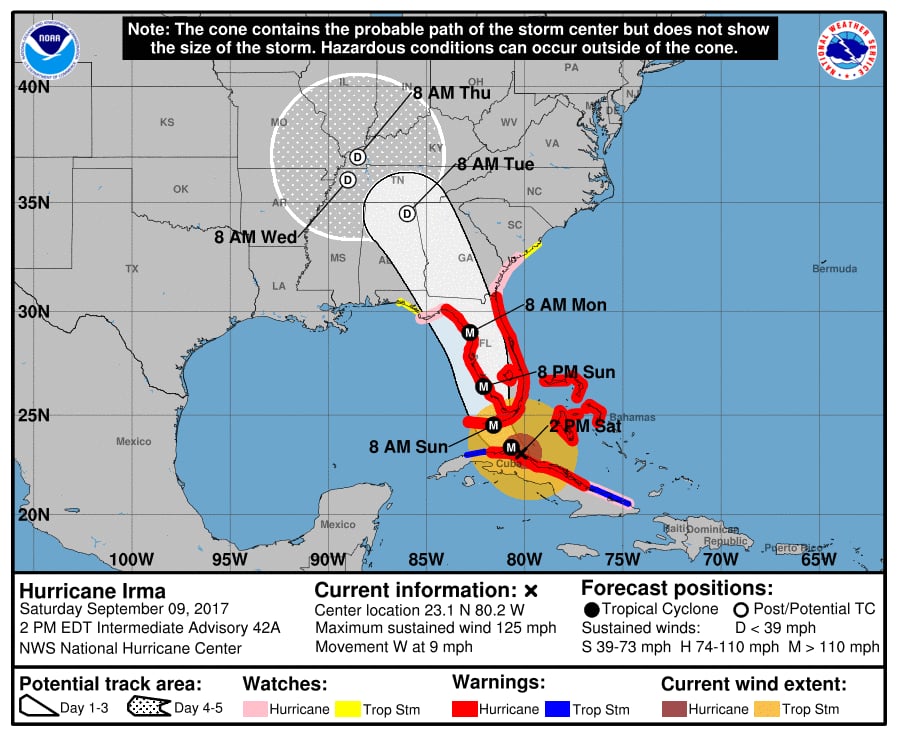 Despite being downgraded to Category 4, Irma is set to be the strongest hurricane to hit Florida in more than 13 years and will make landfall in South Florida this weekend. Governor Rick Scott is warning Floridians that Irma is "way bigger than Andrew" — one of the most devastating hurricanes in Florida's history — and here's what else we can confirm as of Friday afternoon: 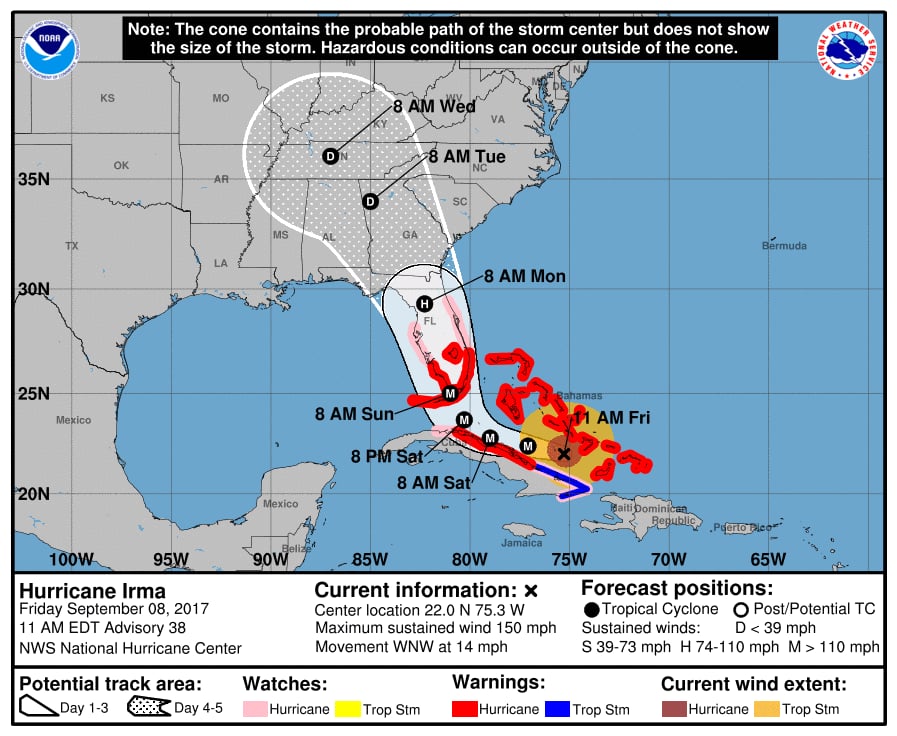 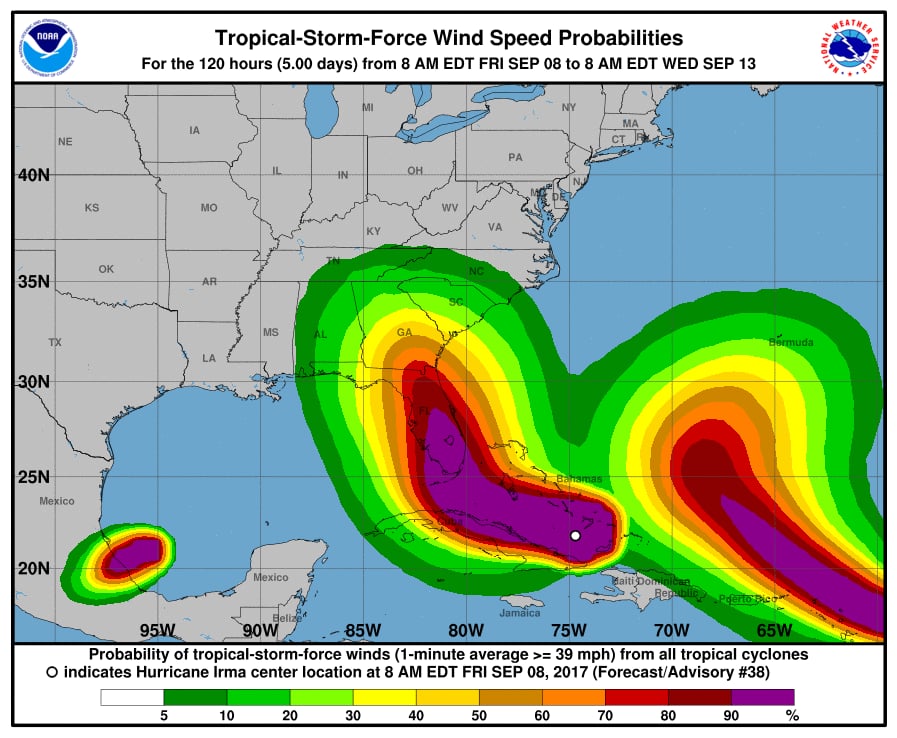 .@FLGovScott: "This storm is wider than an entire state & is expected to have a major impact from coast to coast" https://t.co/0lDZOUB21W

At least 10 people have died and the tiny island of Barbuda has been demolished since Irma made landfall, and the Category 5 hurricane has yet to show a single sign that it is slowing down. Here's what we can confirm at this stage: 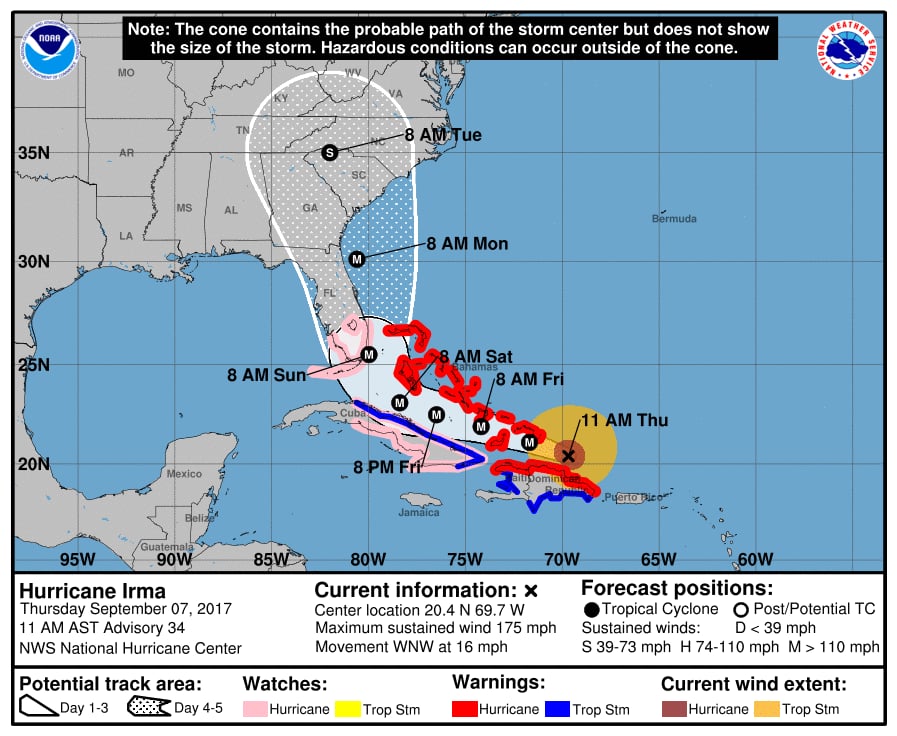 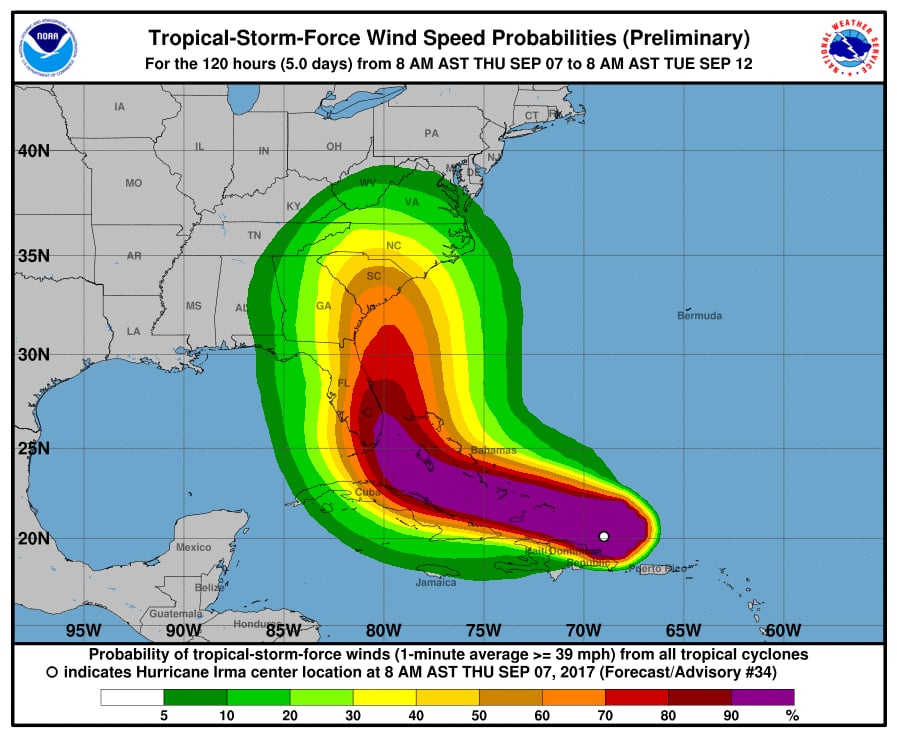 Hurricane Irma made landfall on the island of Barbuda during the early hours of Sept. 6. Here's what we can confirm at this stage: 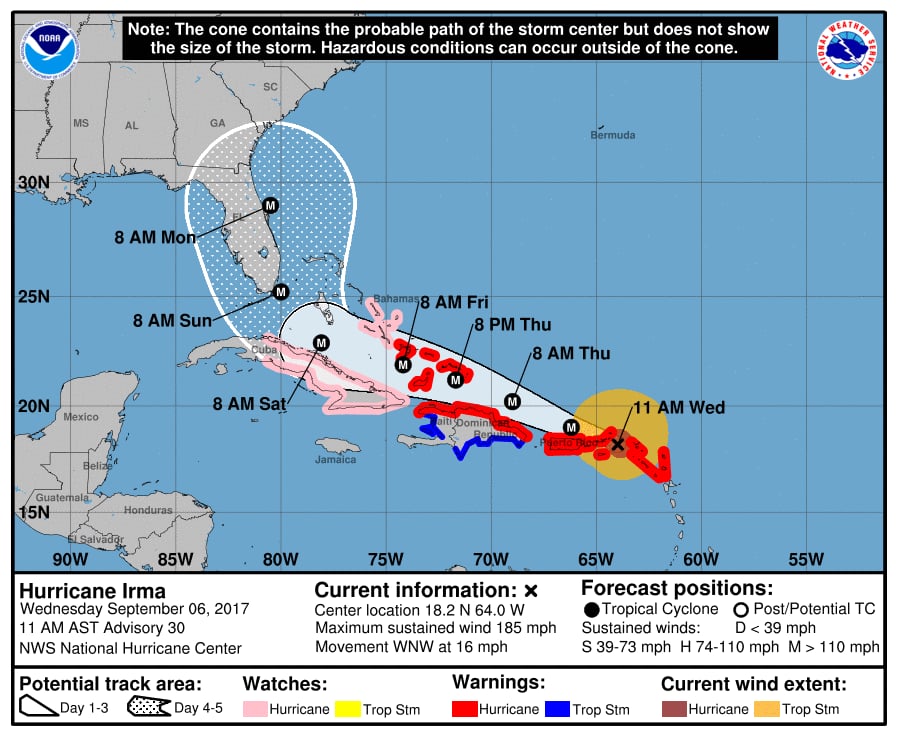 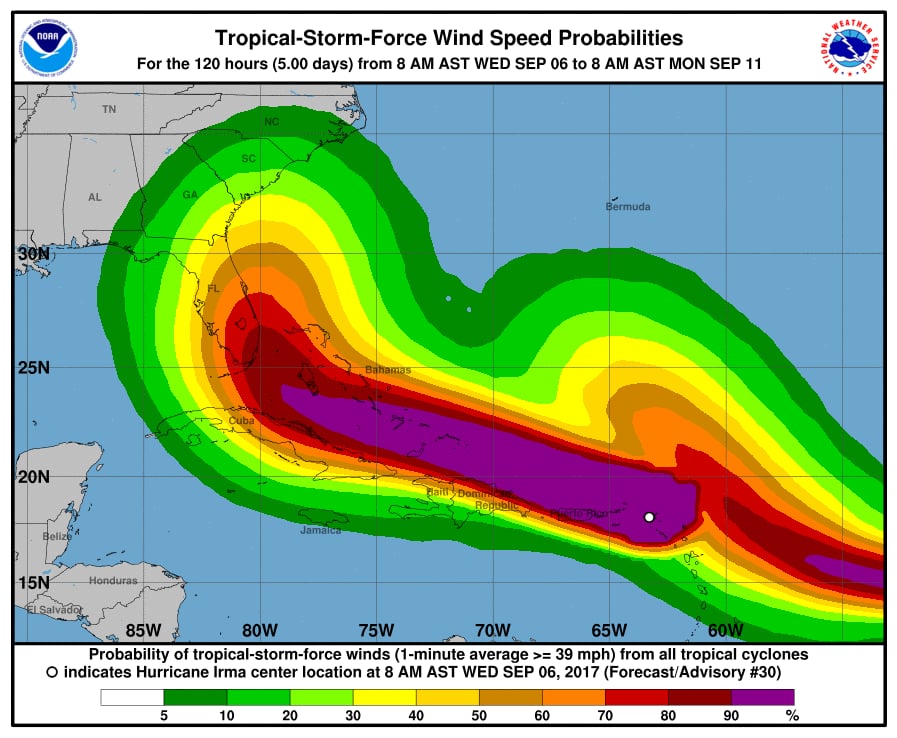 Less than 24 hours after being designated a Category 4 hurricane, Monday morning Irma was once again upgraded to a Category 5. Here's the latest: 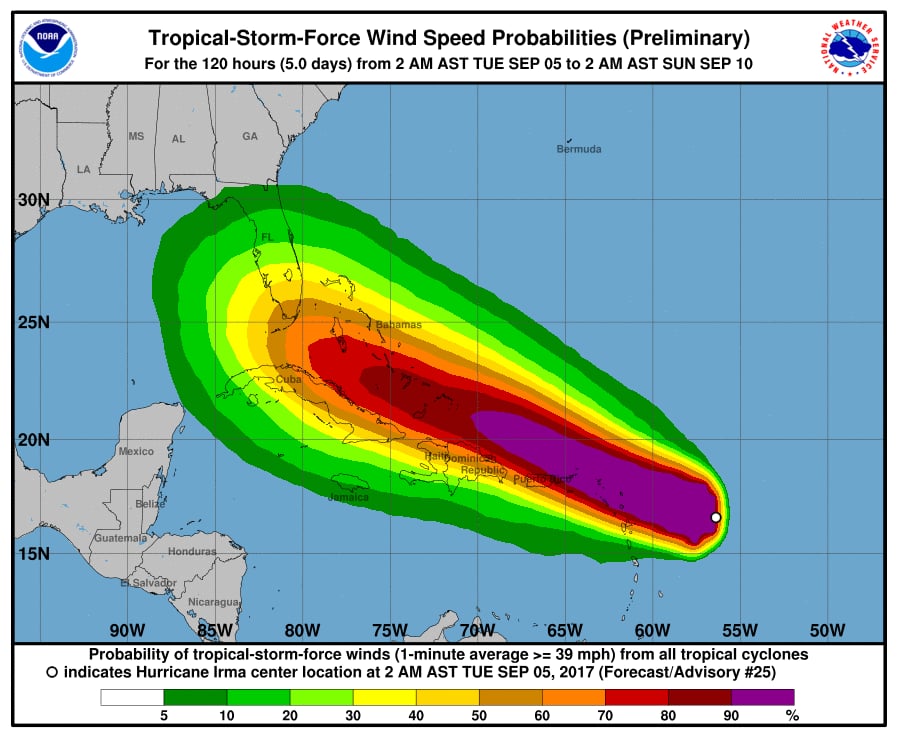 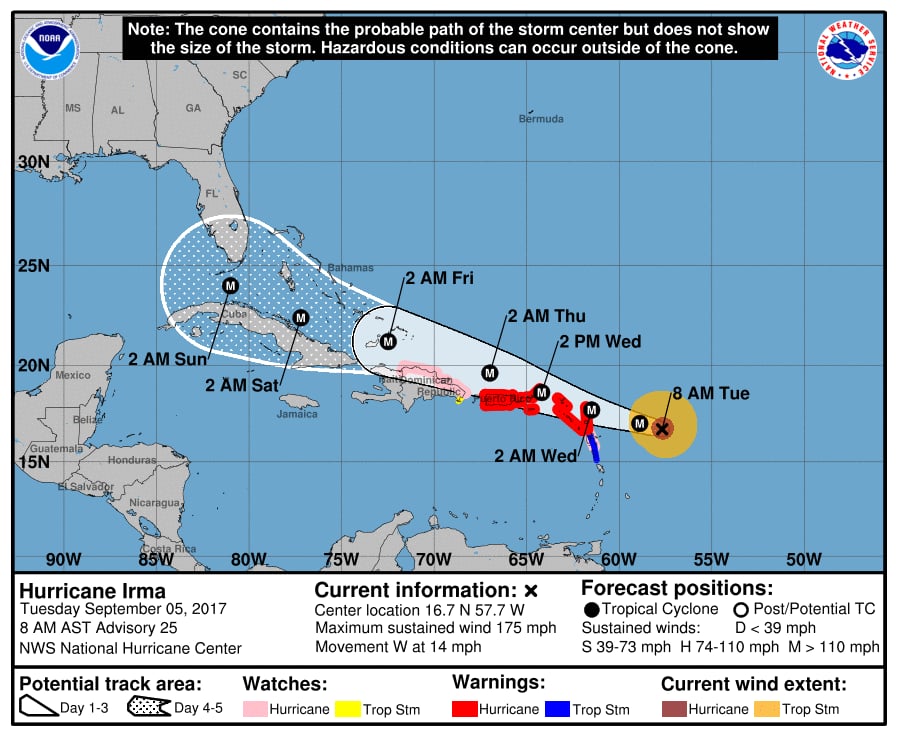 As the residents of Texas deal with the aftermath of Hurricane Harvey, Hurricane Irma continues to barrel toward American shores. Currently clocking in as a Category 4 storm, the final trajectory has yet to be wholly mapped out, but it is becoming increasingly likely that Irma will make landfall on the Southern Coast, and the storm will almost certainly have an impact on the Florida coast. Here, however, is what we can confirm at this stage: 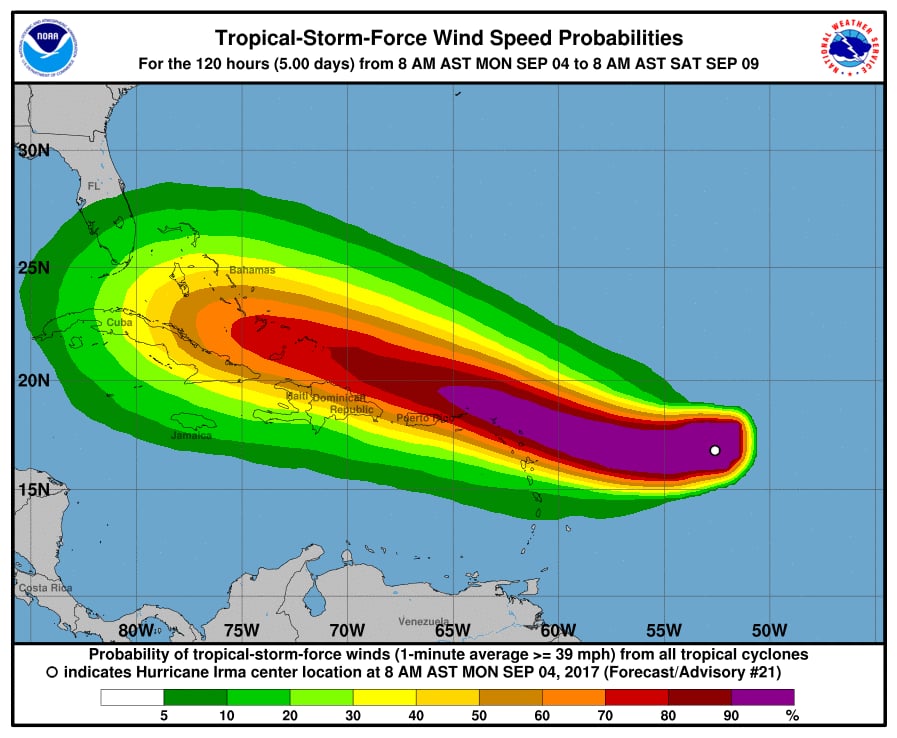 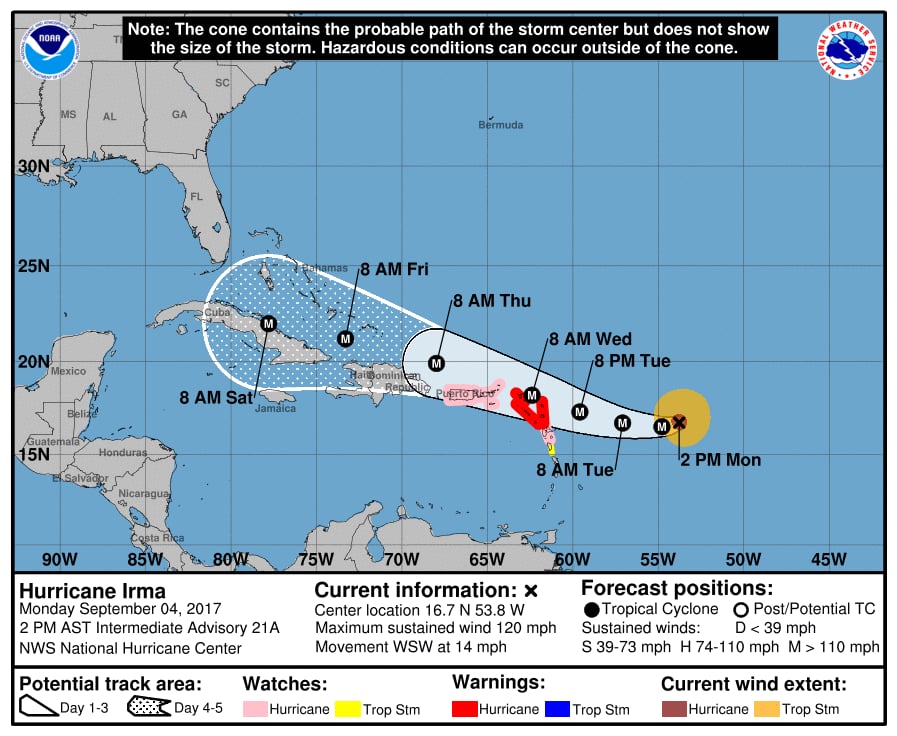 Less than a week after Hurricane Harvey — and before the devastating storm has even fully cleared out of the continental United States — another massive tropical storm brewing in the Atlantic, Irma, has been upgraded to a hurricane. And Hurricane Irma might be headed our way. While meteorologists are predicting that the storm is at the very least a week away from landfall, hurricane expert Dan Kottlowski told Accuweather that "Irma is likely to become a major hurricane and could become a Category 4 well before it reaches the Lesser Anteilles." We'll continue to monitor developments as and when they happen and update this story, but here's what we know right now: 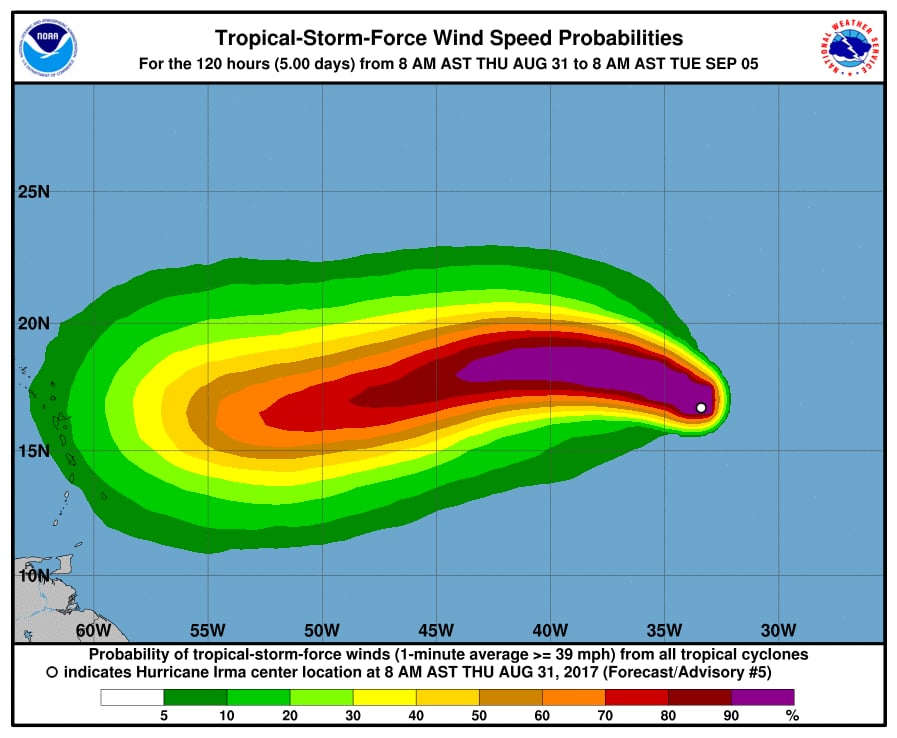 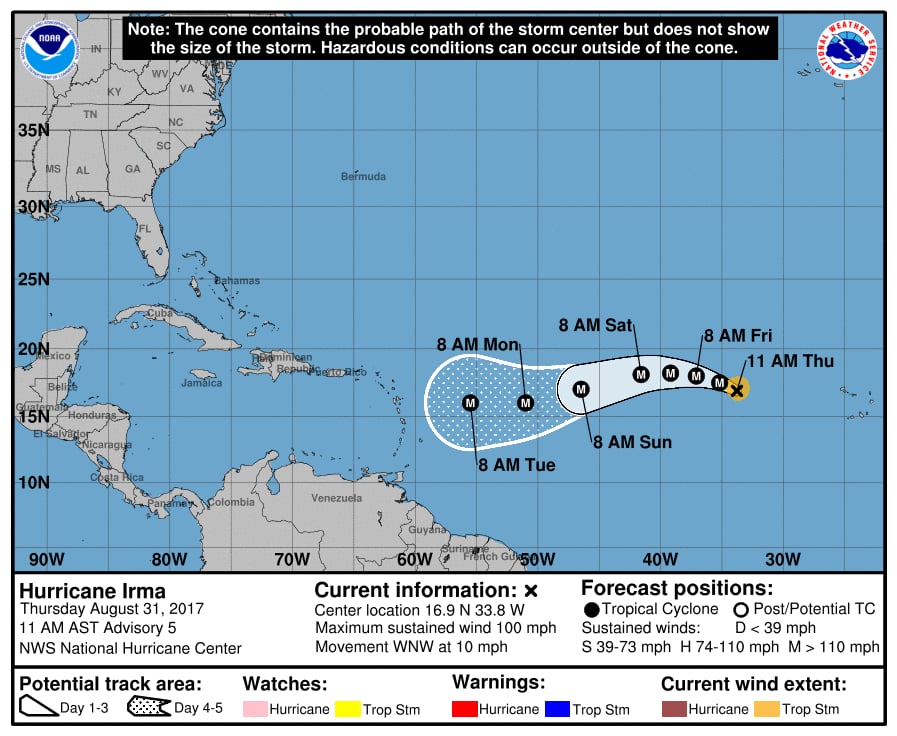 This is a developing story and will be updated as new information becomes available.