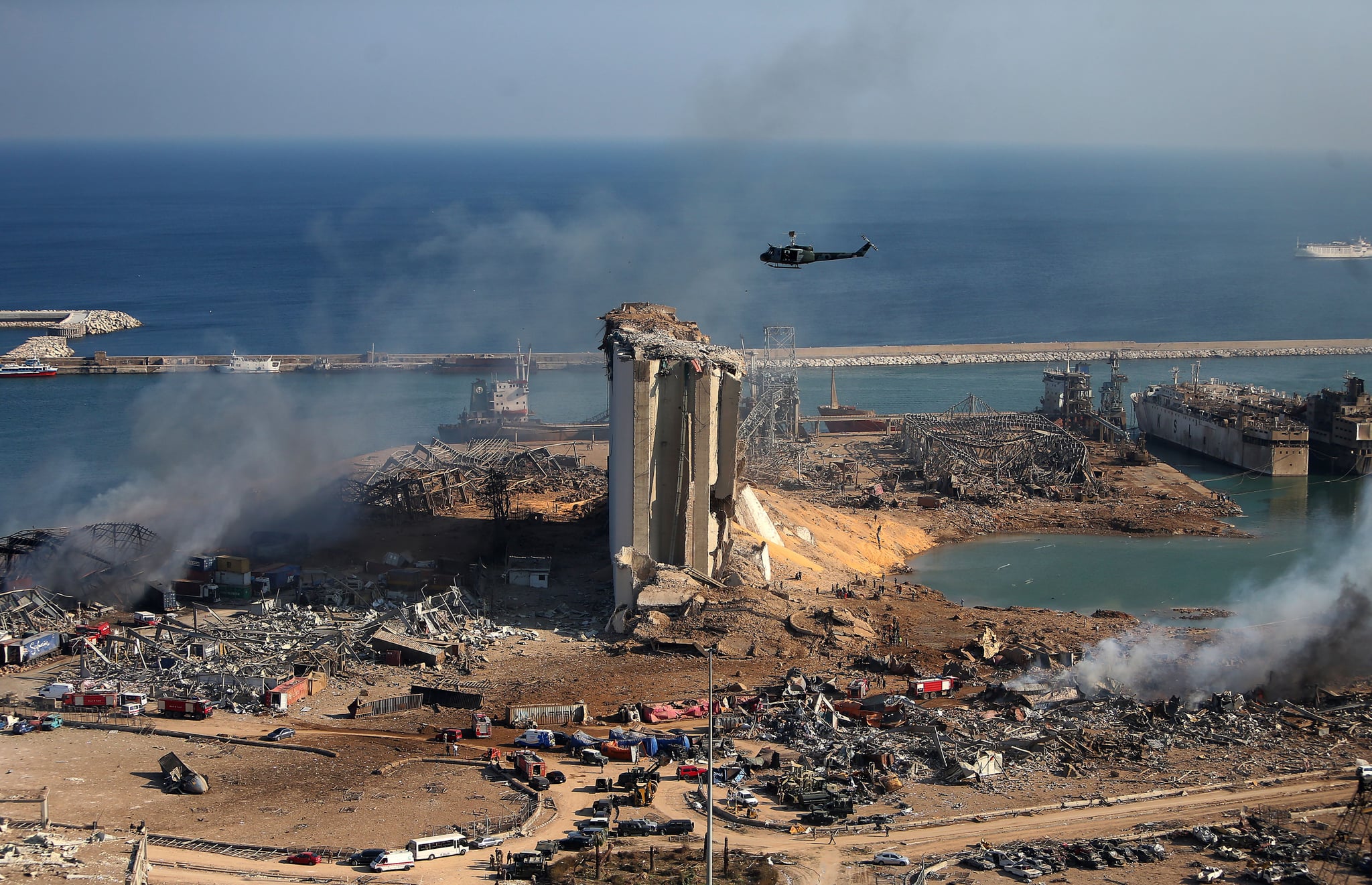 Thousands of people were injured and more than 135 were killed in Beirut on Aug. 4 after a major explosion in the city's port warehouse sent shockwaves through the Lebanese capital city. According to bystander footage and photos shared across social media, the blast — which could be felt over 150 miles away — created a mushroom cloud of pink smoke in the sky before rippling through the city and causing widespread devastation, even as far as the outskirts of Beirut. Windows were broken, buildings were flattened, cars were flipped, and many people were hit by large flying debris.

In addition to those killed and injured, more than 300,000 people have been displaced from their homes in the aftermath of the blast. As a result of so many thousands being injured, Lebanese hospitals — which were already overwhelmed with coronavirus patients — are desperately in need of blood donations and resources to help victims in need of immediate medical attention.

Officials have linked the cause of the explosion to around 2,750 tons of confiscated ammonium nitrate — which is often used in creating bombs or in agriculture as a high-nitrogen fertilizer — that were being stored in Hangar 12 at the port since Sept. 2013 without proper safety measures in place. Public records and documents show that senior Lebanese officials were aware of the potential dangers associated with storing such a large quantity of the chemical compound in one location, and an investigation committee has been tasked with announcing who was responsible for the disaster within five days. Ahead, read about ways you can help provide relief for Lebanese citizens during this crisis.

In addition to the calamitous effects of the explosion, Lebanon is in the midst of a severe economic crisis exacerbated by the collapse of the country's currency by 80 percent since October, according to The Washington Post. As of 2019, it's estimated that 48 percent of Lebanese citizens live below the poverty line and the price of food has increased by 56 percent since 2019, pushing the country towards famine and leaving more than half of citizens to rely on food banks. Furthermore, Lebanon is facing deep political unrest as a result of the government's ineffective handling of these crises, making the effects of the recent explosion even more destructive. By staying up-to-date on the political and civil unrest in Lebanon, you can better assess what organizations and groups of people are in need of your support and provide direct support to those most affected by the ongoing catastrophes.

Donate to the Lebanese Red Cross

Lebanese Red Cross teams are on site performing search and rescue missions, as well as treating those who are injured, while triage and first aid stations have been set up across the Beirut port. Additionally, more than 75 ambulances have been dispatched to provide aid and transport the wounded to hospitals. If you download the Lebanese Red Cross app, you can donate directly to Beirut ambulance services and provide financial support for those desperately in need of medical aid.

Donate to Disaster Relief For Victims of the Explosion

Numerous charities and organizations have banded together to help those in need in Beirut. By contributing to groups such as the Beirut Disaster Relief Crowd Fund, UN Global Compact, and the Lebanon Needs organization, you can help provide relief for those who lost their homes, their family members, and their health to the explosion. You can also contribute to giving Lebanese students a better education and providing food for those in need by donating to crowdfunding efforts for kids and the elderly, the Lebanese Educators project, Catholic Relief Services and the Lebanese Food Bank. Additional places to donate include the Norwegian Red Cross's Facebook fundraiser for victims of the explosion and Karmagawa's Facebook fundraiser. Read up on more local Lebanese organization to support here.

Amplify the Voices of Those Fighting For Change

Peaceful groups such as the Coalition to Defend Freedom of Expression in Lebanon are continuously met with laws that suppress their freedom of speech, which is why it is crucial to amplify the voices of those whose voices deserve to be heard. By sharing updates about the ongoing crises in Lebanon, you can help to uplift the voices of those who are fighting to make their home country feel safe again. To report lost victims of the explosion, you can also visit @locatevictimsbeirut on Instagram.

Support Protesters Who Have Been Rallying For Better Economic Conditions

For decades, violent protests have contributed to growing political uprising in Lebanon as a result of the government's ineffective management of the crises that have been plaguing Lebanon since 1975, when the country underwent a civil war. For many who have urged the government to take action and been ignored, support from other countries and those whose voices have not been stifled is invaluable. You can donate to London 4 Lebanon's crowdfunding efforts to campaign for the institution of nine initiatives that cover the most pressing needs in Lebanon, which include food, hunger, lack of shelter, and poor healthcare.