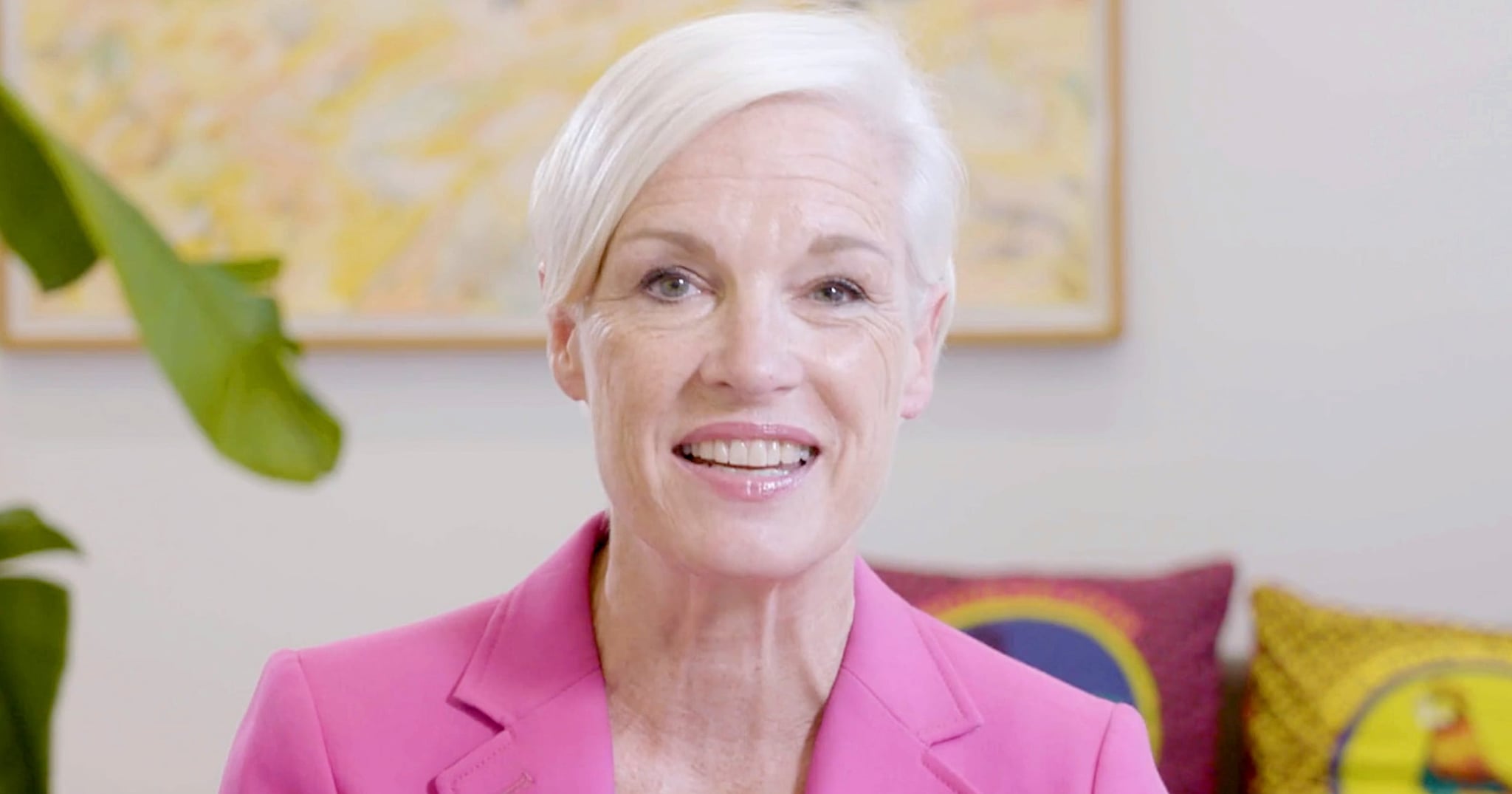 Cecile Richards, the former head of Planned Parenthood and daughter of trailblazing Texas Governor Ann Richards, is a legend in women's activism. We caught up with the cofounder of Supermajority to talk about her Election Day routine, why women are poised to be so powerful this election year, and her advice for quelling election anxiety.

POPSUGAR: It's about 11 a.m. where I am on Election Day and 2 p.m. where you are. What's your final message to anyone who hasn't yet voted?
Cecile Richards: If you care about the future of your country, if you care about your own future — your family, your kids, your parents — then go vote. This is the one time we have every four years to really send a signal about what we expect from our government. There's probably never been a more important election in my lifetime.

PS: I think people would be curious to have a window into how you're spending Election Day. Can you give us a rundown of Cecile's Election Day schedule?
CR: I would love to say that I have some pattern, but of course, on a usual Election Day, I'd be out at the polls. We would be checking our polling places, seeing if signs are up, [if] people have what they need. This isn't like any election I've ever had, because here we are on Zoom. I got up this morning, went for a great walk in the park with my dog — which, honestly, if anyone gets the number-one blue ribbon for getting me through the pandemic and the last four years, it's my dog Ollie. It's been a day where you're thinking about all the people who have been on this journey with you, so I've been calling people I worked with on Hillary Clinton's campaign. People who started Supermajority when we started it together. We just had an all-staff call where we all just got to celebrate the extraordinary things everyone has done, because who knows what's going to happen tonight. But just taking a beat and take joy in what we've built and the work that women have done but are going to do. Tonight, fortunately, my daughter's here. We spent the last election night together, and we're going to spend this one together, too. We'll do a family-wide, nationwide Zoom call, and with my daughter in Africa who's just as anxious as we are about the returns.

"I always like to think about Mom and remember her and all of our ancestors, these women who fought for our rights, and how much we owe them a debt of gratitude."

PS: What will you be doing tonight? Do you have any self-care rituals or comfort foods on your schedule for later?
CR: It's funny, people I know have all been texting each other about what they're going to eat. Some people stress eat, I stress not eat. If I had invested in LaCroix early in the pandemic, I could retire. LaCroix is kind of my jam right now, but I think we are going to order out tonight because none of us feel like getting in the kitchen and cooking. The only other thing I do, my mom was really important in my life and she passed away several years ago, and so every election, I post something about her. My daughter found a picture of my mother going to vote and putting her ballot into this little wooden box. It was so antiquated, like something out of the 1800s. But I always like to think about Mom and remember her and all of our ancestors, these women who fought for our rights, and how much we owe them a debt of gratitude.

PS: Supermajority is all about bringing together women of different backgrounds, races, and ages. What invigorates you about the power women do hold in this election cycle?
CR: Well, of course the exciting thing has been that women have been, for the last several years, just been this undeniable force in this country, standing up on so many important issues: racial justice, family separation, access to healthcare, dealing with the pandemic, and now we have the chance to also be not just a supermajority of leaders, but a supermajority of voters. Women right now are making records all across the country. In several states, women are 55, 56 percent of the voters already. So I think we're due to hit all kinds of new numbers, and that's exciting. When women come together across race and across generation and across issue, even, we really can build the kind of country we believe all people deserve to live in. The one thing, too, I want to make sure that if anyone's listening today: there are many states where you can still register to vote on Election Day. I think some women might think, oh my gosh, I forgot to do that, or we moved — you should definitely look it up, because you may still be eligible to vote and not even know it.

PS: I've been volunteering with Supermajority this election season, and I think getting together with other women and seeing the power you have to reach thousands of people in even just a single hour is so inspiring. I'm wondering, for you, what's been an experience that's really stuck with you — or newly inspired or galvanized you — this year?
CR: Actually, it just happened the other day. I was phonebanking last Friday into Michigan, and I talked to a woman on the phone who is 94 years old. She's disabled, so she was saying that it was going to be really hard for her to get her walker and get to the polls, but she wanted to vote and she had her absentee ballot. And I said, "Well, you know, in Michigan, if you aren't able to get to the polls, the clerk will come pick it up." And just because we happened to be on the phone together, we got someone to come and pick up her ballot and she cast her ballot. And so as you say, sometimes you think, what difference can any one person make? And it's true: Cecile Richards phoning Ms. Washington in Michigan, that's not going to be it. But the whole idea behind Supermajority is if everybody is just doing a little bit more, and if every single one of our volunteers got just five more women to vote — and it's not just Supermajority, there are so many women's organizations really helping people make sure they're registered and make sure they vote — then you can move mountains. And that was inspiring to me, and I've been organizing my whole life, but there's nothing quite like that human connection where you go, "OK. This was 100 percent worth getting on the phone today."

PS: As someone who has been in the reproductive-rights fight for decades, how have you seen the landscape change? This has been such a pivotal year — people were really impacted by Ruth Bader Ginsburg's passing and scared by Amy Coney Barrett's nomination to the court. Where does your biggest concern lie when it comes to abortion access, and even access to free birth control?
CR: Right — the free birth-control coverage is something really important to remember, because we never had that before the Affordable Care Act. That was a revolutionary change, and I know probably a lot of young women don't realize that. Look, the threat is real. I think for many years, people relied on the judicial system and the courts to protect our rights, and even though this country is very much in favor of pregnant people being able to make their own decisions about their pregnancy — that's just a given — we can't be assured that the judicial system is going to protect that right. So, right now, we're going to need legislation through Congress, at the state level, and that to me is why it's so important that everyone participate in voting. And then of course after voting, making sure your officials take the steps they need to ensure your rights and access to healthcare writ large. Another thing that is really wild to even think about: [before] the Affordable Care Act, women paid more for health insurance than men, because it was legal for the insurance companies to charge us more, mainly because we reproduce. That was outlawed under the Affordable Care Act. There's so many things we've had to fight for, and we certainly can't rely on the Supreme Court to do the work for us. It's why I think it's so exciting to see so many women engage, so many more women running for office, women of color going to Congress. Women are on the move.

PS: How do you quell your anxiety and doubt and keep pushing forward? I know there's no secret formula to staying hopeful or staying in the fight, but is there anything as someone who does this full time you can offer women who are feeling particularly anxious or having trouble mustering hope?
CR: I have two thoughts. One is, today, turn off the television. Quit listening to the news, because they don't know anything. Everyone's just trying to fill up space right now. And if you've got time and energy, go get on a phone bank and go call women voters, because there are millions more that still need to vote, and you can still do that. We're phone banking until 9 p.m. tonight, so folks can go to Supermajority.com and sign up to phone bank, and it will make you feel better. You'll actually be doing something constructive. Of course, we don't know what's going to happen. We've done great work collectively, and women of color have really just led in this moment. But we're trying to dismantle a system that has been run by a certain group of people forever, and that is not easy. As Gloria Steinem says, people don't give up power without a fight. So I've been thinking a lot about that; that this country's becoming more diverse, women are becoming not only part of the voting population, but half of the workforce. We're now almost 40 percent of the Democratic caucus to Congress. And that change is exciting, and it's threatening to some people. The future is on our side, and we've gotta keep that hope alive. No matter what happens tonight.

Award Season
Jazmine Sullivan Urges Men to Rally For Abortion Rights at the BET Awards: "Stand Up"
by Kelsey Garcia 4 hours ago

Rita Moreno
Rita Moreno Reflects on Her Botched Abortion in Wake of Roe v. Wade Being Overturned
by Sabienna Bowman 9 hours ago