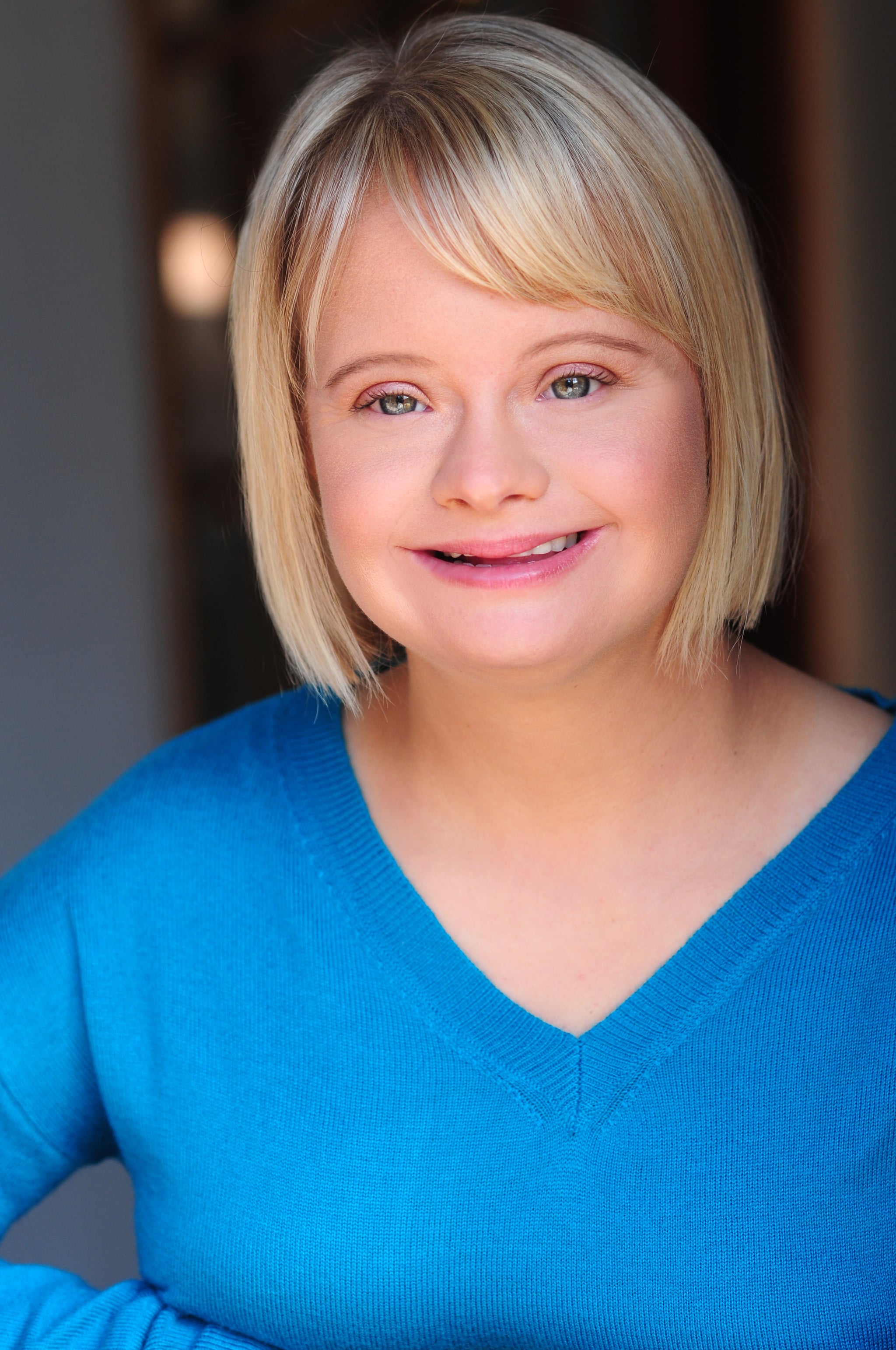 Lauren Potter grew up with one big dream: to become a successful actress in Hollywood. As a child with Down syndrome, she faced a lot of challenges on her way to the top, mainly people telling her she wouldn't make it. Her reaction? To just keep going. "I only listened to the people who told me I could," she told POPSUGAR when we recently chatted with her about Disability Employment Awareness Month, which is this October. "Don't ever give up your dreams, no matter how hard it is or how impossible it seems."

And Lauren was great at taking her own advice. In 2009, she landed the role of a lifetime when she was cast as cheerleader Becky Jackson on the hit show Glee, which she continued to star in until the series ended in 2015. Since then, the 28-year-old has also guest starred on shows like Veep and Switched at Birth, in addition to touring the country and giving motivational speeches at conferences across the US.

While she's searching for her next big role right now, she continues to do her part to raise awareness for people with disabilities — or "differently-abled" people — not only in Hollywood, but in every workforce. "Everyone I know with DS works hard and gives 100 percent of themselves," she told POPSUGAR. "We're all more alike than different!" To see what else she had to say about her impressive career path, her all-time favorite costar, and the best career advice she's ever gotten (hint: it came from Glee's Jane Lynch!), keep reading.

POPSUGAR: Growing up, how did you handle people telling you that you wouldn't be able to have the dream career you wanted?

PS: Did you always know you wanted to be an actress? How did you go about making your dreams come true?

LP: Yes, absolutely. I performed all the Disney movies for my family and friends, and I also knew all the Disney songs and dances. I don't sing well, but I love to sing a lot! I just knew I wanted to act. I started dance classes when I was 3 and just loved performing. I knew then that acting was the career for me.

PS: What's one obstacle you've overcome in your career that you're really proud of?

LP: I'm really proud that I have Down syndrome and have been able to grow as an actor and show the world that Down syndrome doesn't stop me, and that I think I've become a really good actor. And I think I have some part in opening the doors for other actors with disabilities.

PS: What's something you still struggle with?

LP: I sometimes struggle to overcome life's challenges to become who I want to be. I just want to be accepted for who I am, and to be like everyone else. I want people to know who I really am and who I will truly be. I'm working hard on becoming the best I can be. Right now, I struggle with getting back to work and having someone recognize what I've accomplished and giving me another chance in a great role.

PS: Was there ever a moment you thought you couldn't do it? If so, how did you push through that?

LP: I guess so, but I have a lot of people around me who tell me to get off my butt and try harder. I think I used to feel that way when I was younger, but I've grown up a lot and have learned to push through. I sometimes get discouraged when I have an audition and I don't get the part, but I know I just have to keep trying!

PS: What advice do you have for someone else with a disability who wants to have a career and follow their dreams?

LP: Well, don't ever give up your dreams, no matter how hard it is or how impossible it seems! I want all people with or without disabilities to follow their hearts, follow their paths, and never give up their dreams. I hope I am proof that it can happen!

PS: What advice would you give to your younger self who was just starting out in her career?

LP: I would tell myself not to be afraid or scared or nervous around others, and to always be my very best self. I think I was a little difficult when I was younger, and I wouldn't be like that again.

PS: What do you want employers to know about people with Down syndrome applying for jobs?

LP: Employers should know that they will not go wrong hiring a person with Down syndrome. Not only will they be helping someone reach their goal of working, but they and other employees will learn so much about acceptance and love. Everyone I know with DS works hard and gives 100 percent of themselves. We're all more alike than different!

PS: What are some misconceptions about people with disabilities in any type of workforce?

LP: I don't really know, but I guess maybe they think we can't do the job, or that it will take too much time to help us learn, but that just isn't true. When I was on Glee, I always knew my lines and everyone else's, too! I never held up filming because I wasn't ready. I worked very hard and was always on time.

PS: What's your favorite part about your job?

LP: I love being part of a cast and crew on set. I love acting, and even learning my lines. And of course, craft service isn't too bad either!

LP: I love any kinds of acting roles. I'm really good at comedy, but I would also really like to do a dramatic role, but really I love everything. My dream role would be one that wasn't just for someone with Down syndrome, but a really good, strong role for a young woman who is just a good actor.

LP: Jane Lynch who played Sue Sylvester on Glee once told me in the very beginning of filming when I was still scared: "I know you're new to this, but everything is OK. I'll be here if you want me to help you go over your lines, or just be your friend. You will be awesome." She was always there for me and helped me grow as an actor.

PS: You've had some really awesome roles in your career so far! What's been your favorite and why?

LP: Of course, I would have to say Becky on Glee. That was so fun and in the six years I was on the show, they let me do some really fun things. There were some scary and dramatic things, too, like when Becky brought a gun to school. But also some really fun ones, like "The Rocky Horror Glee Show" episode, being Lady Gaga and Max the dog from Dr. Seuss' The Grinch, the secret service for Sue, and of course, Helen Mirren doing my voice over (are you kidding me!!!). It was so much fun, and I loved the cast and crew and Ryan, Ian, Brad, and Dante. I didn't want it to ever end!

PS: Who is your favorite actor/actress you've ever worked with? Why?

LP: I love, love, love Jane Lynch. She's so awesome and was always there for me. One of my favorite actors is John Stamos because he's so cute and hot and I LOVED him on Full House and Fuller House. When we worked together on Glee, they called me "Mrs. Stamos" on set because I had a huge crush on him, which was so funny.

PS: What's your advice for how directors/producers/casting directors can make the entertainment industry more diverse and inclusive?

LP: I always say, think outside of the box (my mom taught me that) and give us a chance. You will not be disappointed. I want to be seen as an actress first, then as a really good actress who happens to have Down syndrome. But just because you have DS or some other different ability, that doesn't make you a good actor, you have to work hard and prove you can do it. I just want to be seen as the best actor for the role because I've shown I have what it takes.

PS: Have you seen any changes over the years in how inclusive the entertainment industry has become for people with disabilities?

LP: That's a hard question for me, but I think shows like Glee have made a difference. I still think we need to have more chances, though, and there is still a lot of work to do.

LP: I think people think that we are different with different feelings, but we are WAY more alike than different. I want what everyone wants: to be accepted for me, to have friends, to love someone, and have someone love me, to live independently, to work at my career, to have family and friends around me, and to enjoy living my life.

PS: Who are your biggest role models? Why?

LP: My biggest role model is my mom because she's my number one fan. She's been an awesome and amazing mom, and she's my true friend and my true inspiration.

PS: What projects are you working on now?

LP: I've had a couple of auditions, which sadly I didn't get the roles, but right now I'm waiting for more work. I'm still speaking around the country to tell my story and fight against bullying. I'm waiting for that next great role, and I hope it's coming soon, because I'm SO ready!