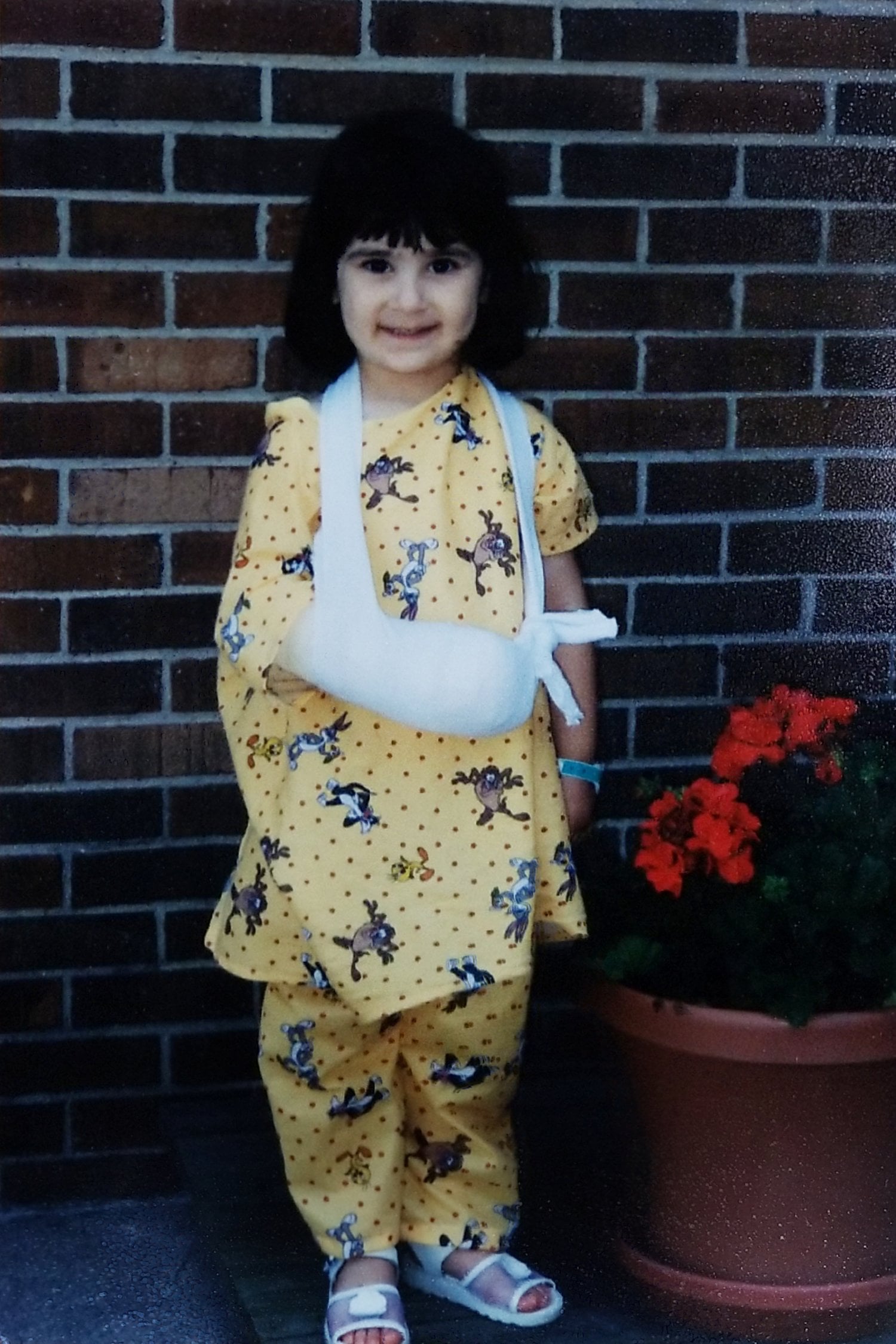 I can remember being 4, in a booster seat in the back of my dad's car. I don't remember where we were going, but I distinctly remember holding up my middle finger so the people driving behind us could see it. My dad saw what I was doing, and if my memory is correct, he made eye contact with me in the rearview mirror and said, "Jess-Jess, what are you doing? Put your finger down — that's not nice." To which I replied with something along the lines of, "I'm just showing the people behind us my big finger, Daddy!"

As a child, I was eager to show off my fingers. I thought they were cool. I was different than everyone else, and I was proud of it. My family always told me that my fingers made me special, and I believed them, but as I got older, my mentality changed.

Almost 20 years after my dad scolded me in his car, we had a very similar conversation to the one that we had when I was 4. He called me out for something that I didn't even know I was doing. This time, he asked, "Why are you doing that Jess?" I had no idea what he was talking about. "Why are you hiding your fingers? Are you doing it on purpose?" I couldn't give him a straight answer, because I didn't have one.

I was born with a condition called macrodactyly, meaning that I was born with larger-than-average digits. The middle and index fingers and bones are longer and wider on my right hand than my normal fingers. My middle finger is bulbous at the end, and when I was younger, it curved at the top and crossed over my ring finger. To me, they've always just been there.

My uncle was actually the first person to notice them. I think my parents were just so caught up in the joys of having their first child that they didn't really notice, and Lord only knows how the doctors missed them. When my parents asked the doctors about my fingers, they were given two options: they could let me keep them or have them amputated. (Spoiler alert: I got to keep them.) My parents took me to several different hand doctors before they found one whose first thought wasn't to amputate my fingers. Dr. Mehul Mehta, an orthopedic hand surgeon, suggested a surgery to stop my fingers from growing in length, straighten out my middle finger, and relieve my carpal tunnel, which was caused by my condition.

I underwent three surgeries by the time I was 8, the first being at the age of 4. All of my operations consisted of getting rid of the growth plates and putting pins in my fingers to straighten them and stop growth. The operations didn't make my fingers look "normal," by any means, but they helped to stop them from becoming grossly oversized. Just to clarify, my fingers may technically be a "disability," but I can still do normal, everyday tasks.

Adults almost always preface their questions with, "Can I just ask . . . ?" And then they go into, "What happened to your finger?"

I've gotten a lot of stares in my 21 years, and sometimes I feel like an animal at the zoo or one of P.T. Barnum's circus acts. Kids are usually fascinated and are reprimanded by their parents when they ask questions. Adults almost always preface their questions with, "Can I just ask . . . ?" And then they go into, "What happened to your finger?" I work at the front desk of a residence hall, so I get many comments from college students who are either really respectful or blatantly rude. And then, of course, there are the people who don't notice or ignore it altogether.

Apart from being questioned 24/7, I've also had my fair share of rude encounters, like the four college-aged girls who approached me while I was at work. They very obviously stared at my hand as I reached for the computer mouse and immediately began to whisper and laugh while I was sitting not even two feet away.

There was also the guy on Halloween who asked, "Is that your Halloween costume?" Yes, sir. I most definitely dressed up as Girl With Big Fingers. I'm so happy you noticed. By now, I'm used to rude comments and stares, but they still make me feel like sh*t. Just like anybody else would, I get uncomfortable and angry, and my face gets red, but I somehow always manage to keep my composure. Usually, I'll crack a joke or two to ease tensions and, if I'm being honest, to make myself feel better. I'm almost always humorous when it comes to discussing my fingers. It's a way of coping with being different. I think that making people laugh has always been my way of owning my situation. If people are laughing with me, they can't be laughing at me.

What people don't realize is that I use humor to put up a front. It gives me the power to control the direction of a conversation. If I'm making fun of myself, nobody has the chance to make fun of me — I beat them to the punchline.

Related:
This Is What It's Like to Live With Birth Marks Covering Your Face and Body

Despite my comedic act, living with a "disability" really isn't that funny. The reality is it's incredibly easy to portray yourself as a confident person, and I do that through humor, but it's extremely difficult to actually have that confidence. I struggle every day with my insecurities. They can be paralyzing and depreciating to the point where all I can focus on is one awful thing someone said to me, and I end up picking myself apart over it.

Sometimes it gets so bad that I start to wonder what it would be like to be "normal." Would my life be any different? Would I have been a different person altogether? I could undergo surgery for a fourth time to thin out my fingers, but if my doctor ruins a nerve, I could lose all feeling in my right arm. Would it be worth it? Would having "normal" fingers make me more beautiful? Would I be a better person?

I'm not at all ashamed of who I am, but I feel like by wanting to be "normal," I'm betraying myself. It's a struggle between wanting to accept yourself and wanting to be like everyone else, and there's no exact way to navigate it. As far as normalcy goes, this is my version of it, and I need to learn to fully embrace it.