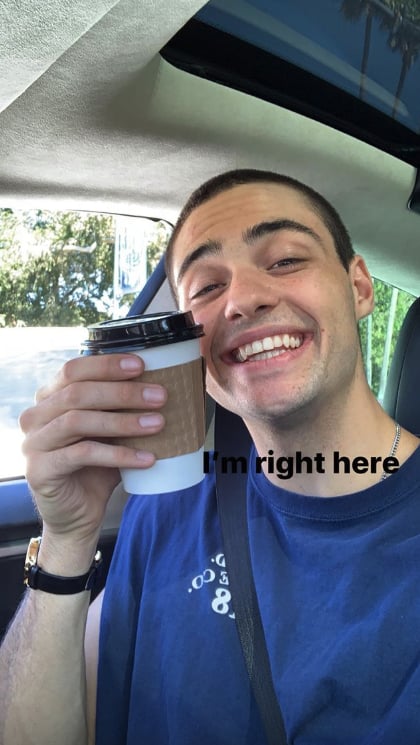 Noah Centineo Has Traded His Curly Hair For a Shaved Head, and Fans Want Answers

Noah Centineo is known for causing heart palpitations for a few reasons, one of which is his hair. But the 23-year-old heartthrob has traded his luscious, curly hair for a shaved head, so you might want to prepare yourself. The big reveal was made in the afternoon on Tuesday with a simple image in Centineo's Instagram Story. He shared just one photo, signature smile included, but with a very different look overall thanks to his fresh cut. He wrote, "I'm right here," on the photo and held up a coffee cup. This was in response to his girlfriend Alexis Ren's Instagram Story of two coffee cups on a table outside with the caption, "Where's maaaahhh babyyyy."

This isn't the first time this year that Centineo has made a drastic change to his appearance. Just last month, he dyed his beard blond, which was an interesting choice. That was a short-lived phase, and the To All the Boys I've Loved Before actor is now clean-shaven — very much so, thanks to his new hair, or lack thereof. The popular actor's fans immediately noticed the big change and took to Twitter to ask the important questions: is this for a role? Just for fun? We'll have to wait until Centineo addresses it to know for sure. In the meantime, see how big this transformation really is.