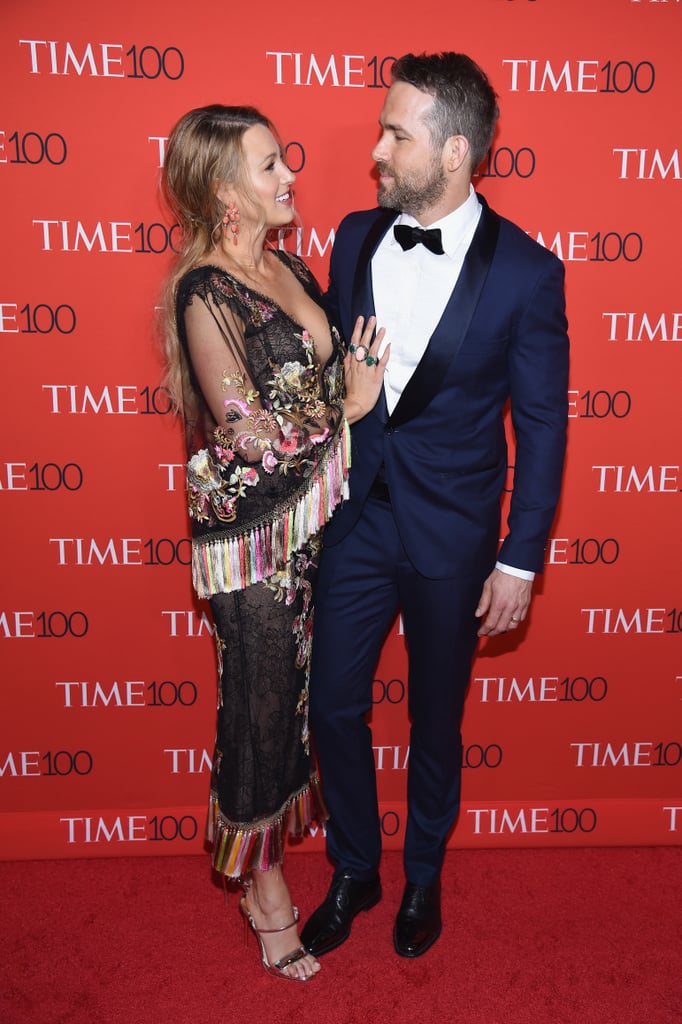 Ryan Reynolds and Blake Lively showed up in style for the annual Time 100 Gala in NYC on Tuesday night. The actor looked handsome in a blue suit while Blake was her usual stunning self in an embroidered Marchesa dress with rainbow tassels. Ryan took turns posing with Blake as well as with his mom, Tammy, who we also got to see back in December when Ryan was honored with a star on the Hollywood Walk of Fame. The Time event also brought out fellow stars Naomi Campbell, Viola Davis, John Legend, and Leslie Jones, who all made Time's list of the Most Influential People of 2017 along with Ryan. Blake and Ryan met up with John and Chrissy Teigen inside, and Leslie ran up on Blake and Ryan, and the cameras caught their incredible conversation. His Woman in Gold costar Helen Mirren sang his praises in a heartfelt essay for the magazine, saying, "He's the Everyman, but somehow with more of everything: wit, elegance, looks, and general hunkiness."

The last time we saw the couple on the red carpet was at the Golden Globes back in January, when the Deadpool actor shared an impromptu kiss with Andrew Garfield. But it was Blake who made headlines this time during a solo outing last week. While attending the Variety Power of Women Luncheon, where she was being honored for her contributions to worthy causes, Blake was asked by a reporter what her "go-to power outfit" is. The former Gossip Girl star didn't take too kindly to the question, snapping, "Come on, what about building women up? Outfits? Would you ask a man that?" When the reporter attempted to explain her question, Blake cut in: "I know, but you wouldn't ask a man what a power outfit was. I'm sorry, but this is the moment that we become more aware and that we change and that we build women up. So, you can ask me another question."