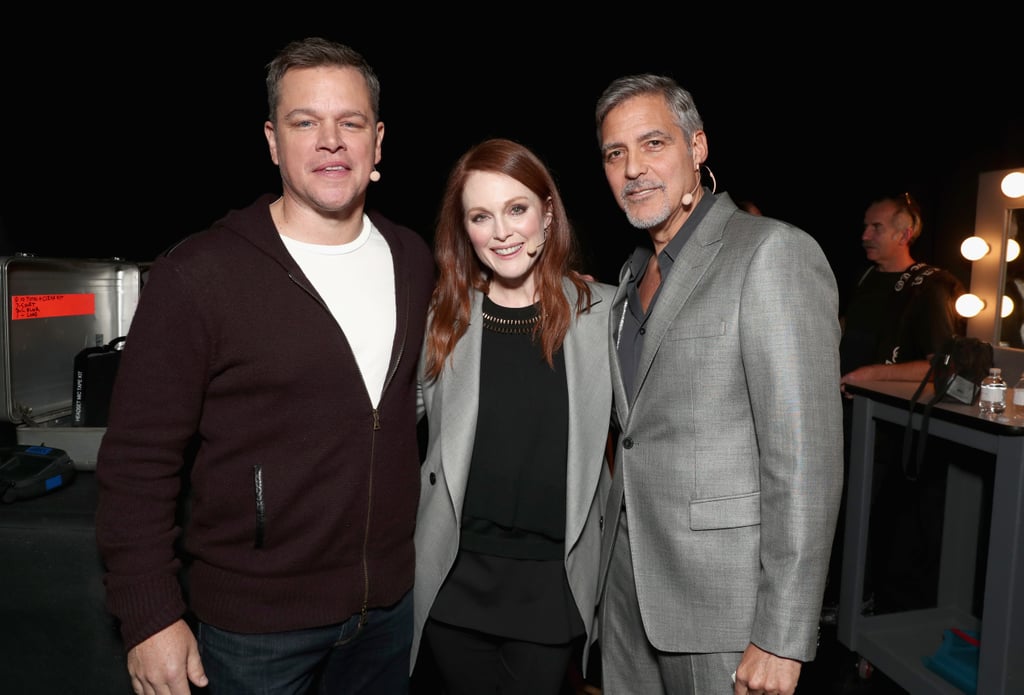 George Clooney popped up at CinemaCon in Las Vegas on Tuesday to promote his upcoming film, Suburbicon. The actor — who is expecting twins with wife Amal — looked dashing in a gray suit and appeared to be in a good mood as he spoke on stage with costars Matt Damon and Julianne Moore and mingled with Dwayne Johnson. In addition to promoting the movie, George gave an update on Amal's pregnancy, telling Extra, "She is doing really great. She is amazing. I don't have anything to do. There is nothing I can do to help, but make tea and stuff." The babies will be the first children for both Amal and George, and the actor is ready for them to arrive. "I know swaddling. I know what I'm in for," he said. He also joked that diapers will be an important part of life "for me, not for the kids."

Julianne, who has been a friend of George's for years, also thinks he is ready to be a dad. "I think it is great. I think he is going to be a natural. I'm not worried about him at all," she said. The only thing George should be worried about? Deciding on names for the twins, since Amal wasn't thrilled with his first idea. "My wife says I can't name them Casa and Amigos," he joked with Entertainment Tonight. "That's the one thing I'm not allowed to do." This is of course in reference to the tequila company the 55-year-old actor co-owns with business partner Rande Gerber, called Casamigos. We wonder how Amal feels about the name Suburbicon . . .