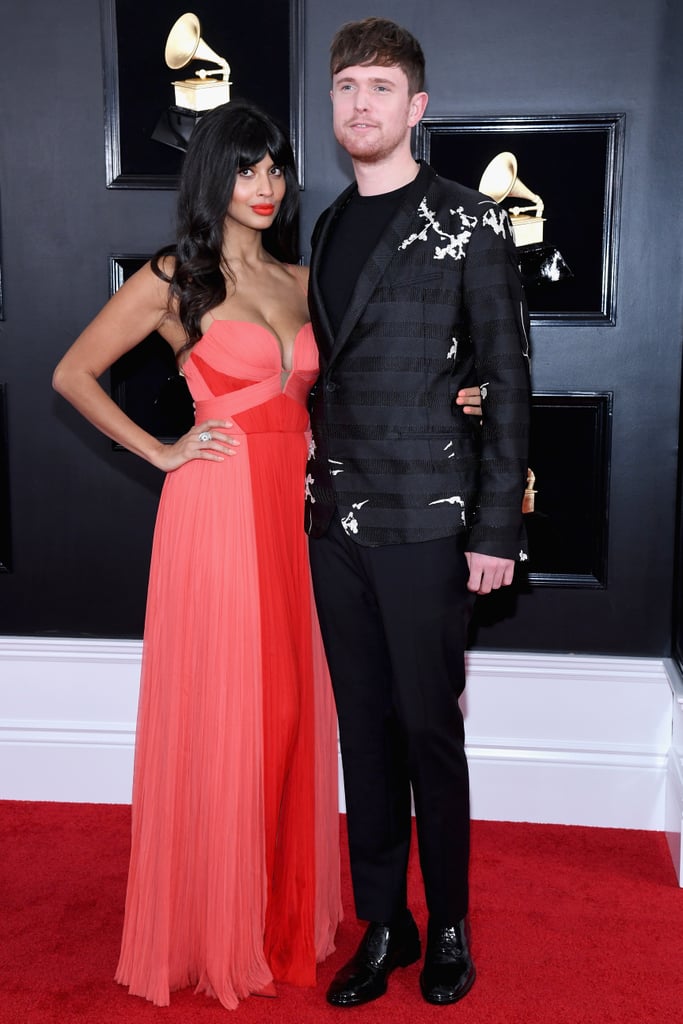 Jameela and James at the 2019 Grammys

Wherever they are together, it's definitely the good place. Jameela Jamil and James Blake put their love on display at the 2019 Grammys, and while the fake goldfish in the actress's earrings definitely knew what was up, their relationship caught many people by surprise. After James won best rap performance at the award show for his work on "King's Dead" with Kendrick Lamar, Jay Rock, and Future, Jameela was right by his side supporting him and there's no better time to celebrate their love than fresh off of his exciting win.

While it's unknown how the musician and The Good Place actress met, their relationship has been going strong since 2015. In 2016, James spoke vaguely about their bond in an interview with Time Out and how she inspired him with his music at that time. "In terms of becoming more open, I guess I had help just by meeting somebody who was much more open than I was, and much more confident than I was. It helped me rise to the plate," he said.

And years later, Jameela continued to inspire James with his latest album, Assume Form. Following the album's release, James thanked his love on Twitter. "To @jameelajamil I love you and you are the reason this album exists, but now everyone else has it, so I'll see you at home in 30 mins and we can talk sh*t about everyone." Correct us if we're wrong, but a major key to a successful relationship is talking crap about everyone, so it's clear these two are in it for the long haul.

Jameela and James have been by each other's side at award shows and during major life milestones. They're relatively private about their relationship (which is why some people were surprised after seeing them together at the Grammys), but occasionally, they'll give each other heartfelt shout-outs on social media, and it's forking adorable! Ahead, see some of Jameela and James's cutest moments over the years.

Related:
Here's Your A to Z List of All the Celebs Who Attended the Grammys This Year
Previous Next Start Slideshow
Celebrity InstagramsCelebrity CouplesCelebrity PDACelebrity FactsJameela JamilJames Blake

Ashley Graham
It Needs to Be Said: Ashley Graham's Stretch Marks in This Pregnancy Selfie Are Gorgeous
by Chanel Vargas 8 hours ago

Celebrity Couples
OK, Seriously, Is It Possible For Zendaya and Tom Holland to Be Any Cuter Around Each Other?!
by Njera Perkins 10 hours ago

Billie Eilish
Well, That Was Fast: Billie Eilish Is a Brunette Now
by Kelsey Garcia 14 hours ago