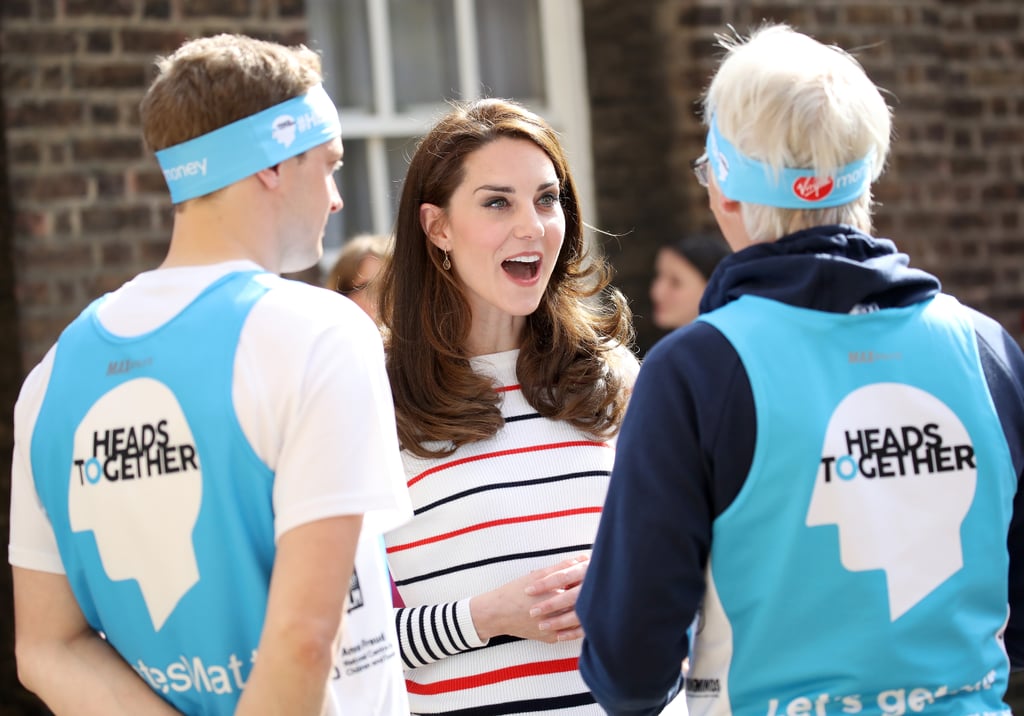 A few days after celebrating Easter Sunday with the queen, Kate Middleton met with a group of runners from Team Heads Together in London on Wednesday. The duchess kept things casual in a striped shirt and Superga sneakers as she chatted and posed for photos with the team, who are gearing up to run the London Marathon this Sunday. While Kate didn't join them for a jog this time around, she was all smiles while mingling with the group and affixing a Heads Together headband onto a post box.

Heads Together is spearheaded by Kate, Prince William, and Prince Harry in partnership with eight leading mental health charities that are tackling the stigma of mental health issues and providing help for those who suffer from them. Earlier this week, Prince William shared a video of himself FaceTiming with Lady Gaga to discuss the importance of mental health awareness, and Harry opened up about being "very close to a mental breakdown" after the death of his mother, Princess Diana.

In a little over a week, Kate and William will be ringing in their sixth wedding anniversary. It's not clear what they'll be doing to commemorate the big day, but judging by their very chill past celebrations it'll probably be something pretty low-key. Maybe a day in Hyde Park with George and Charlotte or a night of dinner and dancing?

The Royals
Sundance 2022: 5 Chilling Takeaways From The Princess
by Monica Sisavat 1 week ago

Lily Collins
Apparently, Lily Collins Met Princess Diana When She Was a Toddler, and We're Very Jealous
by Navi Ahluwalia 3 weeks ago