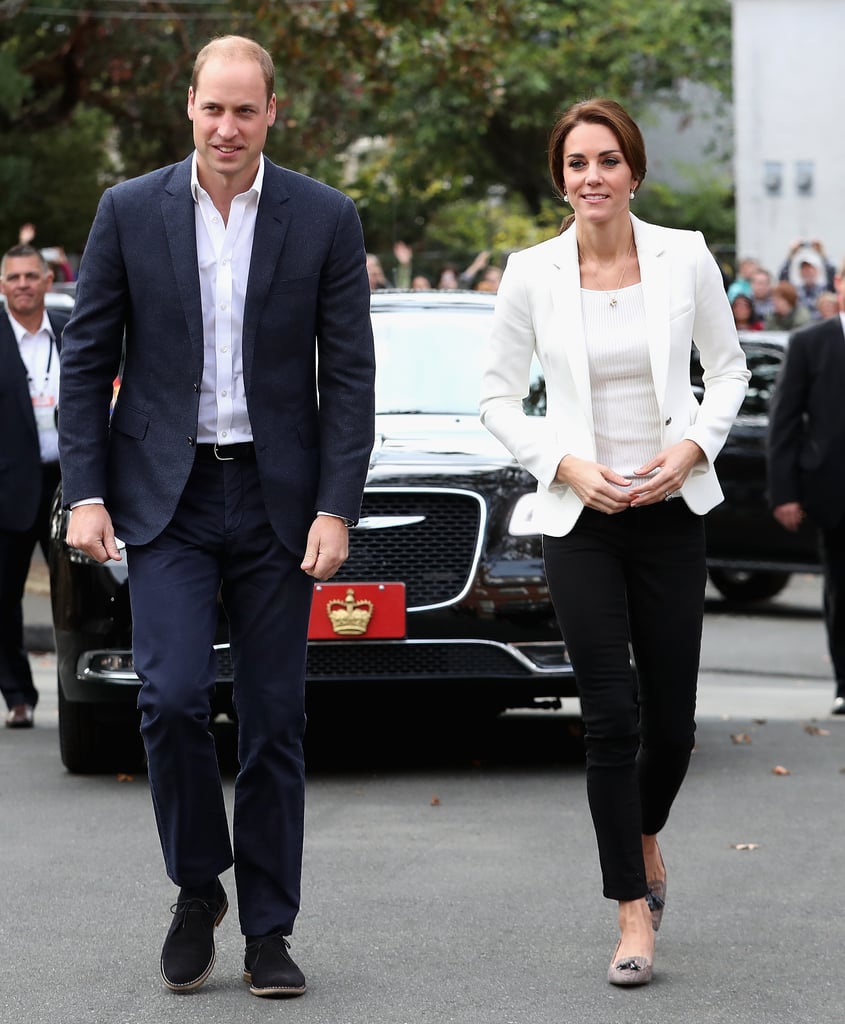 Prince William and Kate Middleton spent their final day of their royal Canadian tour on Saturday by meeting with children at The Cridge Centre for the Family in Victoria, Canada. While there, the couple received personalized Vancouver Canucks jerseys for Princess Charlotte and Prince George. Hours later, Will and Kate sailed toward Victoria's Inner Harbour aboard a tall ship. Just the day before, they helped row a 25-foot Haida war canoe on their visit to the island of Haida Gwaii. Once there, they visited the Haida Heritage Centre and Museum and spoke with locals. Earlier in the week, they made a visit to the MacBride Museum on Wednesday, where they sent a telegram and read stories to children, and later headed to Carcross to watch a cultural welcome. The day before, the two traveled to the University of British Columbia Okanagan, where they met with members of the Okanagan Nation Alliance and unveiled a plaque commemorating the school's 10-year anniversary. They then touched down in Whitehorse, where they chatted with Canadian rangers at the airport, sampled Indian food and met with children at Mission Hill Winery in Kelowna, and attended a cultural performance at the Kwanlin Dun Cultural Centre on the banks of the Yukon River.

On Monday, Will and Kate attended a reception at the Government House in Victoria, British Columbia, Canada. William looked sharp in a blue suit, while Kate channeled the late Princess Diana with her striking red dress, and earlier that evening, the two braved the rain to attend a special welcome ceremony with first nations community members in Bella Bella. The couple took a walk through the Great Bear Rainforest before sitting front row at a performance from children, who entertained the royals with a traditional song and dance routine. After the show, Prince William addressed the crowd, saying, "It gives me great pleasure to be here today as the Great Bear Rainforest is officially committed to the Queen's Commonwealth Canopy," and spoke on behalf of his grandmother, Queen Elizabeth II, adding, "Her Majesty is immensely grateful to you and the people of Canada for the leadership you have shown in making this contribution."

After touching down at Canada's Victoria Airport with their children last week, William and Kate let Prince George and Princess Charlotte rest as they began day two of the royal tour. The pair looked cheerful when they arrived by sea plane at the Vancouver Harbour Flight Center on Sunday. While William wore a black suit and tie, Kate donned the country's flag colors in her red and white dress. Throughout the day, the two visited various organizations, including Sheway, a charity that supports mothers battling addiction, the Canadian Coast Guard, and the Immigrant Services Society alongside Canadian Prime Minister Justin Trudeau and his wife, Sophie. Their recent tour is especially significant as they last visited the country in the Summer of 2011, just a few months after their April wedding.