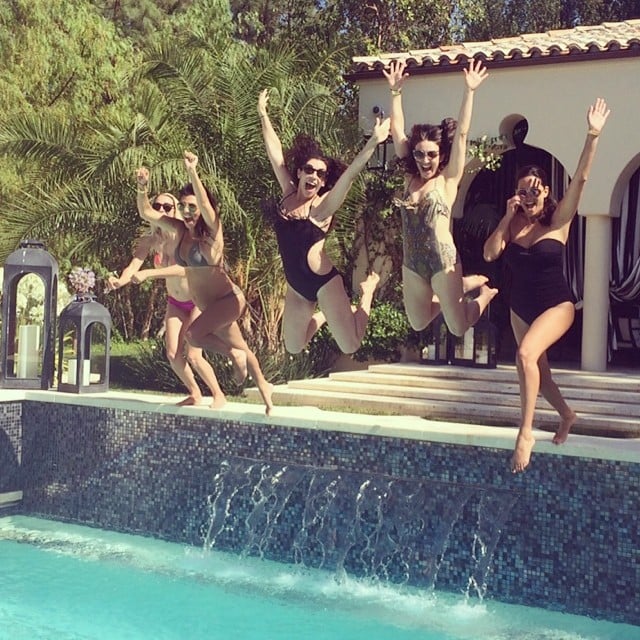 Kourtney and Kim Kardashian are having two starkly different weeks. Kourtney had a fun-filled weekend, baring her baby bump in her bikini on Sunday. Though the news that she's pregnant with her third child was confirmed in a preview for Keeping Up With the Kardashians, she has been covering up with baggy clothes while out and about this Summer.

Meanwhile, Kim is protesting the Beverly Hills Hotel boycott with an opinionated open letter about the recent controversy. Since the announcement in March that the famed hotel's owner, Sultan of Brunei, Hassanal Bolkiah, implemented a homophobic sharia law in his country, many people — celebrities included — have refused to stay there and at the other properties he owns under the Dorchester Collection. These include the Dorchester Hotel in London, Le Meurice in Paris, and Beverly Hills' Hotel Bel-Air. The implementation of sharia law allows for harsh punishments like dismemberment and death by stoning for the "crimes" of homosexual and adulterous acts. Kim moved her bridal shower after hearing about the Sultan's actions and took to her blog on Monday to suggest not boycotting the hotel so that the workers aren't suffering or out of jobs. Read her full letter below:

"My best friend Allison and I wanted to take our babies out to lunch a few days ago after our baby class but there were so many paparazzi swarming us, it would have really scared them. Instead we had to feed them at her place and put them down for a nap. We were planning on taking them to the Beverly Hills Hotel, which is where we always go because they respect not having any paparazzi drive onto their property, but I reminded Allison that my bridal shower was moved from that hotel due to the actions of the Sultan of Brunei. Allison shared with me her view on the situation and we 100% agree that the actions and law enforcements of the Sultan are completely against everything we believe in.

However, I started to realize that maybe boycotting the hotel isn't the best solution either. For a sultan that has 20 billion dollars, this loss of business doesn't even make a dent in his fortunes. But the hotel staff are being negatively affected every day with the boycott that has gone on for weeks now… We shouldn't punish the amazing hard-working people who have been so good to us for years! When I was a little girl, I would ride my bike to the Beverly Hills Hotel on the weekends to eat downstairs in the coffee shop with my dad, and some of the same people still work there! It's sad to see them suffering from this protest. There must be other ways to express our views without punishing the workers, some who I know personally have families at home and depend on the city's business and tips to survive. When I was pregnant, the hotel was my safe haven. There's one waitress that works downstairs who was also pregnant at the same time as me and due just a few weeks apart. We would always share our pregnancy stories with each other. I know for a fact she has a new baby at home that she has to feed, so this boycott is affecting her tremendously. The hotel is a piece of LA's history as well as many of our own personal memories.

I support Rose McGowan and Russell Crowe's takes on this matter. The unjust treatment and violation of rights of the LGBT community around the world is never justified and I will continue to proudly support the LGBT community in every way imaginable. I do believe though that instead of this boycott, there has to be another solution. I'm glad to hear that industry executives like Jeffrey Katzenberg and Casey Wasserman are reaching out to leaders of the hotel chain to discuss a way to potentially end the protest. I hope we can come together and stand up for our beliefs while still making sure good people aren't wrongfully hurt in the process. Boycotting the hotel won't affect the sultan, just our dear friends who work there. For every warm smile when they greet us and for all the dedication they put in to make our experiences more enjoyable, I hope we can return the same love and compassion to make sure they're not forgotten during this protest. Xo. With love, Kim."

Mandy Moore
A Round of Applause For Mandy Moore, Who Was Still Filming This Is Us at 38 Weeks Pregnant
by Victoria Messina 18 hours ago