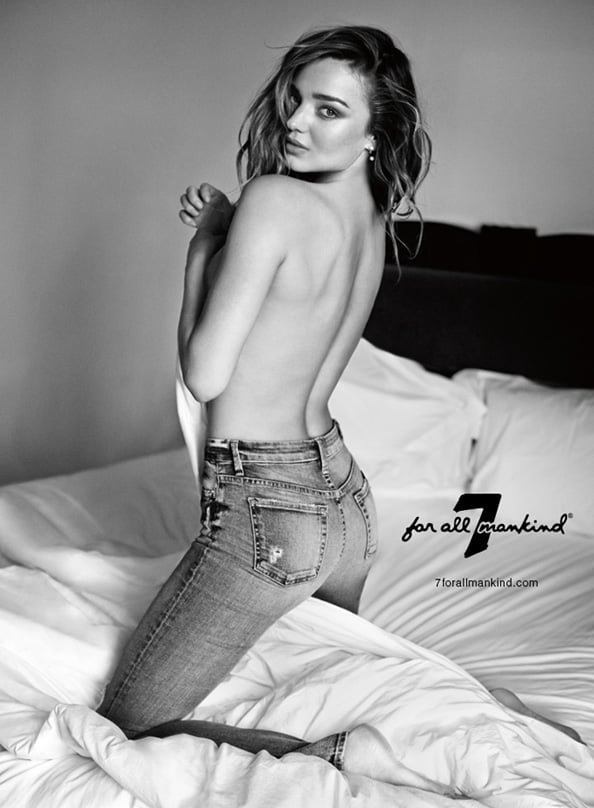 Miranda Kerr may reportedly be at the center of a heated celebrity feud, but it doesn't mean her career is slowing down. The model's new ad campaign for 7 For All Mankind was revealed this week, and it features her looking supersexy — both alone and with an equally hot male model — while posing topless in a pair of the brand's skinny jeans. In the accompanying black-and-white video, Miranda professes her love for the denim, cooing, "I love them . . . they feel so good," while rolling around on a bed. Miranda's new project was unveiled on Wednesday, not long after news broke that her ex-husband, Orlando Bloom, got into a heated fight with Justin Bieber during a night out in Ibiza, Spain. Orlando was caught on video taking a swing at the pop star after he reportedly made a comment about Miranda. Justin and Miranda were rumored to have hooked up after the Victoria's Secret Fashion Show in 2012, but the argument could have also been due to the fact that Orlando was photographed with Justin's ex, Selena Gomez, earlier this year.

No matter the origin of the outburst, Miranda is likely not letting it get her down. She has yet to address any of the reports, but instead took to Instagram on Wednesday to share a sneak peek of her new campaign as well as a sweet photo of herself and son Flynn taking a stroll in NYC. Keep reading to see Miranda in her steamy new ads.

Source: 7 For All Mankind / Sebastian Faena