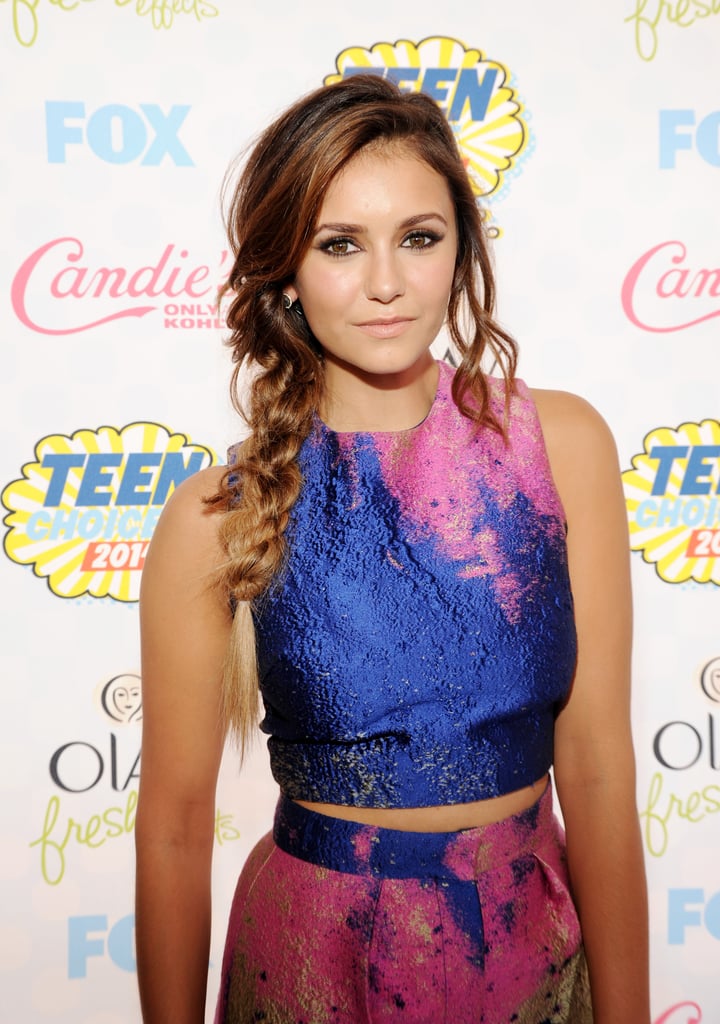 Nina Dobrev Brings Her Sexy, Single Self to the Teen Choice Awards

Nina Dobrev struck a sultry pose on the red carpet at the Teen Choice Awards in LA on Sunday. The Vampire Diaries star showed up in a colorful crop top and matching shorts for her big night; Nina was nominated for the choice TV actress in a sci-fi/fantasy show for her role on the CW hit, but things took a funny turn when she hit the stage with Kellan Lutz to present an award to Shailene Woodley. Once at the podium, Kellan joked about the recent rumors surrounding Nina's dating life, saying, "Don't stand near me. I hear you are dating like five guys right now." After Nina insisted that those were "just tabloids", Kellan initiated a "five-foot radius rule" in order to dissuade any dating rumors between them.

Nina has been gaining lots of attention where her personal life is concerned — the actress has been rumored to be dating actors Orlando Bloom, Ben McKenzie, and Derek Theler, who was also on hand at the TCAs Sunday evening. Nina herself even poked fun at all the relationship reports in a recent Instagram snap, saying, "Apparently I have SOOOO many boyfriends. Here's four more. I'm so busy." In addition to her small-screen success, Nina has been hitting the red carpet circuit hard this past week to promote her new movie, Let's Be Cops. One of her memorable press-tour stops was in NYC for an interview and game of giant beer pong on The Tonight Show Starring Jimmy Fallon.

Red Carpet
Who Can Think About Low-Rise Jeans When We Have Vanessa Hudgens's Jaw-Dropping Hip Cutouts?
by Sarah Wasilak 3 days ago