Shannen Doherty has been battling breast cancer for two years, but on Friday, the former Beverly Hills, 90210 star shared some encouraging news about her health via Instagram. Along with a photo of herself in a baseball cap and sneakers, Shannen announced that she is in remission after completing chemotherapy in late February. "What does remission mean? I heard that word and have no idea how to react. Good news? YES. Overwhelming. YES," she wrote. She detailed the "crucial" next five years of her life, including "several" reconstructive surgeries and the "decision on taking a pill that comes with its own set of problems and side effects." She ended the heartwarming note: "I am blessed, I know that. But for now.... remission. I'm going to just breathe. #cancerslayer." 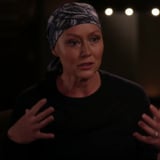 Shannen was diagnosed with cancer in March 2015 and has been open about her fight and treatment ever since. Famous friends and former costars like Jennie Garth, Luke Perry, and Rose McGowan have paid homage to the Charmed actress. Most recently, Sarah Michelle Gellar recognized Shannen on her birthday, sharing a photo of the two that she captioned, "She's everything. . . I thought I knew how tough she was, but I didn't even have a clue to her power."

Kendall Jenner
Kendall Jenner Wears a Hibiscus-Print Bikini and Confirms the News: Body Chains Are Back
by Sarah Wasilak 1 hour ago

Celebrity Instagrams
The Highlight of Tracee Ellis Ross's Beach Party For One? Her High-Waisted Lounge Pants
by Chanel Vargas 17 hours ago

Celebrity Instagrams
These Celebrity Collarbone Tattoos Are So Hot, You're Going to Need a Glass of Water
by Danielle Jackson 18 hours ago

Celebrity Instagrams
Tallulah Willis Found the Perfect Diamond For Her Engagement Ring, With "No Stone Left Unexamined"
by Sarah Wasilak 21 hours ago