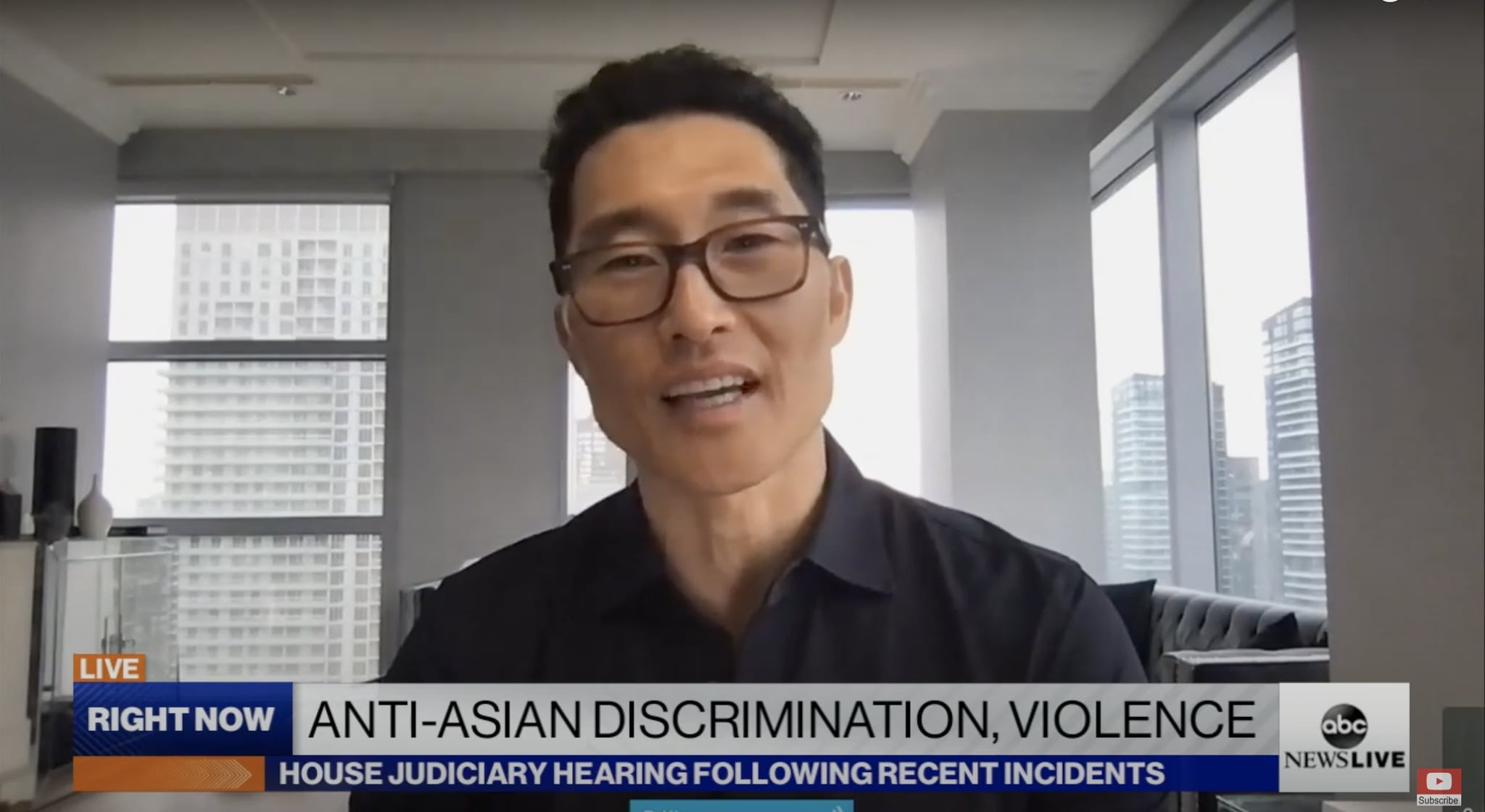 Following the horrifying Atlanta spa shootings that killed eight people on March 16, Daniel Dae Kim joined lawmakers, scholars, and advocates in testifying before Congress about the recent alarming rise in anti-Asian hate crimes. Speaking before the House Judiciary Subcommittee on the Constitution, Civil Rights, and Civil Liberties on Thursday, Daniel cited examples of the striking acts of violence and discrimination Asian Americans face on a daily basis, including those faced by 84-year-old Vicha Ratanapakdee, 75-year-old Pak Ho, and jazz pianist Tadataka Unno.

"What happens right now and over the course of the coming months will send a message for generations to come as to whether we matter."

"I'm not naive enough to think that I'm gonna convince all of you to stand up for us — trust me, I've seen your voting records," he said. "But I am speaking to those to whom humanity still matters . . . There are moments in a country's history that chart its course indelibly for the future. For Asian Americans, that moment is now. What happens right now and over the course of the coming months will send a message for generations to come as to whether we matter. Whether the country we call home chooses to erase us or include us, dismiss us or respect us, invisibilize us or see us. Because you may consider us statistically insignificant now, but one more fact that has no alternative is that we are the fastest-growing racial demographic in the country. We are 23 million strong, we are united, and we are waking up."

During his testimony, Daniel recounted speaking to a pollster during the recent 2021 presidential election. "I asked him why, when I see polling results broken down by race, do I still rarely see Asian-Americans as a separate category?" Daniel said. "He heard my question, he looked me dead in the eye, and he said, 'Because Asian-Americans are considered statistically insignificant' . . . Statistically insignificant literally means we don't matter. We as Asian Americans have come to this country because we believe in the American dream. Many of us have succeeded. And some of us are even the frontline healthcare workers upon whom we've all come to depend during this terrible pandemic. But many of us are struggling, too. In fact, the wealth disparity between the richest Asian Americans and the poorest is the largest of any ethnic group in America . . . We simply cannot continue to live with the myth that the most successful of us represent the totality of us."

Related:
Celebs Plead to #StopAsianHate After Atlanta Shootings: "Your Silence Is Complicity"

To make this change, he said we must begin by ending the erasure of Asian Americans from US history and empowering local community organizers by directing funds to organizations fighting for the AAPI community. Daniel also took the opportunity to encourage Congress to pass the COVID-19 Hate Crimes Act, which would "facilitate the expedited review of COVID–19 hate crimes, and for other purposes."

Daniel's testimony comes one day after he appeared on Cuomo Prime Time and revealed that his sister experienced a hate crime in 2015. "She was running in her own neighborhood when a man driving a car came up to her and yelled at her to get on the sidewalk when she was running on the shoulder," he explained. "She said she would do that, and the man then backed up and hit her with the car. My sister turned around and was shocked, and told him that 'You just hit me.' He backed up the car, and as my sister was walking away, hit her again, knocking her to the ground . . . This man had a history of violence toward other Asian women, but when it got time to prosecute him, the D.A. was telling my sister that 'We'll never get a hate crime. You should just hope for whatever you can get.' He ended up getting convicted of reckless driving when he used his car as a weapon to kill my sister, and there was no one in the system who was willing to help her shepherd this case to the appropriate justice."

See a clip from Daniel's impassioned speech before Congress below.

Daniel Dae Kim on House bill condemning anti-Asian sentiment: "I was disheartened to find that for a bill that required no money or resources, just a simple condemnation of acts of hate ...164 members of Congress—all Republican—voted against it." https://t.co/Apq0AYUMdR pic.twitter.com/B2ZY10Rwlo