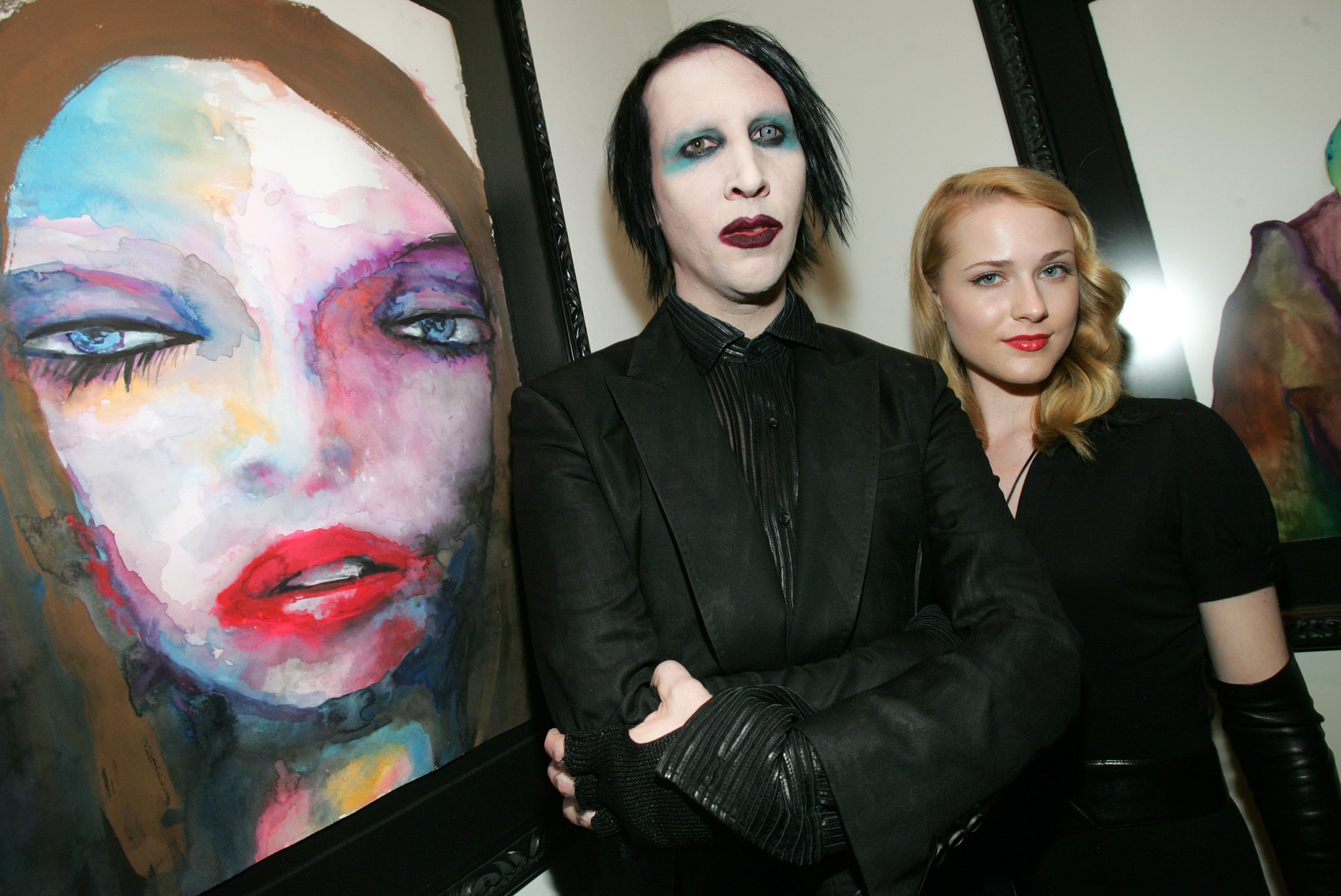 Evan Rachel Wood details years-long abuse she allegedly suffered at the hands of her ex-fiancé, Marilyn Manson, in the new docuseries "Phoenix Rising." The series, which debuted at the 2022 Sundance Film Festival, sees Wood recount in episode one an incident where Manson, born Brian Warner, reportedly raped her on the set of the music video for his 2007 song "Heart-Shaped Glasses (When the Heart Guides the Hand)."

Wood alleges that during a "simulated sex scene," the musician "started penetrating me for real." She adds, "I was coerced into a commercial sex act under false pretenses. That's when the first crime was committed against me, and I was essentially raped on camera." According to the actor, Manson gave her strict instructions following the photo shoot to paint the music video as a "great, romantic time" when speaking to journalists. "I was scared to do anything that would upset Brian in any way. The video was just the beginning of the violence that would keep escalating over the course of the relationship," Wood says in the documentary.

Manson previously denied the claims in a statement to Entertainment Weekly through his attorney, Howard King. "Of all the false claims that Evan Rachel Wood has made about Brian Warner, her imaginative retelling of the making of the 'Heart-Shaped Glasses' music video 15 years ago is the most brazen and easiest to disprove, because there were multiple witnesses," the statement read. "Evan was not only fully coherent and engaged during the three-day shoot but also heavily involved in weeks of pre-production planning and days of post-production editing of the final cut. The simulated sex scene took several hours to shoot with multiple takes using different angles and several long breaks in between camera setups. Brian did not have sex with Evan on that set, and she knows that is the truth."

On March 3, Manson filed a defamation suit against Wood. According to documents obtained by "People," Manson is suing the actor for defamation, emotional distress, and "impersonation over the internet." He accuses her and artist Illma Gore of allegedly recruiting and pressuring women into making allegations against him, as well as reportedly impersonating FBI agents to make their families believe they were in trouble.

Nearly two weeks after Manson's defamation suit against her, Wood appeared on an episode of "The View," where she briefly addressed the situation. "I can't, obviously, speak about any of the specific allegations of the lawsuit, but I am not scared," Wood told "The View" cohosts. "I am sad, because this is how it works, this is what pretty much every survivor that tries to expose someone in a position of power goes through, and this is part of the retaliation that keeps survivors quiet. This is why people don't want to come forward, because this is — this was expected."

"I am very confident that I have the truth on my side and that the truth will come out, and that this is clearly timed before the documentary."

"I am very confident that I have the truth on my side and that the truth will come out, and that this is clearly timed before the documentary. This is the reason. So yes, again, I'm not doing this to clear my name — I'm doing this to protect people," she continued. "I'm doing this to sound the alarm that there's a dangerous person out there, and I don't want anybody getting near him. And so people can think whatever they want about me — I have to let the legal process run its course. And I'm steady as a rock."

In a statement obtained by Entertainment Weekly on Monday, a representative for Manson said, "As we have stated from the beginning, Mr. Warner vehemently denies any and all claims of sexual assault or abuse of anyone." "As we detailed in our lawsuit, nothing that Evan Rachel Wood, Illma Gore or their hand-picked co-conspirators have said on this matter can be trusted," Manson's attorney Howard King added. "This is just more of the same."
On Feb. 1, 2021, Wood came forward with allegations that Manson started grooming her when she was a teen and had "horrifically" abused her for years.

"I am done living in fear of retaliation, slander, or blackmail."

"The name of my abuser is Brian Warner, also known to the world as Marilyn Manson," she wrote on Instagram. "He started grooming me when I was a teenager and horrifically abused me for years. I was brainwashed and manipulated into submission. I am done living in fear of retaliation, slander, or blackmail."

Wood explained her decision to speak out, adding that she wants to "expose this dangerous man" and "call out the many industries that have enabled him" in hopes of preventing him from ruining more lives. She ended her note with, "I stand with the many victims who will no longer be silent."

Along with her Instagram post, Wood reposted several accounts from others detailing their own alleged abuse from Manson, including photographer Ashley Walters and model Sarah McNeilly. She also shared previous tweets from Manson's former personal assistant, Dan Cleary, who stated that the singer "broke" Wood and "turned her into a different person" during their time together.

Wood and Manson first got together in January 2007 and became engaged in January 2010 before breaking up for good seven months later. In February 2018, Wood appeared before the House Judiciary Committee to support the Sexual Assault Survivors' Bill of Rights Act. While she did not name her abuser at the time, she did highlight her own experience with abuse. "It started slow but escalated over time, including threats against my life, severe gaslighting and brainwashing, [and] waking up to the man that claimed to love me raping what he believed to be my unconscious body," she said. "And the worst part: sick rituals of binding me up by my hands and feet to be mentally and physically tortured until my abuser felt I had proven my love for them."

The following year, Wood testified again in front of the California Senate Public Safety Committee, recalling an abusive relationship she had been in during her teenage years. In November 2020, Manson's team released a statement addressing Wood's testimony after the singer ended an interview with "Metal Hammer" when the subject was brought up.

"Unfortunately, we live in a time where people believe what they read on the Internet, and feel free to say what they want with no actual evidence," the statement read. "The effects can be catastrophic and promoting non fact based information is wholly irresponsible. All we can try and do, as the media and individuals, is to use facts and truth and not hide behind gossip and conjecture to further our own agendas."

Manson has since been dropped from his music label, Loma Vista Recordings, and CAA talent agency. "In light of today's disturbing allegations by Evan Rachel Wood and other women naming Marilyn Manson as their abuser, Loma Vista will cease to further promote his current album, effective immediately," the statement read, according to Variety. "Due to these concerning developments, we have also decided not to work with Marilyn Manson on any future projects."

Manson released a statement of his own on Instagram denying the harrowing allegations. "Obviously, my art and my life have long been magnets for controversy, but these recent claims about me are horrible distortions of reality," Manson wrote. "My intimate relationships have always been entirely consensual."

If you or someone you know would like to speak with someone trained to assist sexual assault survivors, please call the National Sexual Assault Hotline at 1-800-656-4673.