We're getting new insight into Kourtney Kardashian and Travis Barker's engagement. The couple got engaged on Oct. 17 when the Blink-182 drummer proposed at the Rosewood Miramar Beach hotel in Montecito, CA. The sundown proposal, which came as a surprise to Kardashian, took place on the beach in the middle of a heart-shaped rose installation surrounded by candles. Family members, including Kris, Kylie, and Kendall Jenner; Kim and Khloé Kardashian; Tristan Thompson; and Barker's children, were there to watch him pop the question, and the group celebrated with an intimate dinner afterward.

Barker's romantic proposal to Kourtney involved an elaborate plan, but his biggest priority beforehand was making sure her parents were aware of his intentions. During episode three of "The Kardashians," Barker calls Kris to ask for her daughter's hand in marriage. When Kris recalls the moment during a conversation with Kim, she reveals that the drummer also sought the late Robert Kardashian's "blessing," too.

"He asked for her hand in marriage, and I was like, literally, I want to cry now," Kris tells Kim. "It was so sweet and so tender. And then he said he went to your dad's grave and asked your dad [for permission], and I just lost it. It's all happy, I just wish your dad was here to see it."

Barker and Kourtney were longtime friends who turned into lovers, confirming their romance in February 2021. They later sparked engagement rumors during a trip to Disneyland in July, when Kourtney was spotted wearing bridal Minnie ears. On April 4, the couple fast-tracked their whirlwind romance and got "married" at the One Love Wedding Chapel in Las Vegas. The early-morning 30-minute ceremony had an Elvis Presley impersonator present but didn't include a marriage license, so as of right now, the couple are not legally married.

Kourtney explained why the couple's ceremony wasn't legally binding on an April 6 appearance on "Jimmy Kimmel Live" with her famous family. "There was no possibility to get a marriage license at that hour," she said, adding that they didn't want to wait until the morning to obtain their license. "We just did it anyways. It's what's in the heart. It's just not legal." 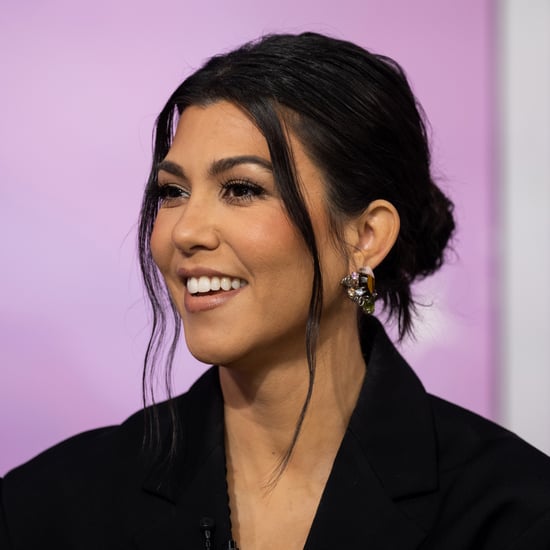