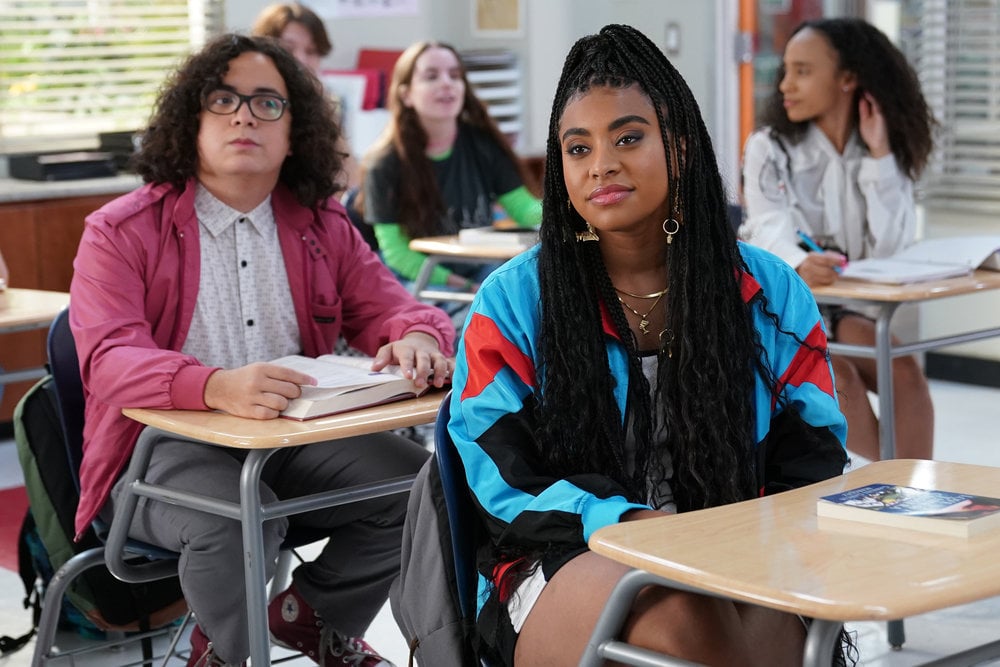 Season two of Saved by The Bell landed on NBC's Peacock last week, starring not one, but two Latinas. The first season got the type of praise that's rare for reboots and it deserved it. This 2020s version of Saved by the Bell uses the same format and location as the original: It's still a thirty-minute comedy about a group of friends at the uber-rich Bayside High. But it also makes fun of itself, getting jokes out of the original cast's escapades while focusing on a newer, more diverse generation.

The second season is just as good as the first, taking place in the post-COVID school year with our teens back on campus and ready to shed their isolation blues. Part of what makes it work is Afro-Latina Alycia Pascual-Peña playing the role of Aisha. She's sort of the new Slater as the athletic best friend and quarterback of the football team. But since the Zack role is also held by a Latina (Haskiri Velazquez as Daisy), their dynamic is more about supporting and less about competing with each other. Plus Mario Lopez is actually still Slater, who's now Bayside's gym teacher and busy learning the emotional intelligence to help him finally surpass his high school self.

So, while we're back at Bayside, it's Gen Z's campus now and that means centering perspectives like Aisha's. She's got a lot of great arcs this season from figuring out her identity after the football season is canceled to exploring a new side to her sexuality. POPSUGAR spoke with the actress who described herself as "an aggressive gal" who bucks all the stereotypes of what it means to be a young, Afro-Latina in Hollywood.

Check out this slideshow to learn more about Pascual-Peña. We're sure we'll be seeing more of her soon!

Related:
Why I'm Excited to See Someone Who Looks Like Me as a Lead Character in a Major Movie
Previous Next Start Slideshow
Saved by the Bell's Alycia Pascual-Peña on the Importance of Afro-Latinx Representation on TV originally posted on POPSUGAR Latina
Saved By The BellIdentityTVCelebrity FactsAfrolatinxBlack JoyAlycia Pascual-PeñaRace And Culture