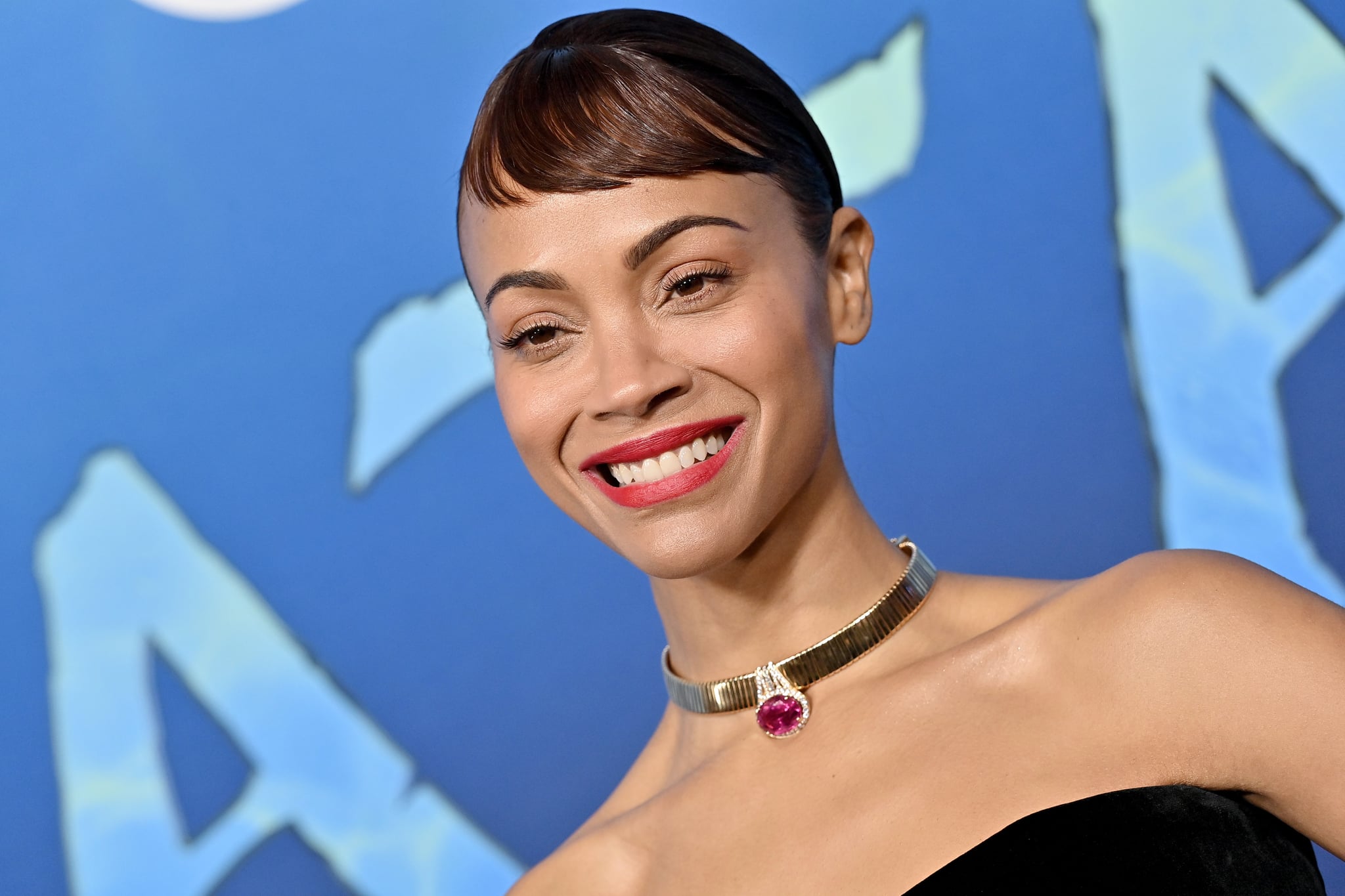 It's been over a decade since James Cameron released "Avatar" in 2009. The fantastical film, known for its innovative digital effects and visual genius, would go on to become the world's top-grossing movie of all time. It starred Sam Worthington as Jake Sully, the paraplegic Marine and hero who gets dispatched on a mission to the moon Pandora, eventually becoming part of the local Na'Vi blue-skinned humanoid tribe. There, he falls in love with Neytiri (Zoe Saldaña), the daughter of the leaders of the Omaticaya.

The original "Avatar" was not only the first film to earn more than $2 billion, but it also led the box office for seven consecutive weeks. It has also undeniably played a major role in Saldaña's career success, which includes other hugely successful movie franchises like Star Trek and Guardians of the Galaxy. Thirteen years later, Cameron's sequel, "Avatar: The Way of Water," is scheduled to open in theaters on Dec. 16 — with Saldaña reappearing as Neytiri, reaffirming her significant place in Hollywood.

Being a part of this highly successful franchise has made Saldaña the only actor who has had three films that made $2 billion or more. Not bad for a girl from Queens, which is exactly how she described it on "The Tonight Show Starring Jimmy Fallon" on Nov. 28.

"It feels great. I feel blessed. I don't take a single day for granted," Saldaña recently told POPSUGAR in a Zoom interview. "But if there's any takeaway from this — if anybody can be inspired by my experience — is that I work really hard and I am really proud of just the work ethic I was raised to believe in."

"But if there's any takeaway from this — if anybody can be inspired by my experience — is that I work really hard and I am really proud of just the work ethic I was raised to believe in."

The actress, who is of Dominican and Puerto Rican descent, has become a household name in Hollywood. Earlier this fall, we got to see Saldaña take on a less action-based character in the acclaimed Netflix series "From Scratch," inspired by author Tembi Locke's memoir and released on Oct. 21.

But trust that none of this success has been due to luck. Saldaña, 44, has worked her butt off since the beginning of her career, and she needed to figure out the kind of actress she wanted to be and the kind of work she wanted to be known for to get to where she's at today.

In a recent interview with InStyle, the actress confessed how her career could have turned out really differently had she not pushed on. She said she almost quit acting entirely after getting her first real taste of Hollywood with her small role in 2003's "Pirates of the Caribbean: The Curse of the Black Pearl." Saldaña's career started to take off after director Steven Spielberg, who directed her in 2004's "The Terminal," told her to be more selective with her roles. Saldaña, who has always been a fan of action and science-fiction films, took on the roles of Uhura in "Star Trek" and Neytiri in the original "Avatar," both of which were released in 2009. It was these two franchises that helped Saldaña figure out her acting strengths and the kinds of films she now wanted to be a part of.

"It just made me feel more free, that I can try new things and not be judged for it because you can't compare to anything," she told InStyle. "I always felt that science fiction gave me that freedom — that sense of escapism — and a sense of comfort."

If we compare the type of roles Latina actresses were offered decades ago with the types of roles we see them play today (think Jennifer Lopez's 2002 "Maid in Manhattan" vs. Jenna Ortega in "Wednesday"), there's no denying that the industry has changed. But the changes haven't just been a result of shifts happening in Hollywood and in our overall culture; it's also because Latina actresses have repeatedly advocated for themselves and turned down stereotypical roles that were setting them back when it came to positive and accurate representation.

Saldaña doesn't take on stereotypical roles. In fact, she doesn't even take on roles that overemphasize her Latinidad. She takes on roles that allow her to explore herself and her creativity as an actress — point blank. And isn't this what every actor strives for, regardless of gender, race, orientation, and ethnicity?

"I'm growing. I'm challenging myself, and the fact that that's bearing fruit is just a testament that when you do the work and you do it with your heart first, it can create great dividends for you."

"I give 100 percent of what I do. I'm constantly studying my craft," she explains. "I'm growing. I'm challenging myself, and the fact that that's bearing fruit is just a testament that when you do the work and you do it with your heart first, it can create great dividends for you."

While many sequels come with their fair share of disappointment — rarely surpassing the original — "The Way of Water" completely challenges that notion. In this installment, we get reintroduced to Jake and Neytiri, who are now parents to four kids: the oldest son, Neteyam (Jamie Flatters); the younger brother, Lo'ak (Britain Dalton); the youngest sister, Tuk (Trinity Jo-Li Bliss); and the teenage sister, Kiri, who we learn is the birth child of scientist Grace Augustine, from the original "Avatar." Interestingly, Sigourney Weaver, who plays Dr. Augustine, also voices the character of Kiri.

In an attempt to save the Na'Vi forest people from Quaritch (Stephen Lang), who wants to colonize Pandora, Jake decides to take his family to the Metkayina people, a Na'Vi subculture of reef people. The film subsequently focuses around the ocean.

The beautiful and 3D aquatic scenes drive home the message, similar to the original film's, that all of nature is connected. In this case, we learn how connected the Metkayina are to the animals of the sea — including a whale referred to as the tulkun. It's just one of Cameron's not-so-subtle ways of touching on issues of sustainability and the environment.

"Jim has always been very vocal about the fears he has as a human being, as a human participant in life, and in the sense of this is what I think would happen if we continue to go down this rabbit hole," Saldaña says of Cameron's intentional environmental message behind the film.

That's a message Saldaña believes is at the heart of the power of the movie: "He does extend on it, but not in a way that is preachy but in a way that's going to spark a lot of curiosity, is going to spark a lot of consideration, and I just hope that people are able to take those conversations back home and stand on them on their own," she continues. And regarding her character of Neytiri, the actress is excited for audiences to see how she's evolved and come into her own.

"Now she's a mother," Saldaña says. "She was really fearless in the first movie. She was very rebellious but still followed her heart, and I feel that those are still going to be there. But now that she's a mother, she's a lot more conscious. There's a lot more sleepless nights, I feel, worrying about whether your kids are going to be OK. Should we live here? Should we go there? And so, [Neytiri] and Jake would have to live with all of those new challenges."

In "The Way of Water," you see Neytiri face major adversity that — if not for her will to push on — could potentially destroy her. Audiences get to witness her ability to allow a devastating loss transform her into an even more powerful being, and we see the ripple effect that leaves on Jake and the family unit. In the end, we are left with yet another Cameron masterpiece about how love, strength, and forward momentum conquer all and how it can only be done with the help of community and our sacred connection to nature. "The Way of Water" forces us to take a closer look at the world around us and our relationship to planet Earth, with the help of blue and green people, 3D animations that practically fly off the screen, and a mystical storyline that's much more reminiscent of our actual reality than we want to believe.

As for Saldaña, it doesn't appear she'll be slowing down anytime soon. "Guardians of the Galaxy Vol. 3" is set to release in May 2023, and she's working on several other productions, including filming for the third, fourth, and fifth Avatar movies. One thing she has proven is that we now live in a world in which Latinx actors shouldn't be pigeonholed into playing roles that are dependent on their heritage and identity. They can merely exist in the movies and TV shows they choose to be a part of, and that time is now.