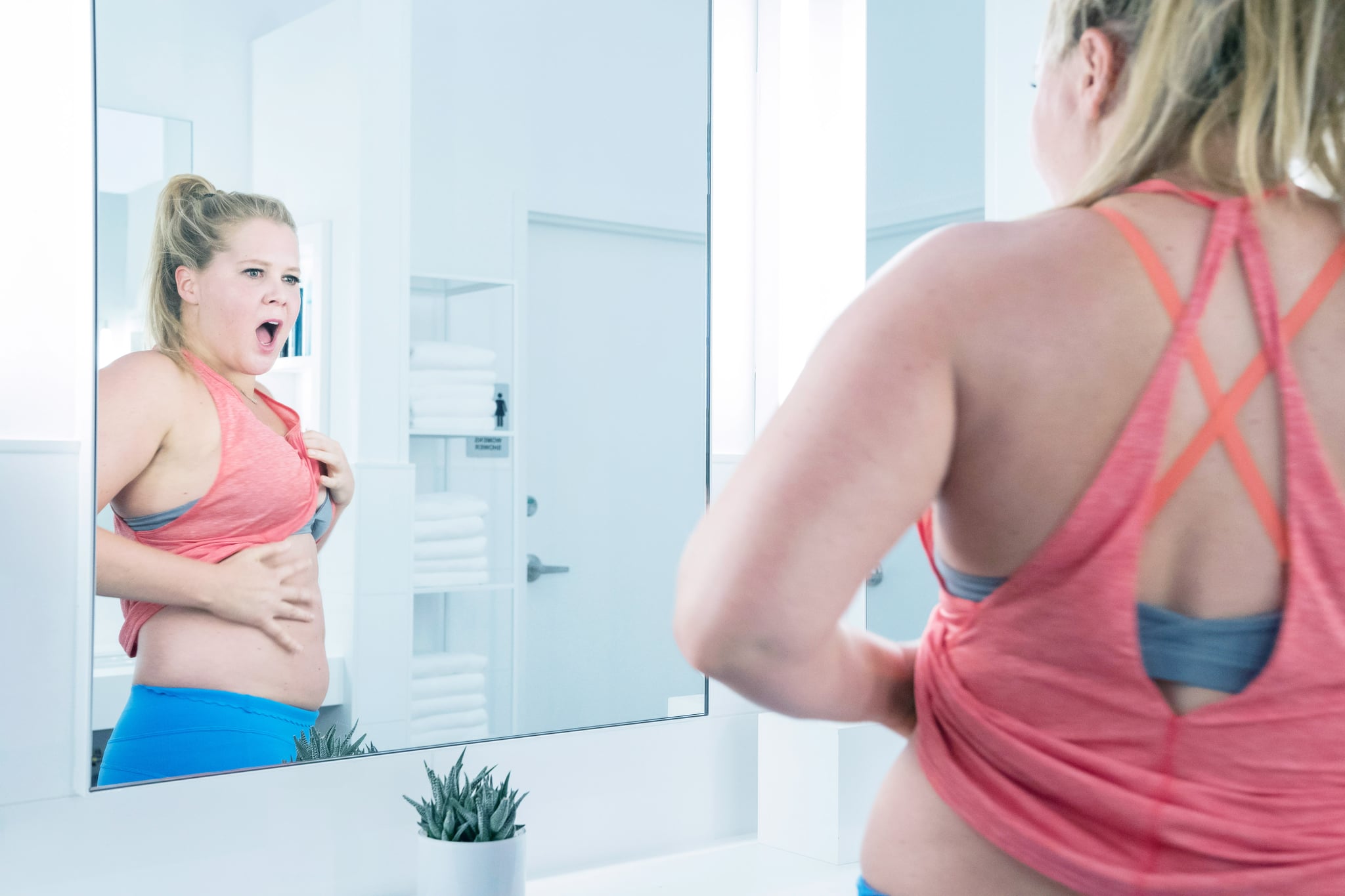 There's a scene not long into I Feel Pretty that's so heartbreaking, it almost makes you forget — just for a moment — that you're watching a feel-good romantic comedy.

Renee (Amy Schumer), an NYC-dwelling woman with major self-esteem issues, comes home to her apartment and strips off her outfit layer by layer in front of a full-length mirror. What's left when she removes her armor of pastel-colored clothing and polka dots is a pair of tight, high-raise Spanx, a plain bra, and an expression on her face of utter defeat. She just quietly, miserably stares at herself.

What makes this scene so effective isn't that Renee dramatically falls to the floor and chokes out loud sobs or starts monologuing about her flaws; it's that she looks at her body with such a tangible hatred and sadness, and then turns around and moves on with the rest of her night . . . like it's nothing. Like it's the most ordinary thing in the world. That, right there, is the crux of I Feel Pretty, which got lost in a tidal wave of backlash immediately after the film's first trailer was released.

Related:
Busy Philipps Reveals the 1 Scene She "Couldn't Keep It Together" For in I Feel Pretty

"I'm not playing, you know, an ugly troll who lives under a bridge. I'm just playing a woman who really struggles with her self-esteem."

The film follows Renee's journey after she suffers a nasty fall at a SoulCycle class, which results in a head injury that makes her think she's transformed into an unrecognizable supermodel. Thanks to her newfound confidence, Renee is able to land a new boyfriend, her dream job, and a bunch of hot "friends," though she assumes the entire time that it's all because of her looks (which, again, have not changed in any way). The heart of the film is that what truly matters is on the inside, and also that everyone has self-esteem problems, regardless of how they look — yes, even when they look like supermodel (and I Feel Pretty costar) Emily Ratajkowski. Unfortunately that got twisted when people assumed from the trailer that Renee was supposed to be seen by other characters in the film as an unattractive woman, too, as opposed to only seeing herself as flawed.

"It made me excited for when people actually see the movie," Schumer told me over the phone about the film's backlash shortly before I Feel Pretty hit theaters. "I think people projected the things they've been through on their own onto it, and I'm not playing, you know, an ugly troll who lives under a bridge. I'm just playing a woman who really struggles with her self-esteem. I don't think it's fair to say who should and shouldn't struggle with that. Everyone struggles with it, and it doesn't matter what you look like. You never see what I see. You never see the image of me looking the way I see myself, so that's just something that they were projecting. I'm like, 'Hey, who said I saw myself as skinny? That's not what I was picturing at all.'" 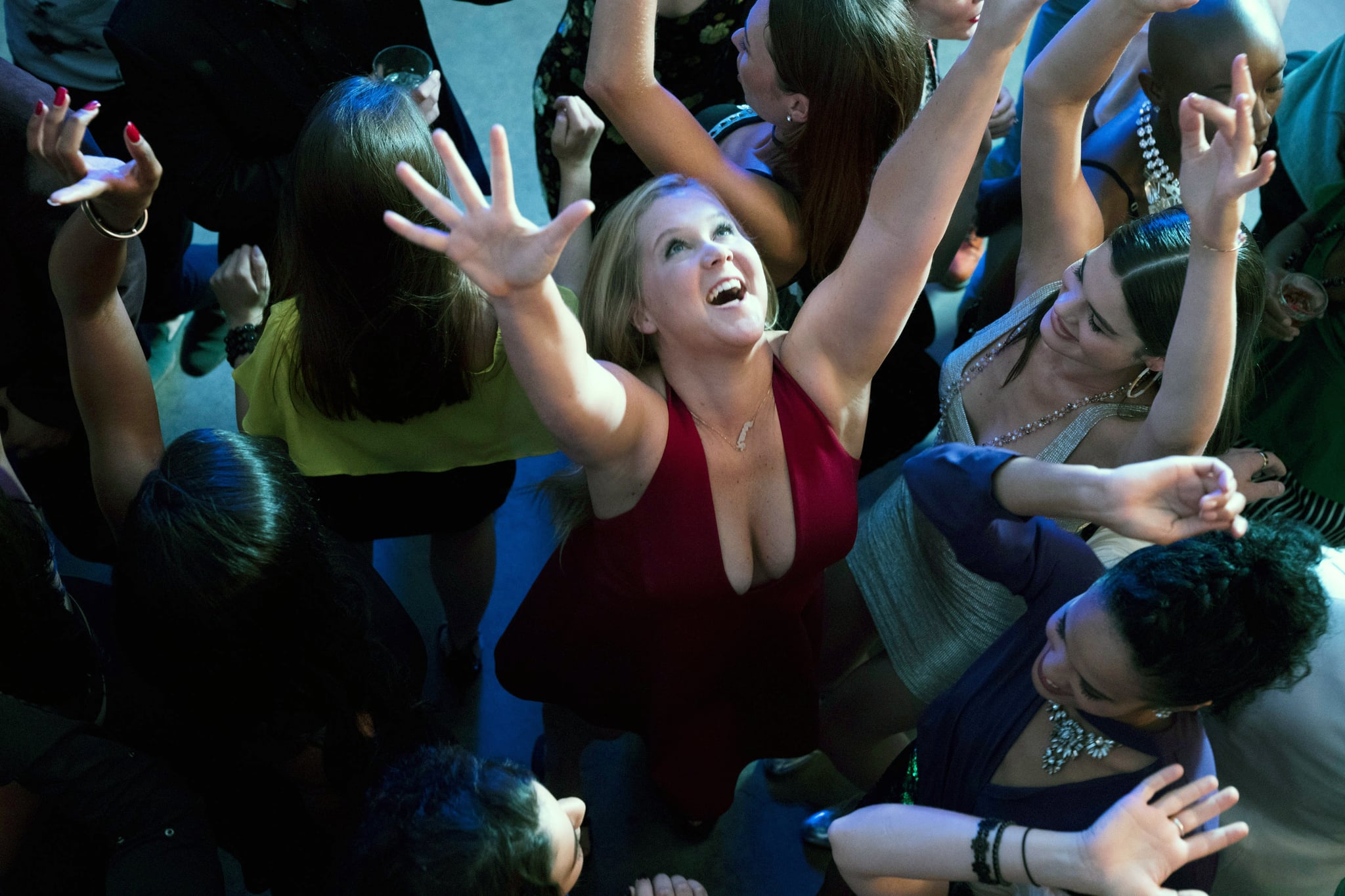 The movie, which Schumer told me is "a response to everything in my life, and all my friends' lives, and all the women I love," had plenty of input from the 36-year-old Snatched star. In fact, the scene of Renee looking in the mirror was something she specifically wanted to add into the script based on her own experiences.

"I pulled from the moments in my life where I felt the most invisible."

"I've been wanting to sort of communicate with this movie's messages for as long as I can remember," she said. "That was an addition I made that was really important to me to set the tone for what this movie was gonna be . . . I pulled from the moments in my life where I felt the most invisible, and the most . . . almost like you're disappointed with yourself. I just let myself live out that real vulnerable stuff. It was so important to the movie to try to capture one of those moments, and to remember the moments in my life when I felt that way."

Although there's a seriously cute romance threaded throughout I Feel Pretty, much of the story is devoted to Renee's career ambitions. She rises from the depths of a dingy remote office of a major beauty company to working behind the desk in its flashy Manhattan headquarters, where she strikes up a friendship with the company's massively successful CEO, Avery LeClair (Michelle Williams, whose exceptional performance is one of the film's highlights).

Related:
Have a Big Fat Crush on I Feel Pretty's Rory Scovel? Here's Where You've Seen Him Before

When I asked her if being surrounded by similarly strong women on set — in the form of costars like Williams, Busy Philipps, and Aidy Bryant, as well as cowriter and codirector Abby Kohn — influenced her performance or even just made filming easier, she said she "didn't really notice" and felt lucky because of it.

"I feel like everything I've worked on, there have been strong women around at the helm," Schumer explained. "In the moment, it didn't feel like a novelty at all. It's just sort of the way that I hope everything goes. . . . It just felt normal. I've been blessed because I've had the luxury of having mostly women around."

Despite the early backlash from the misleading trailer, I Feel Pretty is just as pro-woman as is, no matter what you've read on Twitter (in fact, she jokes that she hopes the whole situation "winds up just being a round of free press"). It might stumble a few times (particularly in its big, TED Talk-lite finish and the fact that the logic of her magic new "beauty" doesn't always make sense), but ultimately all I Feel Pretty wants to do is make you feel better about yourself. That might seem like a simple goal, but anyone who's looked at themselves in the mirror the way Renee does that first time knows better.