It's midafternoon on the suburban London set of Avengers: Age of Ultron, inside a gleaming soundstage that's been transformed into Tony Stark's sleek, new, modern-art-studded living room. Chris Hemsworth's stunt double — who looks very much like the blond, chiseled actor until his wig flies off mid fight scene and makes the entire crew erupt in laughter — is working out some last-minute kinks ahead of shooting. 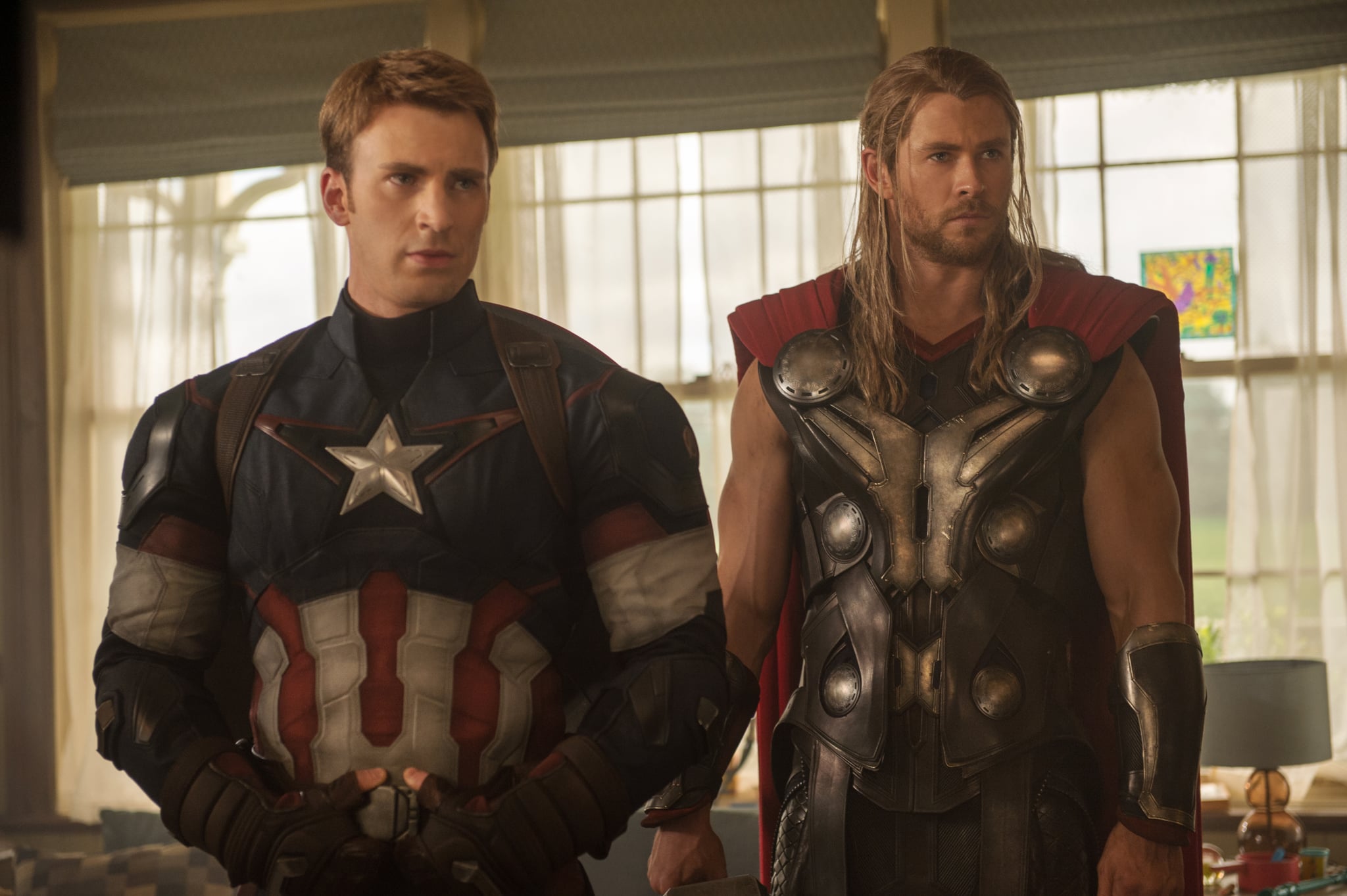 Before Hemsworth himself swaps places with him and films his battle against Paul Bettany's character, The Vision, he takes a moment to sit down with a group of reporters to talk about the Marvel sequel. Bettany is just one of several newcomers to the Avengers universe, and Chris tells us the new blood has reinvigorated the cast. "It shakes things up. This new cast, all of a sudden, breaks the familiar rhythm that we may have and makes it a bit more unpredictable." It's June, and while many of his costars have spent the last few months shooting around the globe, London is Hemsworth's first location on the film. "My wife and I were having a baby — or two babies! — at the beginning of the shoot, so we were in LA." Although Hemsworth is decked out in Thor's red cape and armor, one reporter asks if we see a more casual side to the character in this film, maybe on a date to the movies with Jane, for example. The actor laughs. "Yeah, I pitched that! But no." Jokes aside, Hemsworth did reveal that the Thor we see in this film isn't quite the same superhero he once was. Read on for more from Hemsworth on the new installment in the Marvel saga, and catch up on more behind-the-scenes stories from the set of the film.

On How Thor Will Tie Into the Avengers Team

"We put up with Thor having stayed on Earth from Thor 2. So he's here. He's part of the team. This is his home for the moment. The initial kind of threat — attack — from Ultron is personal, because it's at all the Avengers, and Thor then begins to see a bigger picture here about what this threat could be, potentially. And it begins to kind of tie in all of our films. It's hard to say too much without talking about what I can't talk about, but as I said, it's a personal loss [for Thor] from the get-go."

On Thor Getting Accustomed to Modern, Mortal Life

"[There's a] party scene, and I was in a nice coat and jeans, and the guys just kept joking, 'When did Thor go shopping? Did he buy this online? Or did Jane do it?' You don't see him go shopping, but the question's raised, because he's not dressed in his own guardian attire. He's more human in the film definitely. Thor has loosened up a bit. I think we lost some of the humor and the naiveté and fish-out-of-water quality of Thor from the first film into the second one. And there were things I loved about what we did in the second one too, tonally, but you know that sense of fun? I would have liked it to be there a bit more. And Joss [Whedon], I think, felt the same way. So there's more humor in Thor. He's off Asgard now, so he doesn't have to be as regal and kingly as he is in that world, which is nice. I enjoy that more. It's sort of a box, which he gets to step out of, on Asgard. That stuff just looks out of place, whereas here you can have a gag with the guys and he can throw away lines and be in a party scene with them in civilian clothes, which is nice."

On Whether He Misses Tom Hiddleston

"I love working with Tom, and it was great in the first [Thor] having such a personal kind of attachment to the villain. But I wouldn't have wanted to repeat that, either, you know? It's nice to just do something different. Not out of any lack of interest with the character or with Tom, but it was just, 'Alright, what's the next step?'"

On His First Time Reading the Age of Ultron Script

"It was awesome. I mean . . . coming off of Thor 2 and Avengers, you know, I couldn't wait to read this. And I just loved how it upped it in a way that wasn't just bigger and flashier. Everything had been amplified, but in an intelligent way. All the stories are relevant to what's going on in the world, as far as the exponential growth of technology, and artificial intelligence, and the questions of good vs. bad, and the AI world. And you know [it's] obviously heavily influenced by that time and that debate. [Joss] managed to bring all of the Avengers back in and give them a relevant reason to be there and justified conflict. It's a tricky balance. I'm glad I'm not the one writing the thing and having to pull that off. There's a new threat in this. There's a new conflict. There's a new set of circumstances. They don't tend to cover too much of the previous and the next one. This, hopefully, will stand alone as its own story."

"I have asked the question, but the truth is, no one has the answer yet. We don't know how it's going to end and the biggest concern is this one here — more so than two or three films [ahead]. I know that I'm sure they are coming up with ideas and attempting to kind of have some kind of arrangement that, five or six years down the track, they go, 'OK, this is where we're heading.' But they don't tell us until the day before usually. Like, this fight scene we learned this morning!"

TV
20 WandaVision Finds So Cool, Even Agatha Harkness Can’t Ruin Them
by Anvita Reddy 14 hours ago

Netflix
March Means One Thing For Netflix Fans: More Movies and TV Shows Are Leaving
by Grayson Gilcrease 21 hours ago