Chris Pratt is totally OK with the fact that you've probably never heard of Peter Quill (aka Star-Lord), his character from the upcoming Marvel film Guardians of the Galaxy. But be warned: he's ready to blow your mind, and not just with his rock-solid abs, as seen in the trailer. I was invited out to London with a few reporters last year to scope out the film set and get some insight from the cast, and Pratt — clad in his nearly skin-tight costume — was happy to chat about his extreme physical transformation, why Guardians of the Galaxy is going to be "better than Star Wars," and why this might be the funniest Marvel movie of all time. Read up, and prepare for the movie's Aug. 1 release! 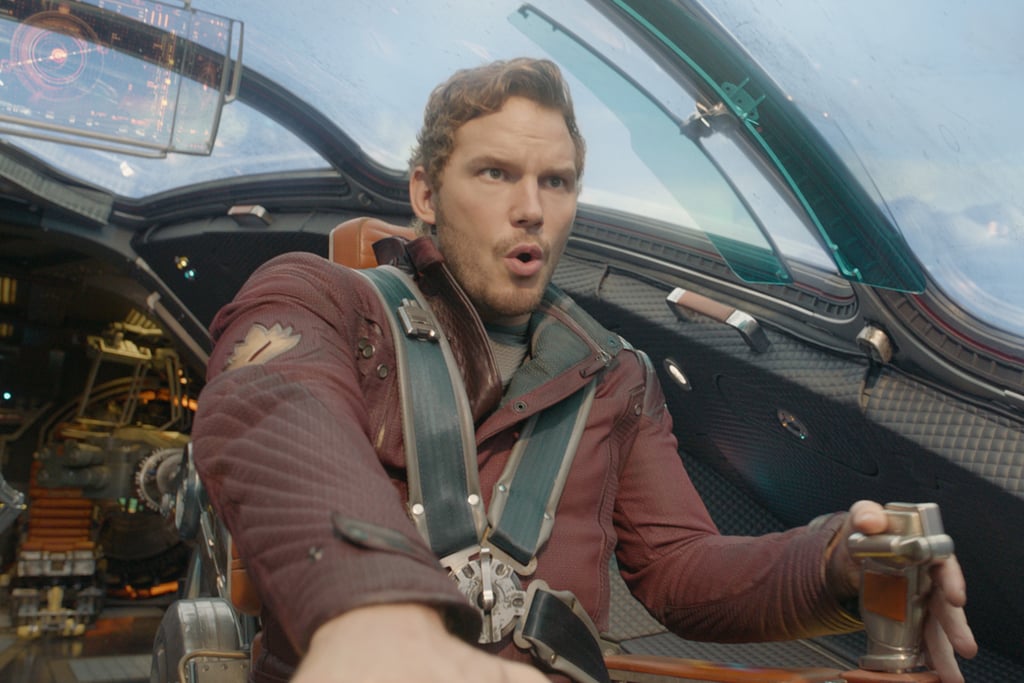 As opposed to a lot of superheroes who have their own films, Star-Lord isn't necessarily a name people are familiar with. Is that something you're worried about?

Chris Pratt: I don't want to give away too much, but you see why he's called Star-Lord in this movie. I think it probably is helpful that people don't know who he is because it would be my intention to want to make this my own anyways. But I feel like that's something that Robert Downey Jr. did with Iron Man, he kind of came in and . . . he is Tony Stark. And he kind of is in real life now, because he can probably afford weapon systems. The guy could probably seriously build his own suit now, with all the money he's making. The first Star Wars didn't have that problem with expectations because it was all brand new; you just take it for what it is. So basically what I'm saying is, we'll be better than Star Wars.

Was it awesome to get to play with all the intergalactic stuff?

CP: That's definitely part of it. The props, the costumes, the mask, the guns, everything that distracts a viewer's attention from me, I invite. Just in case I f*ck it up, please just look at the cool guns.

What was it like the first time you got your (gun) blaster?

CP: At the time, all I was worried about was, "I want to send them pictures of me holding this gun and they're going to think I'm too fat and fire me." I was like still very much in the process of losing weight, so I was like sucking it in, holding the gun. My wife [Anna Faris] was like, "You look uncomfortable in this photo." I am! I sent them the photo and immediately after, they were like "Hey, by the way, we need to get your sizes again." And I was like "I know, I know."

Can you talk about the physical transformation that you went through, losing some of the weight?

CP: There are a lot of elements that made it easy for me, like the costume and the hair and makeup and the props and the sets, and then working out and getting in good shape. I would just get out of hair and makeup and have my costume on and look at myself in the mirror and I would just not even see myself staring back, I would see like Peter Quill or this kind of Star-Lord character and think, "This is f*cking cool, man!"

Do you have a Guardians character — other than yourself — who you are a big fan of?

CP: Drax is awesome — not only the character, but Dave Bautista, the actor. I just really adore him so much and he's so unique. I think Rocket is a great character, and not just in a way that you would think. There's a lot of heart there and there's a sense of loneliness, this inner pain that Rocket feels — that hopefully the audience will empathize with — that makes him a really sympathetic character but also so badass because he's a raccoon with a machine gun. So that's good.

How have you been adjusting to the fact that you're dealing with two CGI characters, Rocket and Groot, throughout the entire film?

CP: It turns out it's kind of the same as it not being CGI. You're still kind of just standing there, looking at something and pretending, and saying the words. I think it would be a lot harder if we didn't have Sean Gunn [the stand-in] playing Rocket. I mean Groot doesn't have that much dialogue in the movie — I don't know if that's supposed to be a spoiler or not. Everyone knows that he says, "I am Groot," and that's it, [right]?

You and director James Gunn are both very funny guys. How important is comedy in Guardians of the Galaxy?

CP: Oh, super important. I think comedy is very, very important, especially in this film. If we pull this off right, it's going to be really hard for other movies to come out. They're gonna seem pretty unfunny compared to our movie. I think all the best, big adventure movies have good comedy, like all the Indiana Jones movies, Romancing the Stone . . . any type of movie where you have an adventure, potential budding sexual chemistry, and humor all together, it really works.

Do you get to improv at all in this?

CP: No, not really. This is not the place for that, I don't think. I do, though? I do, sometimes. It is probably not something that I should be doing, but I just sometimes can't help it.