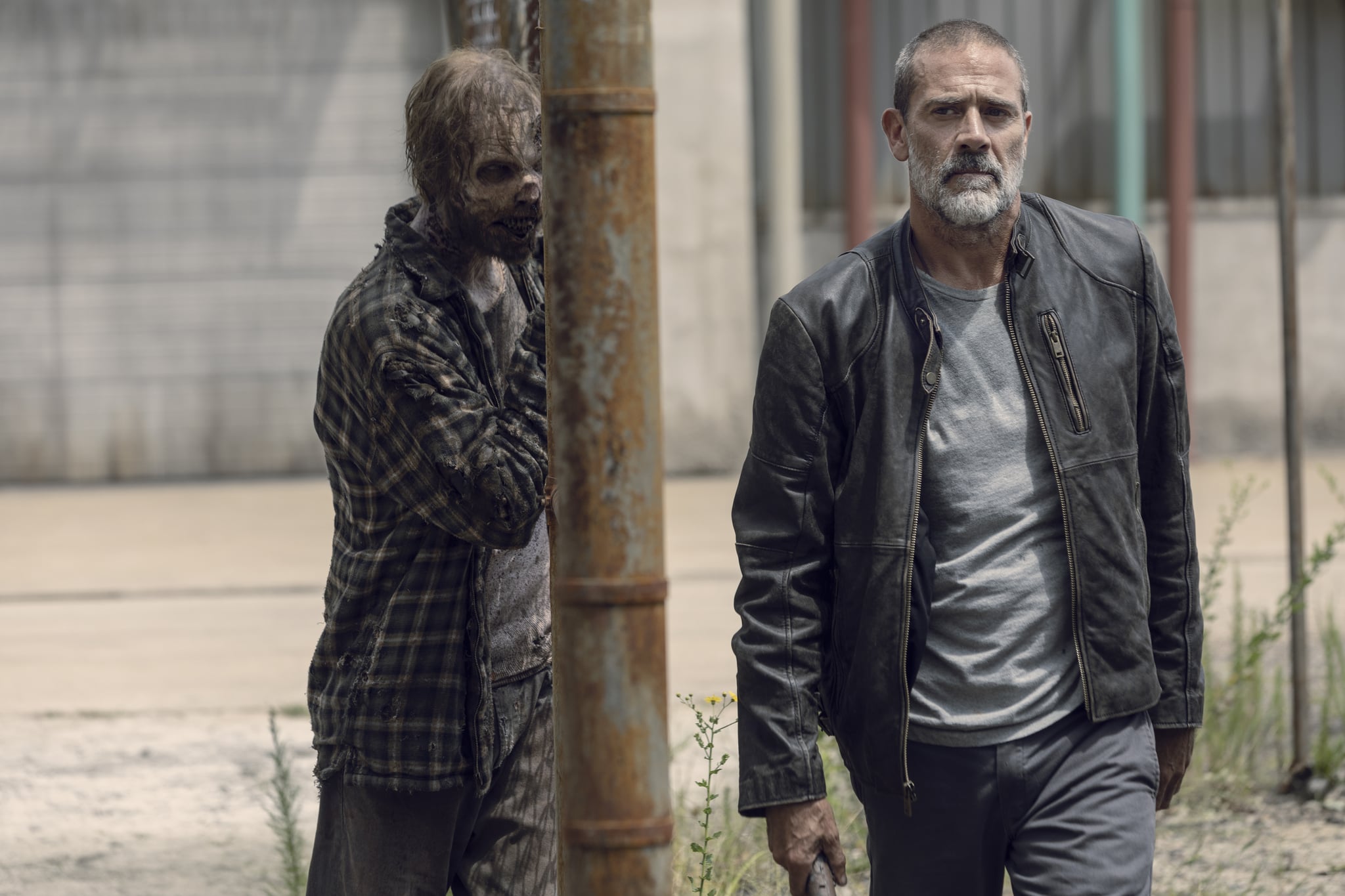 The Walking Dead managed to raise the living dead to star status with the introduction of Big Richie in the midseason premiere, "Adaptation." Twitter fans have come up with several theories on the identity of the walker who appears to have a special place in Negan's heart — namely, that the character is a metaphoric representation of Negan's demise. The former Savior leader must literally kill a demon from his past to make way for a brighter future.

Well, let's take theory to the next level: Negan thinks Big Richie is Rick. Consider it. The name "Richie" is ultimately a variant of "Rick." Maybe Negan is flashing back to his bitter relationship with our favorite Alexandrian. Remember, we as the audience know that Rick Grimes is alive, but everyone on the show thinks he's dead. Negan could very well believe Rick has transformed into a walker after the disastrous events at the bridge.

In the Talking Dead episode that followed "Adaptation," the actors make it quite clear that Negan hasn't seen a walker in six years. In my humble opinion, that's a huge hint that Negan may be projecting his emotions onto the walker — and who better to get a rise out of Negan than his nemesis, Rick? Many fans thought they could hear the walker hissing, "Negan." Another sign that our erstwhile Big Bad may be having a crisis of conscience or a break with reality that would make him consider Rick one of the undead.

This theory may be hard to reconcile with the dialogue that accompanies the first encounter between Big Richie and Negan, but consider those words carefully: "Big Richie, is that you? Look at you. Loyal to the end." We'd posit the loyalty that Negan speaks of here isn't like the fealty given to a leader long past his prime. He could mean that Rick was loyal to his bitter promise to destroy The Sanctuary and drag Negan into the light. 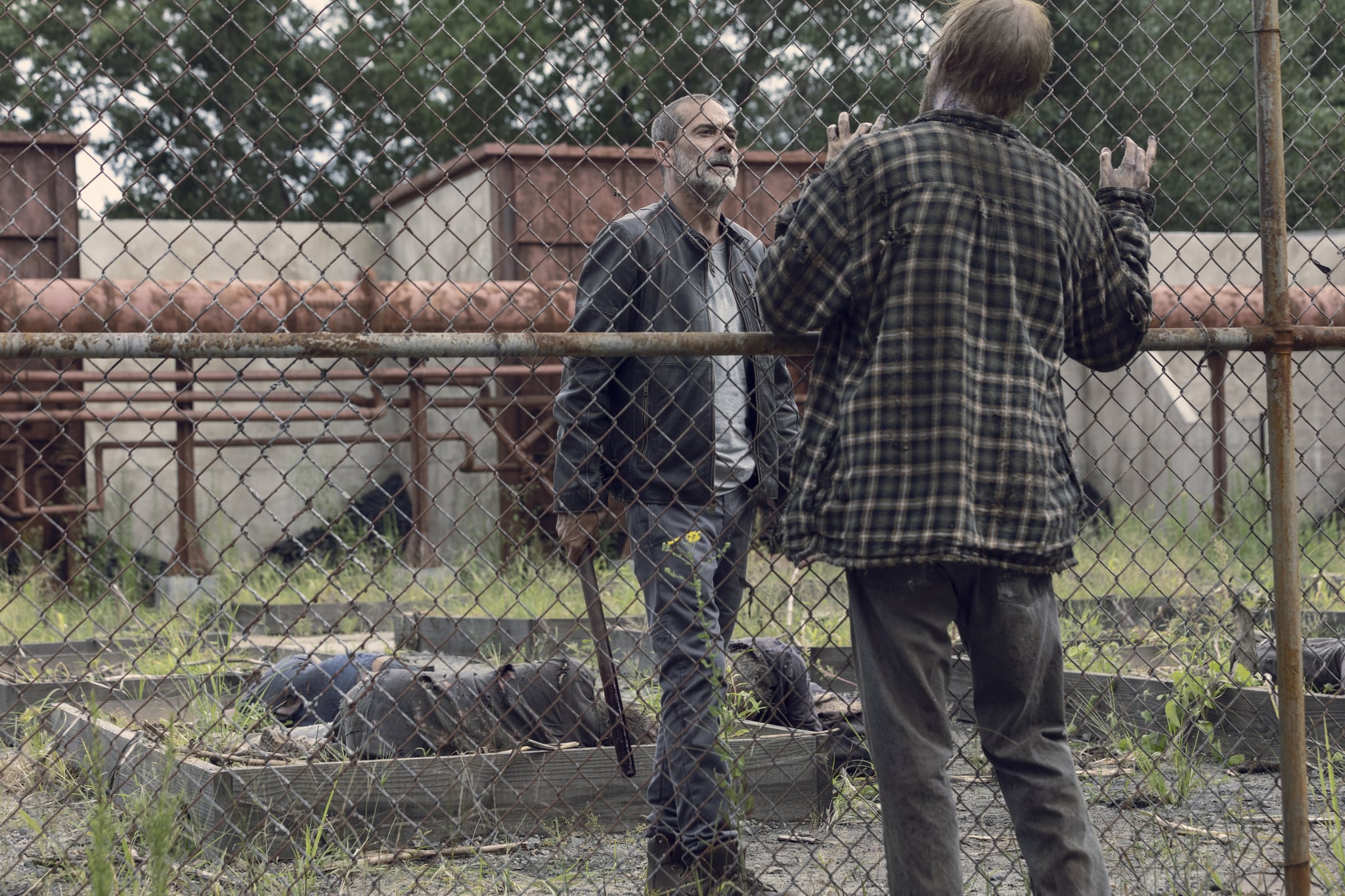 Think back to "The Bridge" (season nine, episode two) when Rick visits Negan in his cell to talk about an accident that occurred at the project site. Rick says, "It was a hard day. Hardest we've had in a while. A man lost his arm. The project is behind schedule. People were at each other's throats. Thing is, though — bad as it was — when the day was done, they came together. Not all of them. But enough. They chose to be together. You see what I'm getting at? No matter what happens. It's human nature to come together. That's just what we do . . . Building a future just like I said we would." That's Rick's commitment. He's loyal to his vision of a new Alexandria.

However, during that speech, Negan taunts Rick, saying, "When it finally goes to shit — and it will — you make sure you come back, and you tell me all about that day, too . . . You're not saving the world, Rick, you're just getting it ready for me." Harsh words. But they're from a man who still thinks he can land on top.

I believe the respect Negan pays to Big Richie hearkens back to this moment. Standing in the ruins of his former home, it is an acknowledgment that Rick's vision has triumphed. Alexandria is the future, and The Sanctuary is a broken relic of the past.

Even in the context of the current episode, this theory has merit because we get a subtle reminder of Rick's sacrifice at the bridge. If you recall, Daryl once believed Rick survived the blast and spent time searching for him. So when Daryl brings Jesus's body home following a brutal encounter with The Whisperers, he apologizes to Michonne for failing to bring Rick home too. Even Negan stops to pay a sinister homage to Rick by visiting the Grimes household in the wake of his jailbreak. Moments later, young Judith Grimes warns Negan to stay put because there's nothing out there for him. Classic foreshadowing. So naturally, the former sheriff should cross Negan's mind as he visits his old haunt.

A brief search of prior cast lists doesn't produce a character named Richard living among the Saviors, and the comics don't make mention of a parallel character. Couple those facts with the airtime and thematic significance given to this moment, and I'm compelled to accept this deeper meaning. Granted, the idea is a stretch, but the subtext of this interpretation gives Negan a profound but true-to-character (and succinct) full-circle moment regarding how to approach life after prison. He is now a man without a kingdom and without a rivalry, so he chooses to return to the people of Alexandria and (hopefully) start over from a different place. But whether he becomes a man who walks on a higher moral ground or reverts to the ruthless leader longing for Lucille by his side remains to be seen.