After 12 seasons of Grey's Anatomy, it seems like all our questions would be answered by now. But that's the beauty of this nighttime soap — it just keeps getting juicier and juicer, and we can always expect similar show fireworks to go off, especially in a season finale. As a result, we have questions for next week's finale. Big questions. Here are the major ones burning a Grey's-shaped hole in our hearts (a few not so burning but that still need answering). 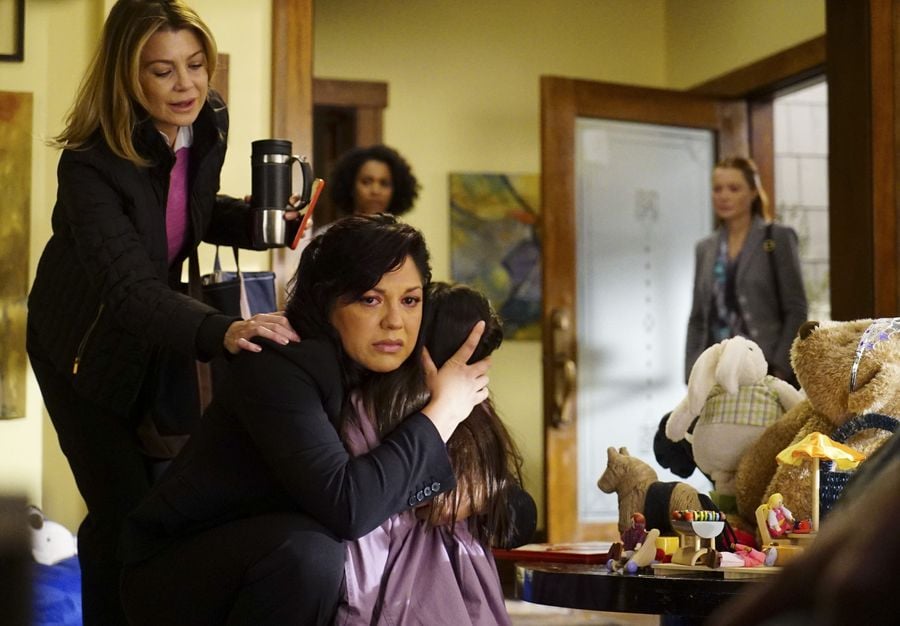 What does the future hold for Calzona?

Remember the good ol' days when Arizona and Callie were our favorite lovebirds? And then when they were our favorite divorced couple? After last week's heart-wrenching court battle and Arizona's ultimate custody win, things look murky for the duo. Here's what we better find out:

Is Arizona really fine with Callie's diminished role in Sophia's life? And — corollary to that — is Callie ready to just up and leave for the East Coast and leave her peeps behind, especially since she's only got Penny to keep her warm? (We hope not, by the way.)

Who is Meredith going to sex up?

Now that DeLuca is back on the market, will she start sniffing around the McDreamy look-alike? (And will this be something that gets in the way of her sisterhood pact with Maggie?)

Mer and Alex have been getting super close lately, and Jo is super hesitant to put a ring on it. Is there an opening for some possible best-friend hookups in the near future? Will Jo use her gun to make Meredith pay for stealing her man?

Who's going to the chapel?

ABC has been teasing an upcoming proposal. Will Amelia finally get her head out of her ass and just be with Owen already? Without making it super weird and awkward, per usual?

And please, for the love all things holy, please let the finale resolve April and Jackson's relationship. Are they going to get over themselves and be a happy family, or are we going to have to start an angry letter-writing campaign to Shondaland?

When's it going to happen for our all-time favorite commitment-phobes, Jo and Alex? That ring in the drawer isn't getting any younger.

Who's going to croak?

It's not really a question of if, but really of who. It's not our first time at the rodeo with Grey's. We know what's up, and it's a safe bet somebody is going to die, big time.

Is it going to be Kyle? He did leave it on a really sour note with Edwards last week, and knowing how the Rhimes universe functions, that would make for a bittersweet ending to his story.

Or will it be Edwards herself? The actress who plays Edwards, Jerrika Hinton, is slated to star in another Shondaland show, Toast. If the show gets picked up, Stephanie Edwards's fate may be sealed at Grey-Sloan.

Maybe it will be Penny. Please let it be Penny. At this point, she's just a liability, and she's just getting in the way of everything. Would it bring Calzona back together?

Ooooh . . . what if it is Ben, Dr. Bailey's husband? He's in so much crap right now. Is there really any way back for him?