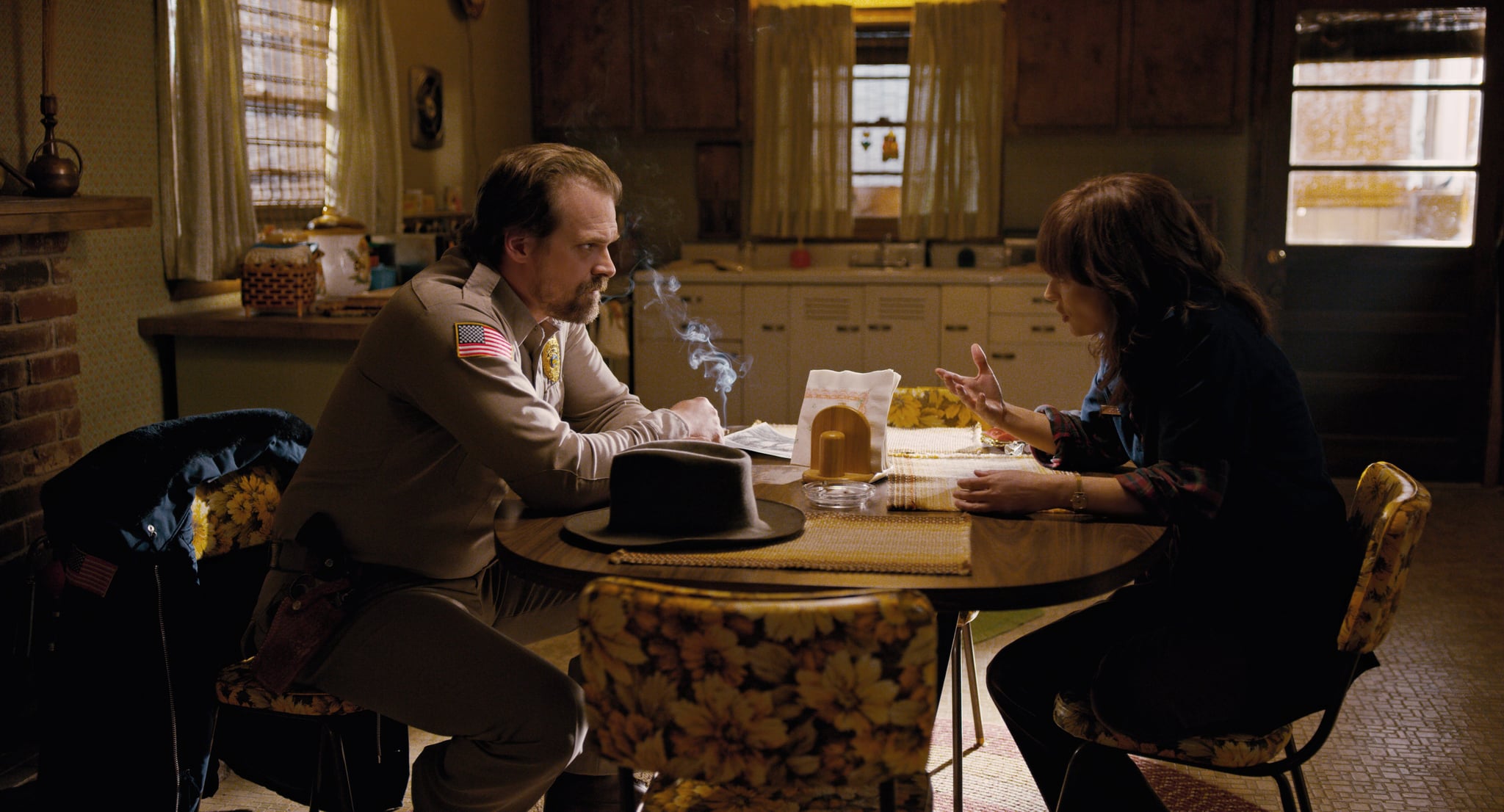 The full-length trailer to Stranger Things season three dropped recently, and with it came a ton of juicy snippets for fans to spend the next three months obsessing over. One of most noteworthy things for us was the quick shot of Sheriff Hopper (David Harbour) sitting in a fancy restaurant looking oh-so-dapper in a white suit jacket . . . then a quick cut to Joyce (Winona Ryder) sitting at home glumly picking at her dinner for one.

It's a great reminder that these two crazy kids deserve a little grown-up happiness — and maybe in season three they're going to get it.

If you'll recall, neither Hopper nor Joyce has had an easy go of it. They're both divorced, plus Joyce lost her boyfriend Bob (Sean Astin) last season (RIP, Bob — you died a hero's death) and Hopper tragically lost his daughter to cancer before the events of the show. The show did the characters a huge favor by making their relationship a slow burn; they got to rekindle their adolescent friendship, helping each other deal with some extremely intense and crazy stuff in the first two seasons. Which means it'll be that much sweeter when they finally admit they have feelings for each other. On top of that, Ryder and Harbour have great chemistry together. It would be a crime not to capitalize on that! And we aren't the only ones who think Joyce and Hopper should be together, though Harbour admits that season two wasn't quite the right time.

"The fans they call it like 'Jopper' or something, they all ship this relationship with Hopper and Joyce and I do too," Harbour said in an episode of Beyond Stranger Things, "because I feel like they're two really lonely, lost people that really need each other. I sort of have always seen their relationship kind of like Chinatown with Faye Dunaway and Jack Nicholson. So you know we talked even about at the end of [season two] I was like 'Can they get together in some way?' and we were like 'What's gonna happen? Bob's dead and she's upset and he like ushers her into the bedroom?' I mean he can't be that much of a jerk."

"The short answer is I do feel like the sex would be a lot better with Hopper than it is with Bob," Harbour concluded with a smile. It's a comment Harbour later revealed to Ryder during an interview with The Los Angeles Times, which elicited some disbelief from his costar. But in the same interview, Harbour says he thinks "Jopper" dated in high school and they have some "unfinished business." Ryder has remained mostly mum on the topic, but she does admit she has "ideas" about Jopper's backstory, though she just doesn't know how much she's allowed to say.

As far as season three specifically, it does sound like there will be a little movement on the Jopper front, even if it isn't yet a full-blown romance. At an Emmy event last year, Harbour teased for fans that season three is the "summer of love" in Hawkins, IN, and that while Hopper does have "his own issues with love," he is going to be "confronting some of those issues" in the new season.