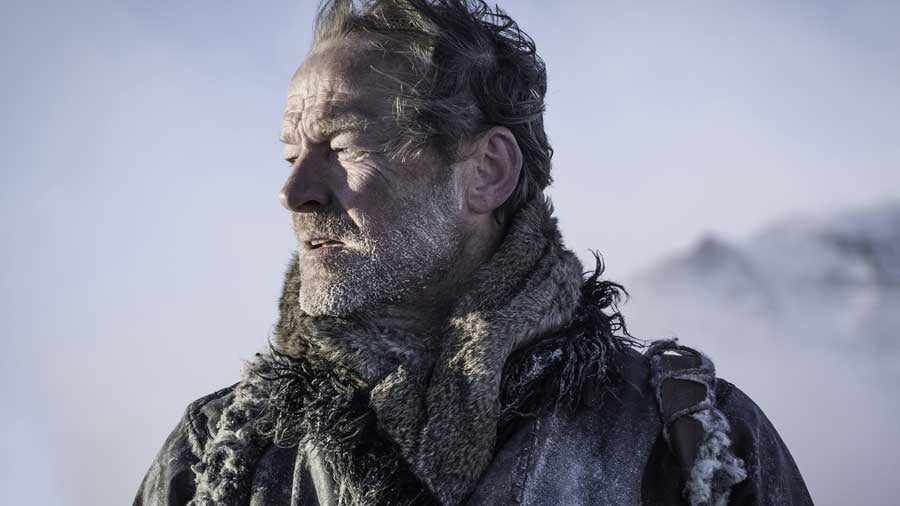 Game of Thrones has some incredibly satisfying one-on-one conversations in its latest episode, "Beyond the Wall," most of which take place (ahem) . . . beyond the wall. Among those is a touching scene between Jon Snow and Jorah Mormont wherein Jorah tells Jon he brought shame upon his house. In case you've forgotten, here's why Jorah is so ashamed of his past behavior.

Jorah was born on Bear Island as the son of Lord Jeor Mormont. He participated in Robert Baratheon's rebellion to take down Mad King Aerys and his son Rhaegar, for which he earned himself knighthood once Robert took the Iron Throne.

Jorah later became Lord of Bear Island when his father abdicated the position to voluntarily join the Night's Watch. Jorah married Lynesse Hightower of Oldtown after he won her affection in a tournament, but when she came to Bear Island, she found it cold, harsh, and primitive. She had expensive tastes and Jorah sought to satiate them, which led to him selling poachers into slavery to get more money.

Slavery is illegal in Westeros, which is why Jon says his father was going to behead Jorah as punishment for his crimes. But when Ned Stark pursued Jorah, he fled across the Narrow Sea to Lys with his wife, who eventually left him for someone with more money.

All of this brought great shame on House Mormont, though you can tell by Jeor's conversations with Jon Snow that the elder Mormont loved his son even after all the scandal. But Jorah's right — Jeor gave the sword Longclaw to Jon, and Jorah really has no right to it anymore.

Related:
Wait, Did Jorah Just Give Jon and Daenerys His Blessing?

The show really picked up with Jorah after he fled to the Free Cities. In season one, he meets up with Daenerys Targaryen in Vaes Dothrak at her wedding to Khal Drogo. He's there as a spy for Varys, but eventually comes to respect, admire, and love Daenerys, so he thwarts Robert's assassin and becomes Daenerys's faithful servant.

Related:
2 of the Funniest Game of Thrones Characters Are Officially Best Friends

When Daenerys finds out about Jorah's spying, she banishes him, but he eventually manages to work his way back into her good graces, and she is clearly happy to see that he managed to find a cure for the greyscale that afflicted him.

Many fans are shipping Dany and Jon, but there is also a fairly strong contingent of Dorah fans out there. Perhaps once everyone on the show learns that Jon is Dany's nephew, she'll end up with the formerly disgraced Lord of Bear Island.

TV
We Can't Wait to See Javicia Leslie's Batwoman Suit in Action: "[It's] Her Moment!"
by Grayson Gilcrease 1 hour ago

HBO
The Undoing's First Season Is Short and Sweet, So It Won't Be Long Until the Killer Is Revealed
by Monica Sisavat 3 hours ago