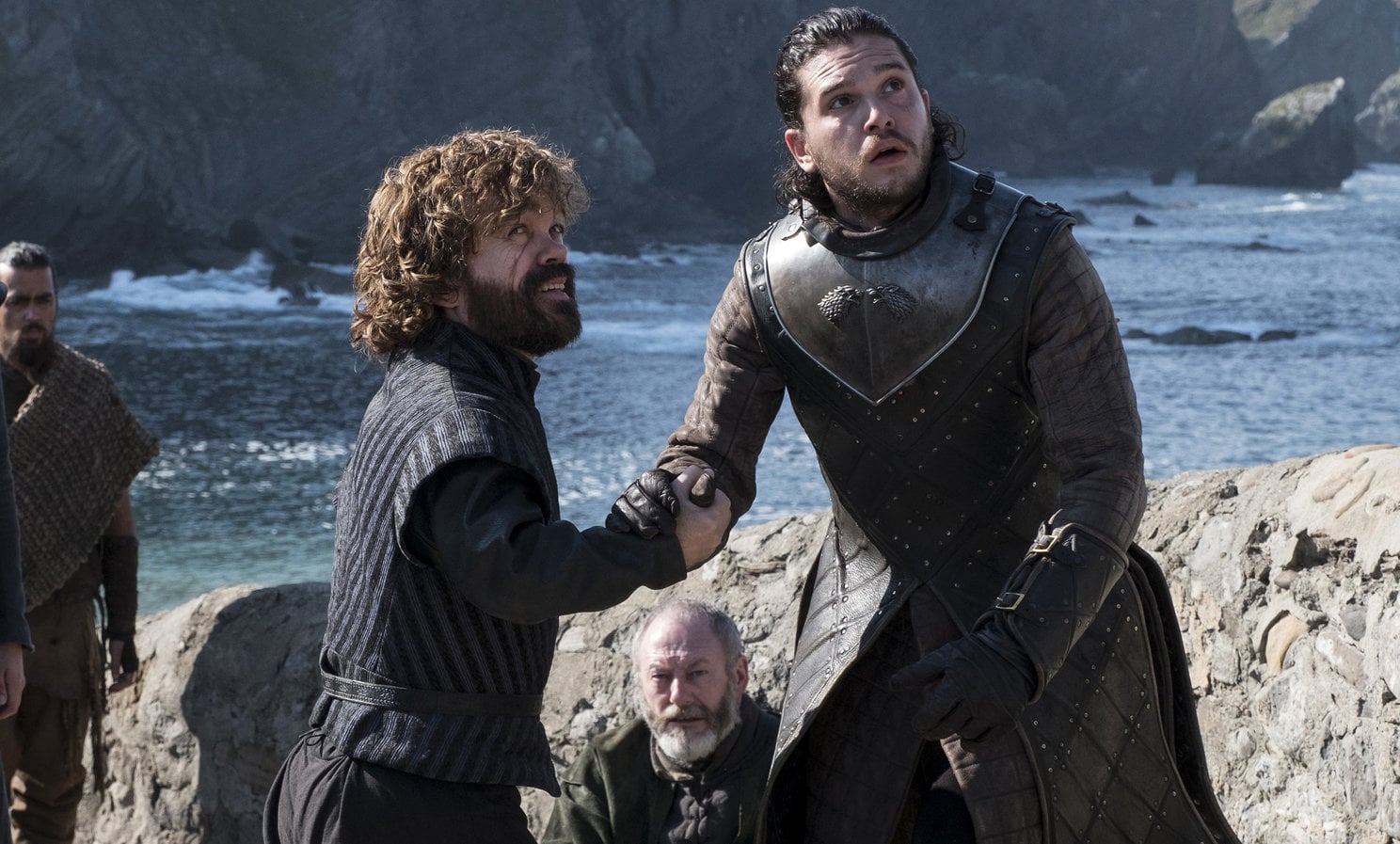 A peculiar group has been gathering at Dragonstone on Game of Thrones. After dispatching her girl power group in Daenerys's first big move toward taking the Iron Throne, the Mother of Dragons welcomes Jon Snow, King in the North, and his advisor, Ser Davos Seaworth, former right-hand man to Stannis Baratheon, to Dragonstone — which leads to a couple rather cheeky exchanges between Ser Davos and Tyrion Lannister.

"The Onion Knight," says Tyrion to Ser Davos upon meeting on the beach. "We fought on opposite sides at the Battle of Blackwater Bay."

"Unluckily for me," Davos responds.

Later, when Daenerys questions why she needs Jon Snow's help, Davos tells her it's not to win the Iron Throne.

"[You don't need us] to defeat Cersei. You could storm King's Landing tomorrow and the city would fall. Hell, we almost took it and we didn't even have dragons," says Davos.

"Almost," interjects Tyrion (and damn, can Peter Dinklage deliver the simplest of lines in the best way).

If you don't remember what they're referring to, let us take you back to season two, episode nine, "Blackwater."

Like a lot of Game of Thrones seasons, the action of season two climaxes in a terrific battle that takes over almost an entire episode. "Blackwater" sees Stannis Baratheon's forces trying to take King's Landing, led by Ser Davos, only to be thwarted by the Lannister army, largely thanks to Tyrion.

Related:
Theory Alert! Could Ser Davos Actually Be the Secret Hero on Game of Thrones?

Tyrion's master plan involves sending one lone, unmanned ship out into the bay, which he then lights on fire with an arrow shot from the shore by Bronn. It ignites wildfire, the insane green substance developed by the Alchemists' Guild that burns so hot water cannot put it out. This ship's explosion takes out several of Stannis's ships.

Then when the remaining forces storm the shore, Tyrion leads a group of men through a tunnel and takes the Baratheon fighters from behind. Aided by his father, Tywin Lannister, and his army, Tyrion and the Lannisters successfully defend King's Landing against Stannis and his army.

Tyrion takes a sword to the face during the fight, which is how he got the scars he still sports, while Stannis and Ser Davos narrowly escape back to Dragonstone after the crushing loss.

It's a little curious that Davos would be so flippant about the Battle of Blackwater, since it is where he lost his son, Matthos. But we suppose it did happen five years ago, so perhaps he has moved on — or he does not want to make an enemy of Tyrion Lannister in the face of the North needing Daenerys's dragonglass to fight the White Walkers.