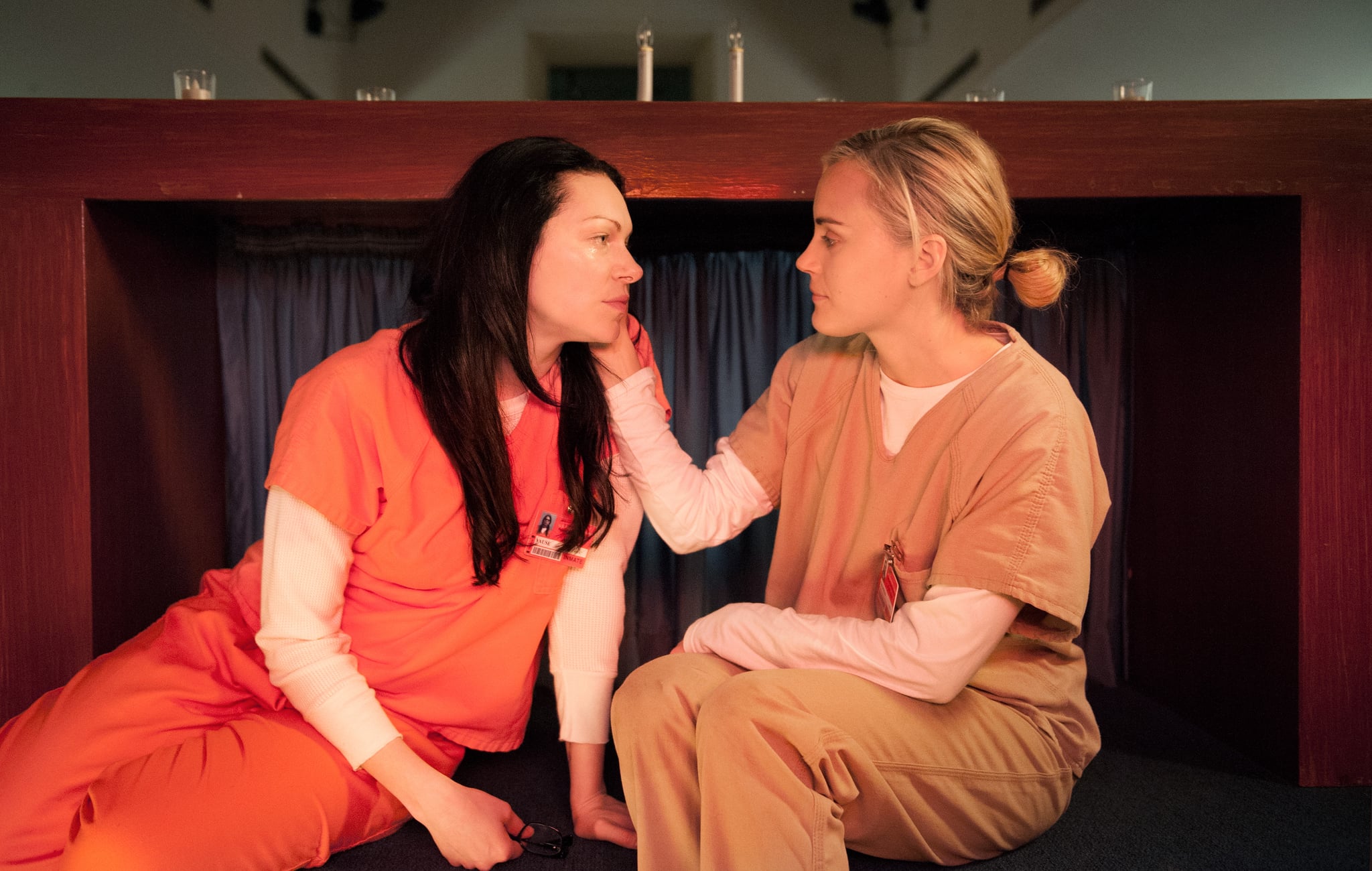 By now, you're likely aware that Orange Is the New Black is inspired by the real-life experiences of author/former prisoner Piper Kerman. But after five seasons (and with a sixth on the way), it shouldn't come as much of a surprise that most of the show's storylines are fabricated. (Some are literally fabricated, like black-market panties. Ha!) However, seeing that the story is inspired by truth, I wanted to find out just how accurate the show is from a former inmate — so I tracked one down. My interviewee requested that her name be withheld, so I'll just refer to her as the Former Inmate. At age 52, she served six months at a correctional facility in San Mateo, CA, in the '90s, as a result of several DUIs. She had some fascinating things to say, not to mention some really outrageous stories.

Former Inmate: I do want to say something from the onset, that I think the writers of Orange Is the New Black got right: a lot of people who go to jail, especially women, cry all night the first night. They do mention that on the show and I found that to be true.

POPSUGAR: Was that your personal experience too?

PS: Did you see anyone form romantic relationships in jail?

FI: Oh, yeah. In the shower. You see that a lot. Then a lot of those relationships go south and people have catfights. The worst thing that I heard, and I don't know if it's true or not, is that one girl bit the other girl's cl*t off. Some of those girls get bored. Quite frankly that's just it; they're bored silly. Now, I didn't see that they put the girls to work like they do on Orange Is the New Black, but maybe they do now.

PS: Was there anything in particular from the third season that you related to?

FI: It's true that in jail there is a pecking order. Some people, which I was surprised to hear, couldn't wait to get to prison because they felt county jail was beneath them. I thought that was odd, but for them, that was their wish. The other thing that I found interesting is that at that time, they release the women at midnight [when their sentence is complete]. Your name is up on a board with what day you're supposed to get out, but that day comes and goes, and you don't get out. Then you wait until the next night and you still don't get out. When you finally do get out, you're so happy. They let you out at midnight, it's dark, there's no transportation, and you're walking. I was approached by two or three people about coming to work for them as a prostitute.

PS: Just walking outside the jail?

FI: Yeah, walking to transportation. It was one of the most degrading things that has happened to me. Then you finally get in a cab, and you have to stop to get cash for the cab. Luckily I had an ATM card, but those kinds of things are difficult for even me, as an educated person, to execute. And if you're not educated, that's how they get you right back in the system — at least that's what I thought.

PS: Did you find out where you stood in the pecking system pretty quickly?

FI: Oh yeah, they tell you. I mean they don't tell you where you stand, but you can figure it out. The worst crimes are supposedly the best; it's just weird. It was just strange. But looking at it, that's one of their coping mechanisms. The other thing that happened to me is that you got two or three days where you could go off and be with your family, but I found that it was better for me to just stay there. For my family anyway, it was too disruptive. Of course, it was also disruptive for me. It was easier to stay there and do your time and get it over with.

PS: When they give you three days to go visit your family, do those three days get tacked on to the end of your sentence?

FI: No, that's all part of the deal. I'm not sure how that works. Just like on the show, they pretty much can set what they want to do on their time frame, not yours. You learn a lot of patience. There's no talking back because if you do there's punishment.

PS: Was there a solitary confinement there?

FI: I think so, but I'm not sure, and I never saw it. The inside of the place hadn't been painted in a long time so I finally got a couple girls and we said we'd paint it over the weekend if they supplied us with the paint. The living conditions were unbelievably appalling. Certainly not as clean as they are on Orange Is the New Black. People who come in to visit don't see that side of it at all.

PS: Did your family come visit you while you were there?

FI: No. I asked them not to. I didn't feel that that was a place to have a visit, but that was my choice.

PS: Do you think that the show truthfully portrays the way the guards treat the inmates?

FI: They do a fairly good job. There were some guards who were sympathetic and nice. I remember one girl, and she was in there for quite a long time although I don't remember for what, but they gave her a TV. She and I watched some show, and that was a nice thing for them to do. We never told anybody, and they never told anybody. We were supposedly in there for a meeting.

PS: One thing I think about when I watch the show is the amount of stuff they have stashed all over the prison. Is that accurate?

FI: I didn't see any of that. The thing of it is, you go in there and you're stripped of everything. Part of that stuff is just what it is: just stuff. You don't have anything.

PS: Did you ever see any fights break out or violence between the inmates?

FI: I think there was one in the shower but I never did see it. I tried to stay away from stuff like that. Before I got married I was a flight attendant, and in that particular job I learned how to keep my personal thoughts to myself. There's no sense in getting overexcited or involved in stuff that you have no business in, so I just stayed out of it.

PS: I know this is a strange segue, but how was the food?

FI: It was decent. I don't have any complaints one way or another. I think one thing Orange Is the New Black has done, is that it has opened up women's prison to a bigger audience. I think it's wonderful how that transgendered woman [Laverne Cox] is getting the respect and publicity that she's getting because they need more of that. And I think it's opened up some eyes to what happens in women's prisons.