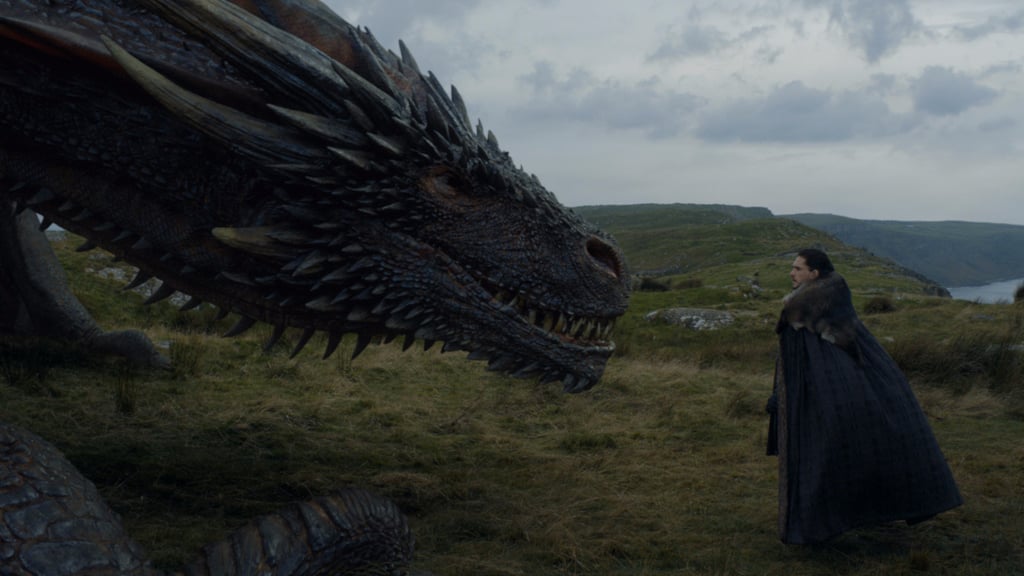 It happened: Jon Snow came face to face with one of Daenerys Targaryen's dragons on Game of Thrones, and the internet couldn't handle it. After consistent buildup throughout the series that Jon Snow is, in fact, a Targaryen, the true sign of it all came as the King of the North went face-to-face with Drogon, Daenerys's largest dragon, after they returned from a bloody, smoky attack on the Lannisters. Although Jon immediately dropped to the ground after Drogon flew over him in "The Queen's Justice," this was the first time the two interacted with one another, and it immediately gave us chills.

With Drogon just inches away from Jon, we knew this could go in two totally opposite directions: the dragon could've opened his mouth and erased Jon with a breath of fire, or it would be an emotional exchange that would give everyone goosebumps. Well, it was the latter, and the connection between Jon and Drogon is fierce. Jon comes insanely close to Drogon and rubs the dragon in an awestruck, holy f*ck kind of way. Our goosebumps pretty much turned into dragon scales. Will Jon be one of the "three heads" to ride a dragon? Only time will tell, but for now, check out some of the most spot-on reactions to Jon meeting the dragon, then prepare to freak out over next week's episode — we can't wait!