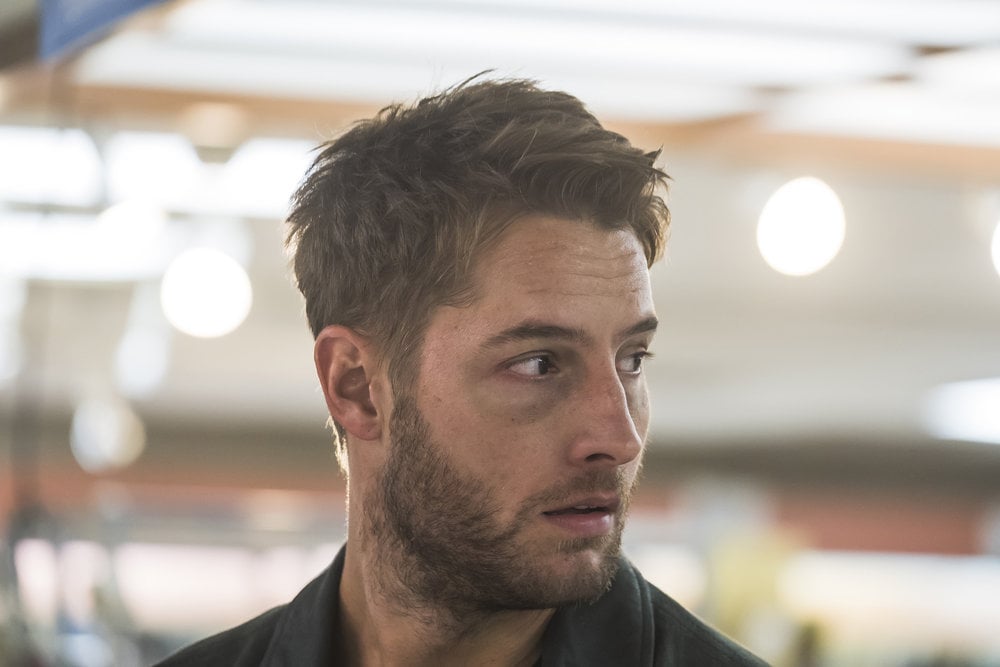 Kevin Pearson, what are you doing to us?! This Is Us fans painfully watched the first of the Big Three unravel into a life of addiction and substance abuse during this month's episode, "Number One." As someone who would leave my future husband for Justin Hartley with his character's captivating smile and charming ways, this was truly difficult to watch. We got our first look at Kevin's career-ending knee injury during his senior year of high school juxtaposed with present-day Kevin battling the demons of addiction.

It's ironic to watch Kevin snark at his father reciting the AA serenity prayer in their family kitchen, having no idea that years later, he too would fall to his knees and cry for help. Well, what brought about that cry for help is just . . . a lot. After going back to his high school to give a less-than-flattering speech as an honored alumni, he picks up another alumna in an embarrassing cheap-red-wine-induced stupor, and his addiction to painkillers is exposed like we've never seen before.

Related:
Even the This Is Us Cast Couldn't Handle Kevin's Heartbreaking Episode

Kevin snoops around in Dr. Charlotte Everly's home after asking her to make some food, and what do you know? He finds her prescription pad. To see Kevin looking for some sort of vice so anxiously solidifies the fact that, no, he's not growing his beard out for a movie — he is simply losing himself to his addiction.

Although Kevin ends up leaving the pharmacy frantically when he realizes he lost his dad's pendant, we see what he wrote down on that prescription pad, and it's bad. Kevin writes himself a prescription for fentanyl, the incredibly addictive and sometimes fatal opiate drug that's 50 to 100 times stronger than morphine and part of the cause of the nationwide opioid epidemic.

I have an observation. One pill at this dosage would probably kill Kevin. Fentanyl is dosed in mcg, not mg. The Rx should also say 1 sublingual tab Q6h. I'm betting any pharmacist would recognize this Rx as fraudulent. That said, even 40mcg could have a devastating effect if not opioid tolerant. from thisisus

After a closer look, Reddit user lrebs19 explained that one dose of the medication he wrote himself a prescription for could kill him. Not only that, but he wrote the prescription with two refills, and according to the comments, refills for this drug are typically never given. We knew Kevin was taking Vicodin heavily, but this deadly drug is a big step, and one that could've costed him his life. The Redditor called out that fentanyl is typically "dosed in mcg, not mg," seen above.

"I'm a pharmacist and I thought it was absurd the writers chose fentanyl," another user wrote. "Oxycodone would have been way more realistic."

In addition to the dosage and refills, there are other telling signs that this is a fraudulent prescription, including the date, the weird way he wrote MD after Charlotte's "signature," and obviously, there was no record of the prescription in the database.

We can't help but call it a sign from Jack that he didn't go through with filling, or at least trying to fill, that prescription, because the results could've been devastating. We have no idea what is going to happen with Kevin, but we hope the Big Three can come together and pull him out of this deep hole he's in.

Netflix
Where Is Selena's Husband Chris Pérez Now?
by Camila Barbeito 13 hours ago

Netflix
How Selena's Family Was Involved in the Production of Netflix's Selena: The Series
by Camila Barbeito 15 hours ago

Matthew Perry
Matthew Perry Just Dropped a Chandler Bing Merch Collection — Could This BE Any More Amazing?
by Yerin Kim 16 hours ago

Star Wars
ICYMI, This Is What Moff Gideon Really Wants From Baby Yoda on The Mandalorian
by Amanda Prahl 17 hours ago