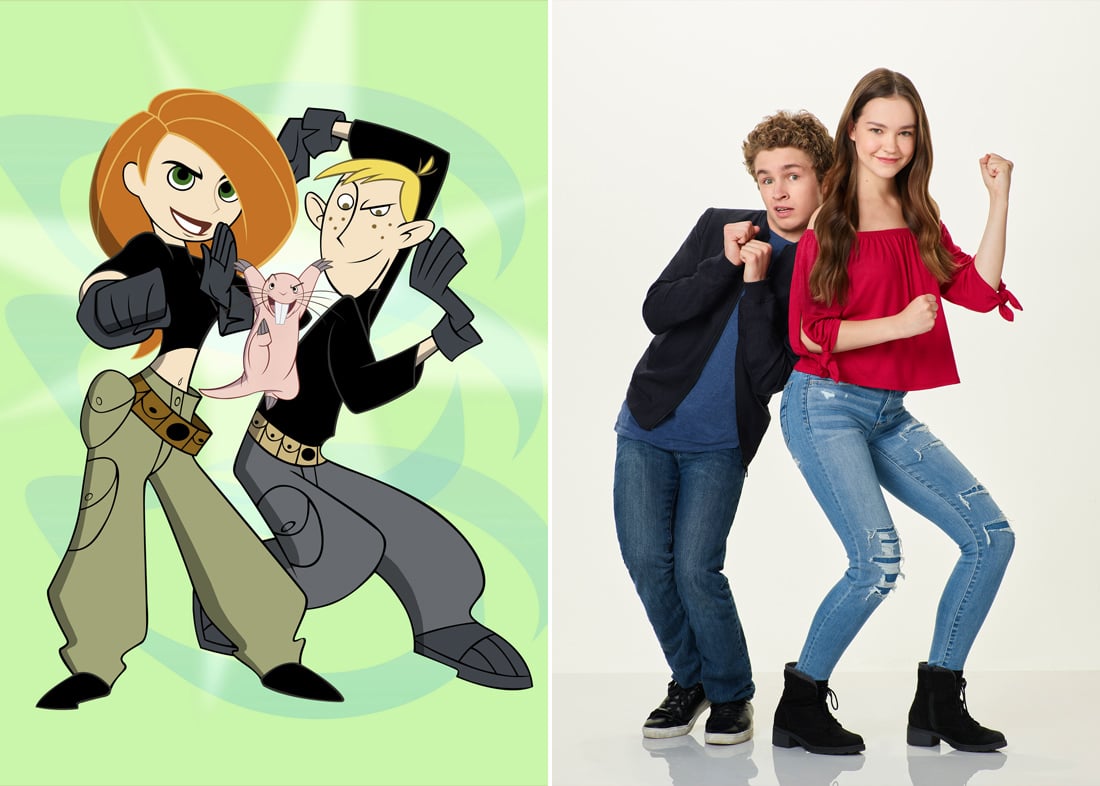 With all the TV reboots coming down the pike in 2018, it was only a matter of time before beloved Disney Channel shows started getting the same treatment. Just like the recent revival of That's So Raven, Kim Possible is also being brought back but with a fun twist.

The animated series about a young high-school cheerleader who lives a double life as a spy saving the world from supervillains is being turned into a live-action movie with newcomer Sadie Stanley as the title character. The Goldbergs star Sean Giambrone will play her trusty sidekick Ron Stoppable.

At San Diego Comic-Con on July 21, executive producers Mark McCorkle and Bob Schooley shared a first look at the movie, which will premiere in 2019. In the quick clip shared by the Disney Channel, the spunky animated character is shown evolving through the years, ending with a shot of Stanley all suited up as Kim.

From the animated world to live-action – the first look at Sadie Stanley as the iconic character Kim Possible debuted today at @Comic_Con by #KimPossible creators & exec producers @bob_schooley & @ridiculousmark. The Disney Channel Original Movie will premiere in 2019. #SDCC2018 pic.twitter.com/WFUjLvW2Fy

Alyson Hannigan (How I Met Your Mother), Connie Ray (The Big C), Todd Stashwick (The Originals), Taylor Ortega, Erika Tham, and Ciara Wilson will also star in the movie as Dr. Ann Possible, Nana Possible, Dr. Drakken, Shego, Bonnie, and a new student named Athena, respectively. Hopefully the producers figure out some way to work Rufus into everything as well, even if it's live-action.

Kim Possible premiered on the Disney Channel back in 2002 and had a successful 87-episode run that included an Emmy nomination for outstanding animated program. And who could forget the two Disney Channel original movies it spawned, Kim Possible Movie: So the Drama and Kim Possible: A Sitch in Time? Definitely not me, considering I've had the same Kim Possible text alert since I was in ninth grade (yes, really). The script is being handled by series creators Mark McCorkle and Robert Schooley and will be codirected and coproduced by Adam B. Stein and Zach Lipovsky. The movie is expected to go into production this Summer with a release date sometime in 2019.

"Mark and Bob created an enduring character, and kids all over the world found a friend in her, an average girl who just happens to spend her off-school hours thwarting evil villains," said Disney executive Adam Bonnett in a statement. "Although Kim Possible 'can do anything,' kids and tweens found that this animated redhead was just like them. As we embark on the fun challenge of making Kim and Ron fully dimensional, I'm thrilled to be working again with Mark and Bob and to welcome the addition of a dynamic creative team – Josh, Zanne, Adam, and Zach – into a world where anything is indeed possible."

At the very least, now we all have a reason to dust off our Kim Possible Halloween costumes this year.