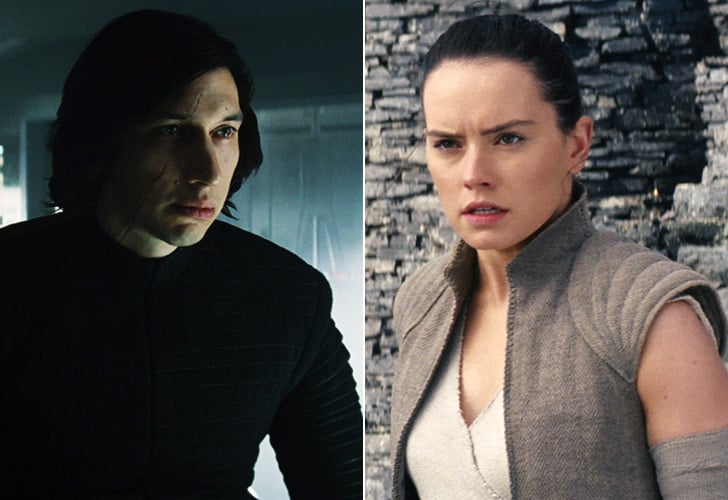 Potentially incestuous spoilers from Star Wars: The Last Jedi below!

OK, in all seriousness, the bond between the faces of the opposing sides of the galactic war — Republic Jedi-in-training Rey (Daisy Ridley) and the First Order's resident tantrum thrower, Kylo Ren (Adam Driver) — is on display more than ever in the second installment of the recent trilogy. Although we don't get too many answers about the nature of what exactly is happening between them, we do see that there's definitely something there. The funny thing is, the pair actually spends most of the film apart.

While Rey is struggling to learn the ways of the Force and more about her own childhood on Luke Skywalker's remote island of Ahch-To, Kylo is stalking around Starkiller base feeling conflicted about his service to Supreme Leader Snoke. Their mirrored states of unease makes it all too easy for Snoke — a clever, maniacal humanoid villain dead set on turning Rey to the Dark Side — to open up a connection between the two. Rey and Kylo begin to have visions of each other despite their large physical separation, whether they want to or not (including one moment when Kylo is shirtless, which Rey is not pleased with) (or is she too pleased with it?!) (#TeamReylo).

Related:
The Heartbreaking Significance of Those Gold Dice in Star Wars: The Last Jedi

When they finally meet up later in the film, the tension between them — sexual or otherwise — is palpable.

Their chats evolve into meaningful discussions about the nature of their relationship with the Force, their parents, and whether or not they belong to the Light or the Dark. When they finally meet up later in the film, the tension between them — sexual or otherwise — is palpable. For anyone who watches The Last Jedi and suddenly, uncomfortably, finds themselves on Team Reylo, but can't dispel the nagging worry that, hey, there's a chance Rey and Kylo are related, you've come to the right place. Do they share a blood line, or nah?

TL;DR, nobody knows for sure.

The answer to that question all comes down to the identity of Rey's real parents. Her mom and dad are actually a big part of her and Kylo's conversations, and Kylo claims to have seen who they really are in a vision. He first tells her that because of who her parents are, he knows she'll eventually turn to the Dark side to serve beside him. Later on, he confronts a sobbing Rey about her parents again, telling her they were nobodies, just Jakku scavengers buried "in pauper's graves."

To be honest, I got the impression Kylo was lying in this scene. After all this build up, it seems odd that Rey's parents would end up being nobodies and have little to no effect on the rest of her story. If they are anonymous Jakku scavengers and the whole point is that anyone can be born Force sensitive (like the little boy at the end of the film appears to be), then lucky you — Rey and Kylo are not related! However, if you don't believe Kylo and instead subscribe to the popular fan theory that Rey carries Skywalker blood (i.e. she's either Han Solo and Leia's long-lost child, or Luke's illegitimate daughter), then yeah, there's a chance their special bond is much more cringeworthy than we all thought. Since there isn't any concrete information out there either way, we can't be completely sure.

Related:
In Case You're Wondering Whether the Big Death in Star Wars: The Last Jedi IS Actually a Death, Read This

What I will say is, I don't think Rey's parents are unknown "paupers," but I don't think she's a member of the Skywalker family, either. If I had to bet, she's a descendant of Obi-Wan Kenobi's bloodline. After all, Rey hears the voices of actors Alan Guinness and Ewan McGregor — who both played Obi-Wan Kenobi in the previous films — when she picks up Luke's lightsaber in the basement of Maz Kanata's castle in The Force Awakens. Could that be because Obi-Wan had the lightsaber in his possession for far longer than Luke did, and it's calling for its next rightful owner? There are also plenty more parallels between the two characters' lonely, desert backstories.

At the end of the day, the most likely conclusion is that the connection between Rey and Kylo is not because they're related by blood, but rather they're both enduring inner turmoil — Rey trying to find her rightful place in the world and Kylo grappling with both the murder of his father and his fractured relationship with Leia. Only together can they bring balance to the Force and give their universe a fresh start. But if the ending of The Last Jedi is any indication, they have a long road ahead of them.