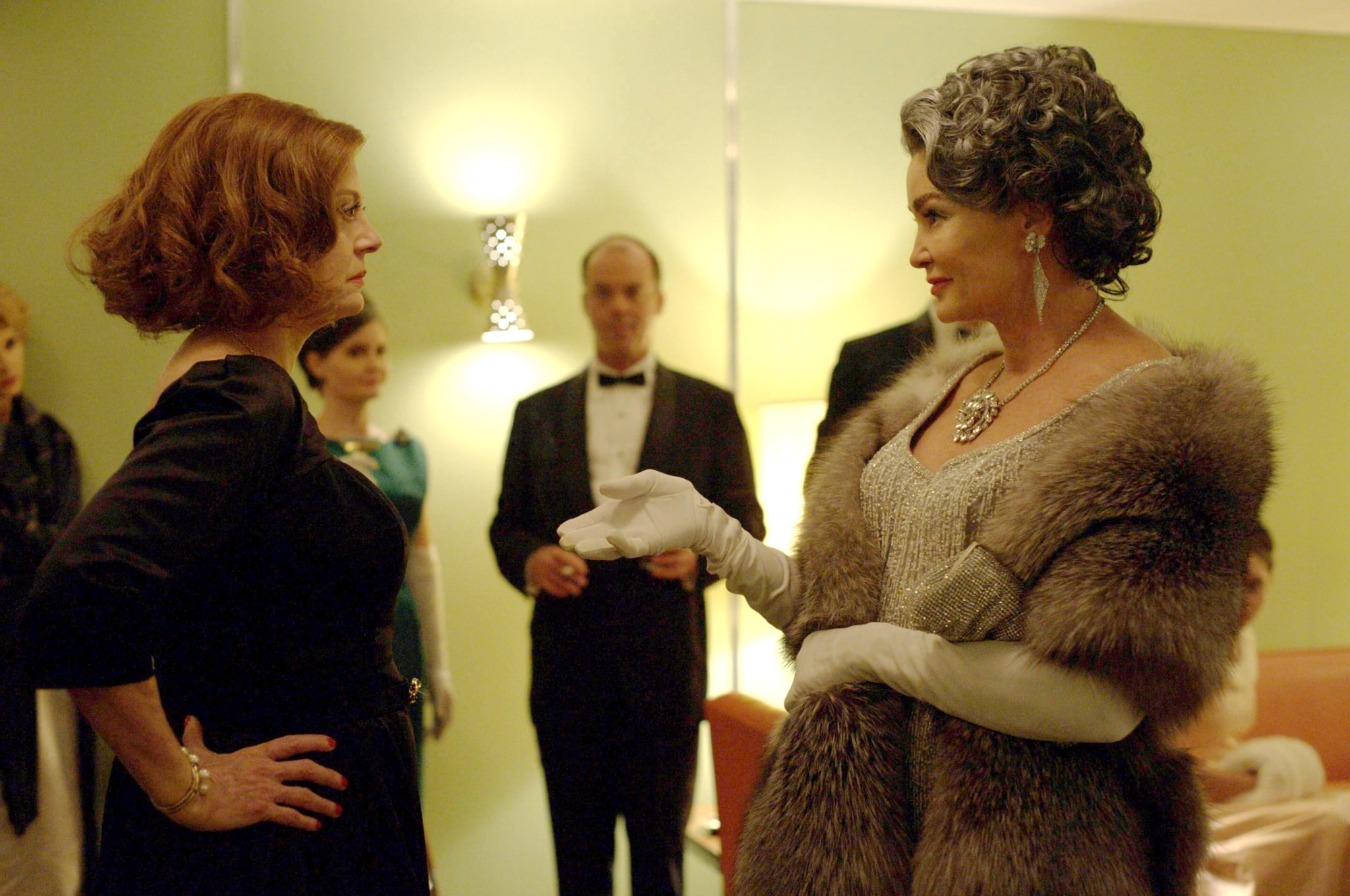 The sixth episode of Feud: Bette and Joan on FX, titled "Hagsploitation," explores the "psycho-biddy," a genre of horror film which depicts a once-glamorous woman becoming senile and frightening as she gets older. After the success of What Ever Happened to Baby Jane?, producers approach Bette Davis (Susan Sarandon) and Joan Crawford (Jessica Lange) to reunite for the film Hush . . . Hush, Sweet Charlotte about a reclusive old Southern belle (Davis) who everyone thinks murdered her married lover decades before. Once again, Davis and Crawford are pitted against each other, but this time, it proves to be too much drama for Crawford and she exits the project, with Olivia de Havilland (Catherine Zeta-Jones) taking over her role.

For decades, women of a certain age in Hollywood have graduated from ingenues to grannies seamlessly, with the scary "older" woman in horror films used as a common trope for actresses over the age of 50 (even Lange played a deranged mother-in-law in the 1998 film Hush with Gwyneth Paltrow when she was 49). Sometimes this slippery slope from babe-in-the-woods to Annie-Wilkes-in-the-cabin takes place in just a matter of movies. Amy Schumer's "Last F**kable Day" sketch reminded audiences that Sally Field was Tom Hanks's love interest in Punchline in 1988, and then played his mother in Forrest Gump in 1994 (their age difference is just nine years). Even though Field doesn't play a scary older woman, it's startling to recognize how fast she became a mother to her love interest (eek). 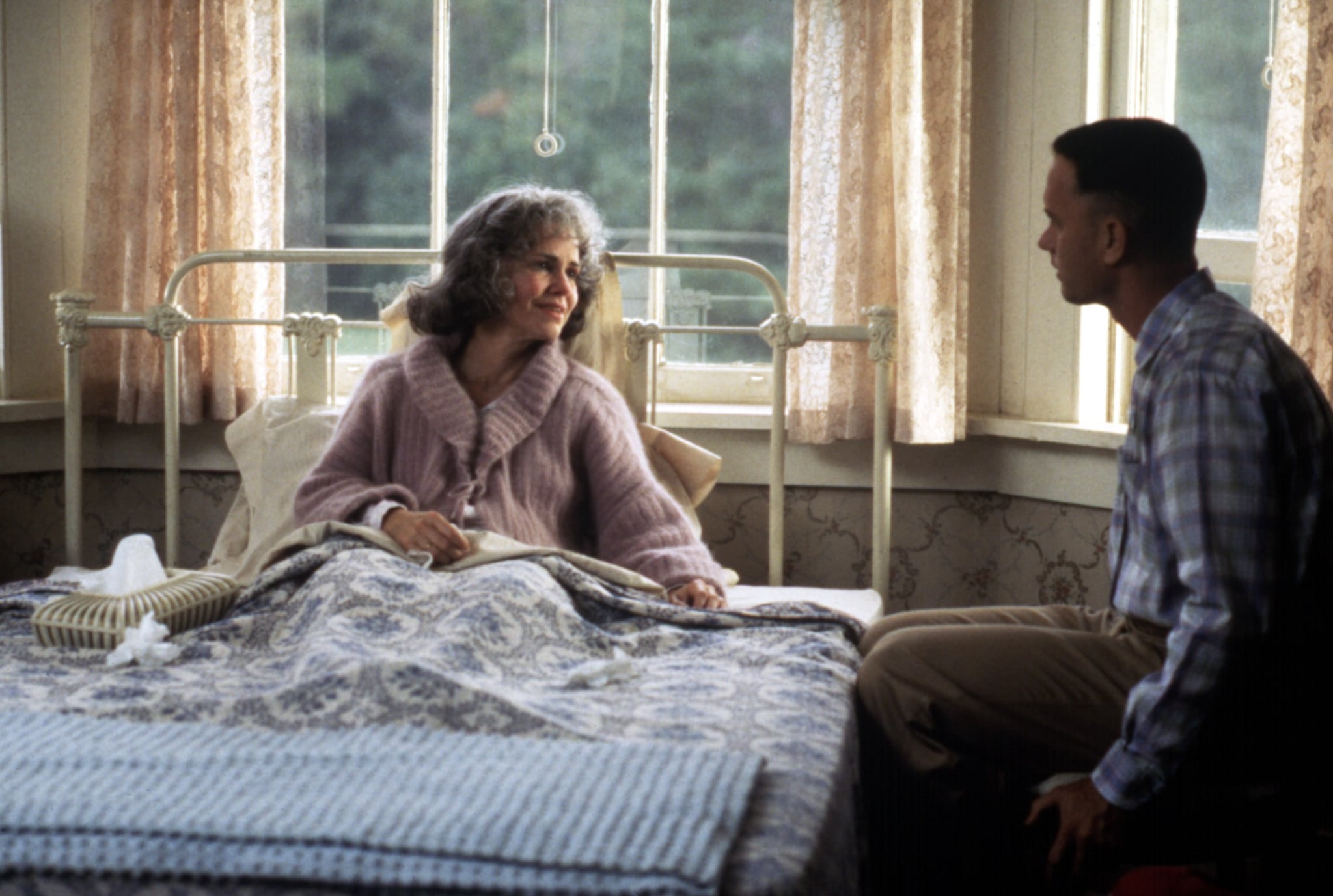 But in recent years, there's been a shift, with actresses over the age of 40 only getting better roles with age (just look at Julianne Moore and Julia Louis-Dreyfus) and playing more than crazy doting mothers. The Summer of 2017 at the movies saw further proof of this with Charlize Theron (41) playing a kickass action hero and the surprise hit comedy Girls Trip, which starred three female leads over the age of 40 (Queen Latifah, Jada Pinkett Smith, and Regina Hall), outdoing its younger comedic predecessor, Rough Night, at the box office. So not only are movies and TV series skewing toward representing older women, but audiences are responding to these projects in a positive way. 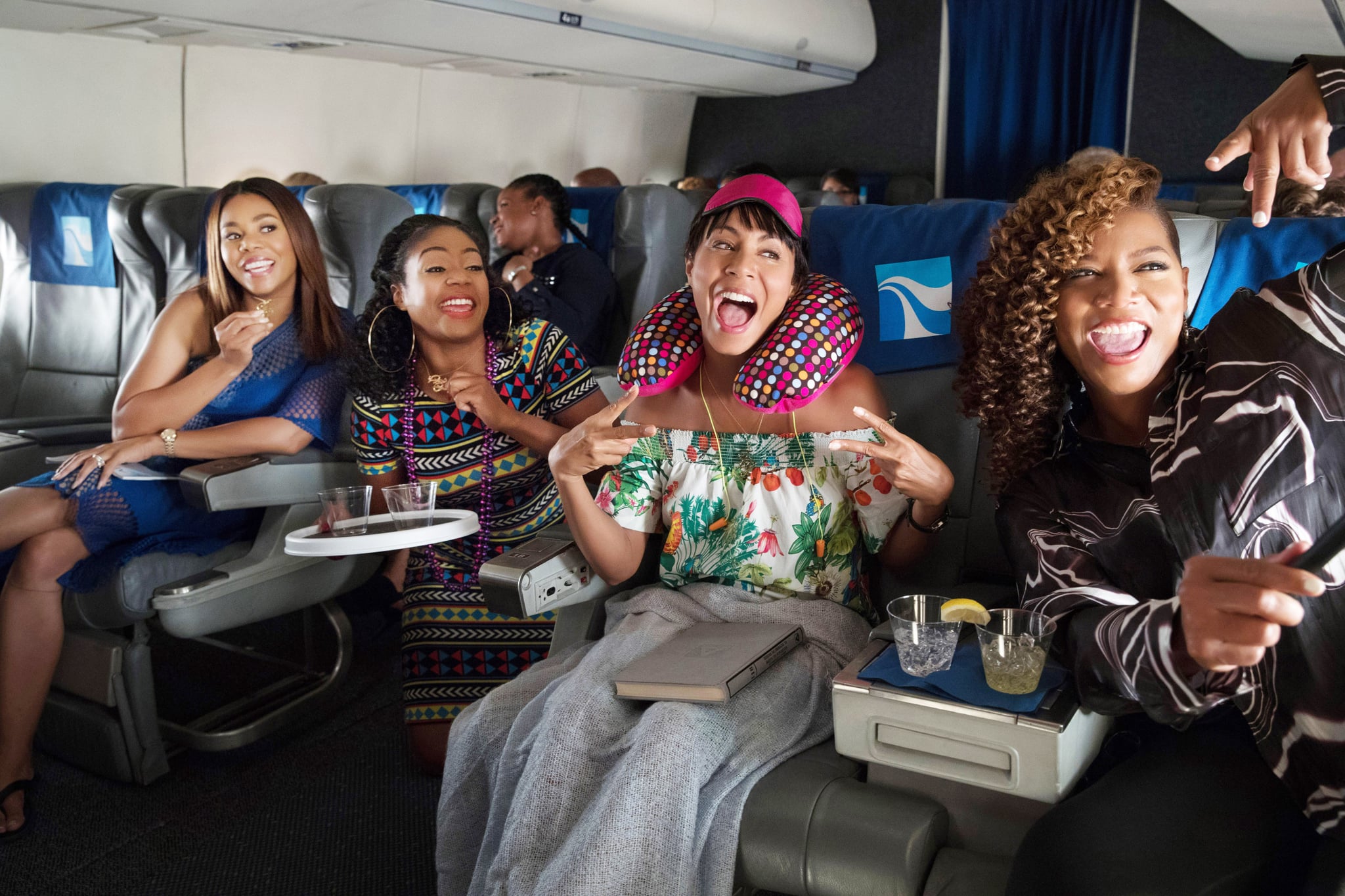 No TV series or movie exemplifies this evolution more than Feud's ultimate Emmy competitor, HBO's Big Little Lies, which is the perfect companion piece to the Jessica Lange/Susan Sarandon showdown, demonstrating how far actresses in Hollywood have come even if there's more work to be done. It also shows television's influence over movies in the "Peak TV" age.

The more interesting roles for women over the age of 40 are on television, and they're often rewarded for these roles. Over the past 10 years, the average age of the outstanding actress in a drama series has been 45.7 (winners have included Glenn Close, Julianna Margulies, and Kyra Sedgwick). As the first black actress to receive the outstanding lead actress in a drama series, Viola Davis famously said in her Emmy speech, "You cannot win an Emmy for roles that are simply not there," and on television, the roles are progressively becoming "there" for both women of a certain age as well as women of color. When it comes to the Academy Awards, though, the average age of winners for best actress in the past 10 years is 37.5, with recent winners including Emma Stone (28), Brie Larson (26), and Jennifer Lawrence (22), and a black woman hasn't won the Academy Award for best actress since Halle Berry in 2002, who was 36 when she won. Even the year that Bette Davis lost the Oscar, as depicted in the "And the Winner Is . . ." episode of Feud, she was beaten by Anne Bancroft, who was 31 and 24 years her junior at the time.

Granted, on paper, BLL is about a group of "crazy" doting mothers, but these are women who are having lots of sex, running businesses, and ultimately banding together despite their differences. This is quite the contrast from the women in What Ever Happened to Baby Jane?, who are depicted as reclusive spinsters with no company, set in a house all alone with minimal income and opportunities, and lastly, who are attempting to kill each other. 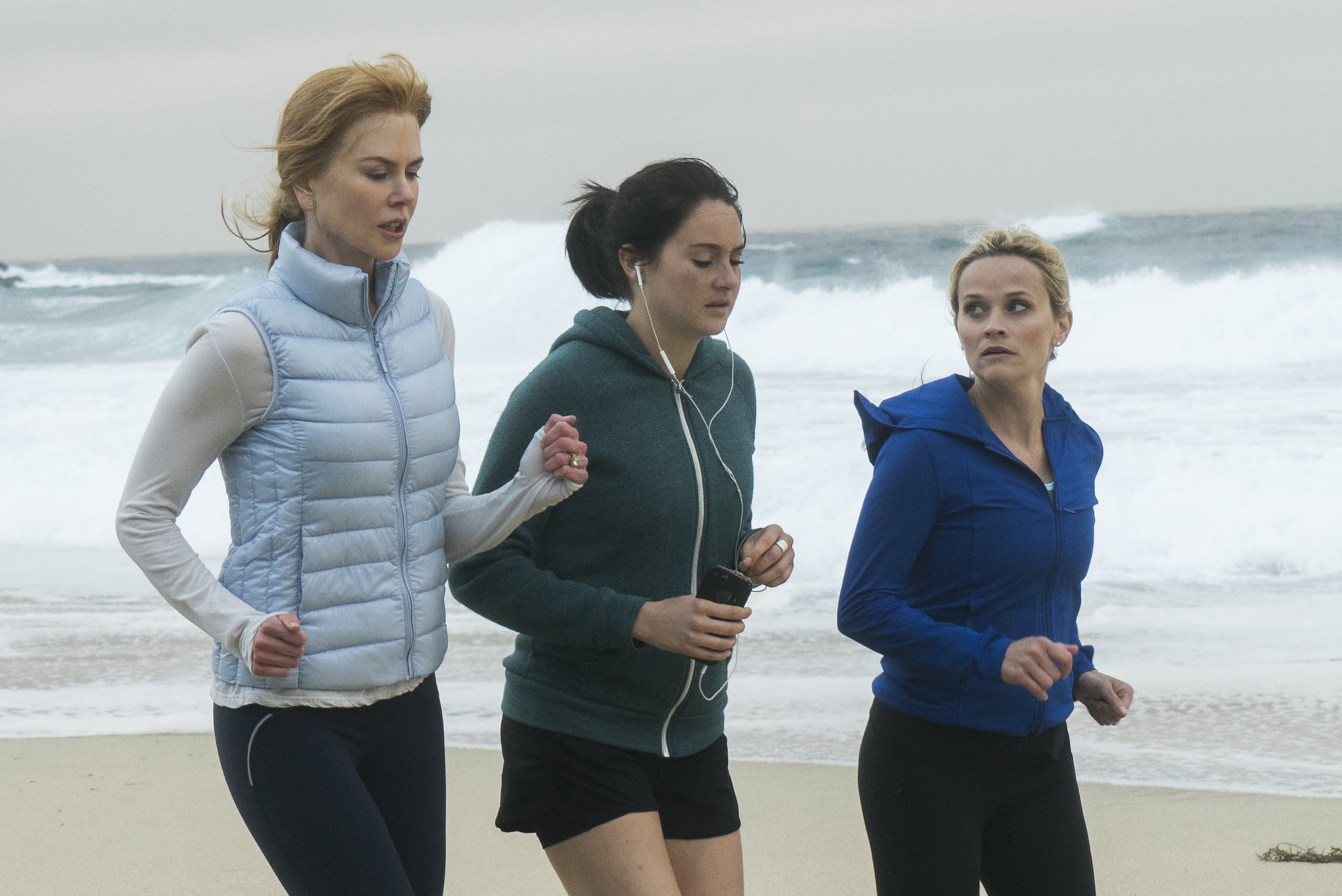 Before Big Little Lies came to a close, the internet was abuzz about the series in the days leading up to the finale, similarly to that of what was felt during the What Ever Happened to Baby Jane? premiere in 1963 (audiences reportedly screamed and disrupted the premiere every time Bette Davis batted a lash). Despite the unique storylines, BLL and WEHTBJ both have murder, a beach, and most importantly, aging actresses.

Nicole Kidman, Jessica Lange's main competition in the outstanding actress in a limited series or TV movie category, turned 50 this year. Meanwhile, Laura Dern — who delivers an excellent supporting performance as love-to-hate Renata (for which she was also nominated) — is 50 years old. These women are just four years younger than Bette Davis's age when she played Baby Jane (Joan Crawford was "allegedly" 58 when she starred in Baby Jane, since her real-life age has never been confirmed). Fifty some years ago, these actresses would be put out to Hollywood pasture, but now, they're enjoying some of their finest work and demand for more (fans want a season two of Big Little Lies so badly that there's a Change.org petition). A notable change from the BLL book to TV series is the reduced role of Jane, the 20-something mother played by Shailene Woodley, which is another demonstration of less of a reliance on youth for the juicier storylines.

The women on Big Little Lies are getting older, but they're still depicted as glamorous (the Monterey money sure does help, of course), turning the psycho-biddy genre on its head. They're also still depicted as sexual beings. Kidman's character Celeste is married to a much younger man (Alexander Skarsgard), with the age difference between the two being 10 years. This, too, is pretty notable as far as Hollywood onscreen romances go, where 37-year-old Maggie Gyllenhaal is being told she's too old to play the romantic love interest of a 55-year-old.

Big Little Lies and Feud prove to be great companion pieces when it comes to TV viewing and have been rewarded with eight and 10 Emmy nominations, respectively. Feud shows audiences what "used to be" while BLL demonstrates the progress that's brought us to where we are. While there's still a lot of work to do when it comes to ageism and sexism toward women in Hollywood (and society in general), compare the ending beach scenes of Big Little Lies vs. What Ever Happened to Baby Jane? BLL ends with these female enemies coming together despite their previous acrimony, while Baby Jane is less hopeful, with a delirious Jane twirling around while her sister is dying. Never has true sisterhood been captured more on screen than in that final Big Little Lies scene.