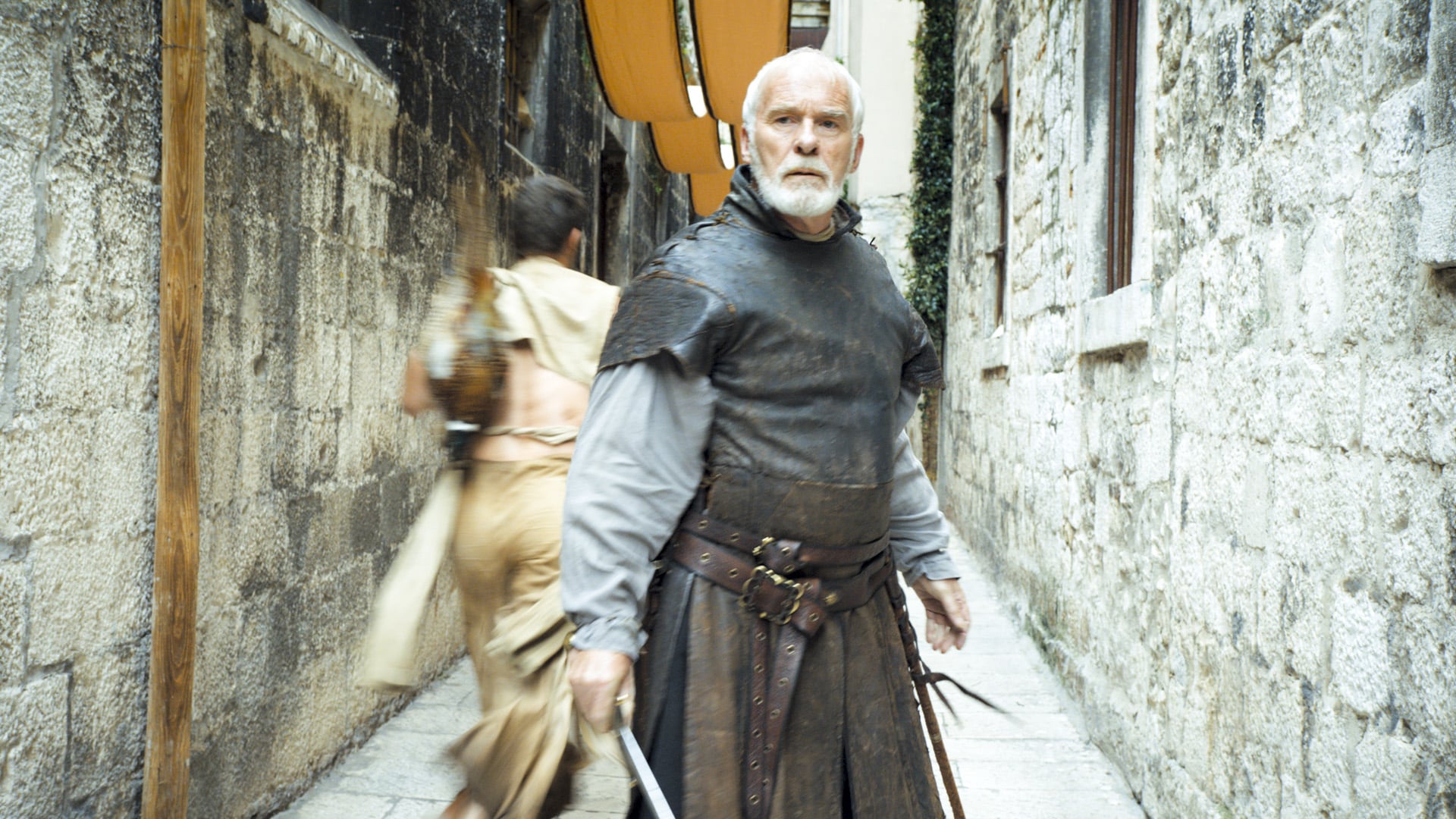 Everyone from Edmure Tully to Robin Arryn makes a surprise appearance in the Game of Thrones finale, but the most unexpected throwback of the evening goes to Ser Barristan Selmy. The former Commander of the Kingsguard and loyal follower of Daenerys Targaryen dies in season five, and the actor who played the character wasn't too pleased with his early exit.

Per The Telegraph, Ian McElhinney claims he wasn't told about his character's death ahead of time, which is a pretty big deal since in the books Selmy is still alive and well. That's why the moment his page in The Book of Brothers is shown as Brienne flips to Jaime's entry feels so special. The old knight never fully got his due on screen, but at least the writers found a way to acknowledge his influence on the story as a whole.

Selmy is first introduced in season one as a seasoned knight who served the Lannister army. Despite his unwavering loyalty to the Mad King and Rhaegar Targaryen, Robert Baratheon holds the knight in the highest of esteem. King Robert would have been well within his rights to execute the Targaryen loyalist after the Battle of the Trident, but instead he makes Selmy the Lord Commander of his Kingsguard. Selmy serves him faithfully right up until he dies, and he's ready to serve Joffrey, too. But in true Joffrey fashion, he chooses to be cruel to the honorable knight and dismisses him from service — an insult of the highest order since the Kingsguard serves for life.

Ser Selmy leaves King's Landing and heads across the Narrow Sea to reaffirm his dedication to House Targaryen. He joins Daenerys's cause, and proves to be a valuable adviser. Unlike the other people around her, Selmy has seen the best and the worst of the Targaryens first hand. He knows how cruel the Mad King was, but he's also able to tell the mother of Dragons about her brother Rhaegar's kindness. As she conquers the slave cities, he's always there to gently try to guide Daenerys toward choosing mercy whenever she can. Sadly, he dies in Meereen after witnessing the Sons of the Harpy killing members of the Unsullied and injuring Grey Worm. He goes down fighting and protecting his queen's men, but had the series adhered closer to the books, he would have had far more to do than die saving Grey Worm.

That's why McElhinney was none too pleased to see his character die so soon. He told The Telegraph in October of 2015, "I knew before I even saw the script because I got the schedule. Unfortunately I'd read the books, so I had expectations for season five. As soon as I got the schedule I thought, 'There's something not here', because I thought I'd be doing more scenes. In fact, I was doing less. So immediately I thought, 'They must be writing me out'." He went on to explain that he thought he would have at least through season six to explore his character. In the books, he's currently trying to keep Meereen from devolving into chaos during Daenerys's absence, a role that Tyrion took over on the show.

Despite the actor's disagreement with the writers, it felt fitting to see Selmy's name in The Book of Brothers. He may not have had quite as big a role in the TV series as he should have, but there's no denying that Selmy will always be one of the truest and most dutiful knights in the realm.