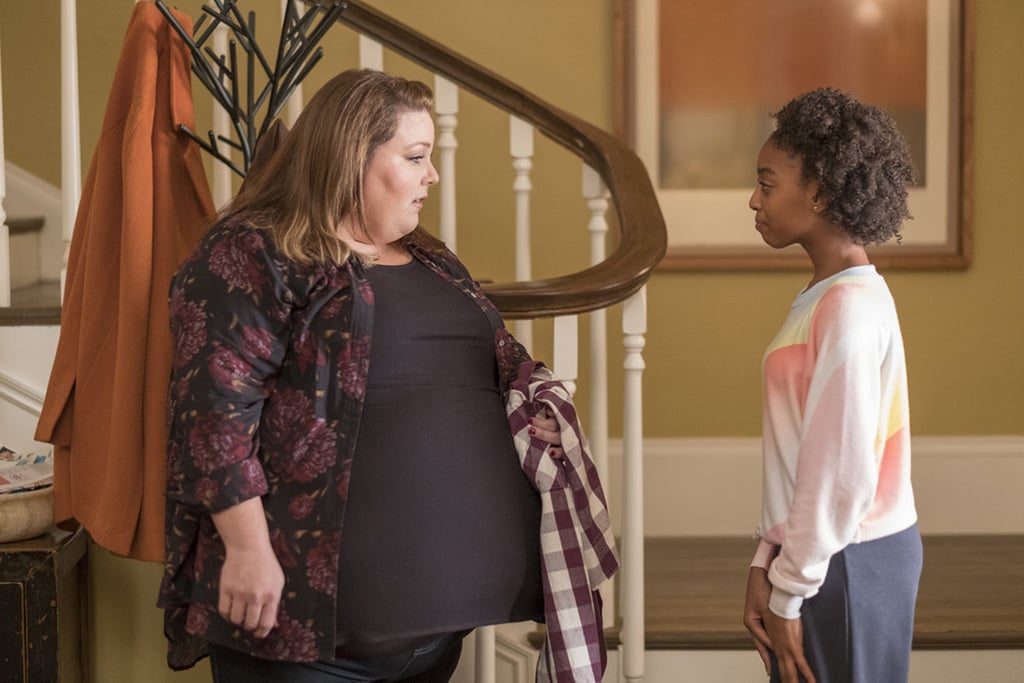 Warning: if you're not a fan of spoilers, do not read on until you've seen Nov. 20's episode of This Is Us.

This Is Us may be a fictional TV show, but there's no shortage of valuable real-life application that can come from each episode. During the NBC series's three seasons, viewers have watched each character handle personal growth, and during Nov. 20's Thanksgiving episode, fans got a subtle glimpse of some future development for Tess Pearson.

During the episode, Randall, Beth, and Annie go to hand out food at a shelter before Thanksgiving dinner, while Tess stays home with Kate and Toby. Tess gets her period for the first time, and after an embarrassing run-in with Toby, she has a heartwarming conversation with her aunt. Kate shares her own mortifying first period experience to ease Tess's worries and reminds her that she's growing up. "Pretty soon you're going to have your first boyfriend," Kate says, to which Tess tentatively responds, "Or girlfriend?" Kate's supportive reaction is a visible relief to Tess, and she asks her aunt to keep this revelation private until she's ready to tell her parents.

This serves not only as a twist to fans but as a gentle reminder that Tess's romantic interests aren't limited. As Tess is still pretty young, the show's executive producer Isaac Aptaker told Entertainment Weekly this storyline exploring her sexuality is "a slow burn" that "will play out for Tess over the life of the show." This moment shared between Kate and Tess may only hint at what's to come, but the message of inclusion and acceptance isn't lost on viewers. Below, see how fans reacted to Tess's vulnerability and character development. Hint: there's a lot of support and excitement ahead.

Related:
This Is Us: Randall's College Essay Has the Internet Wishing He Was Available For Tutoring
Previous Next Start Slideshow
This Is UsTVTwitter Reactions