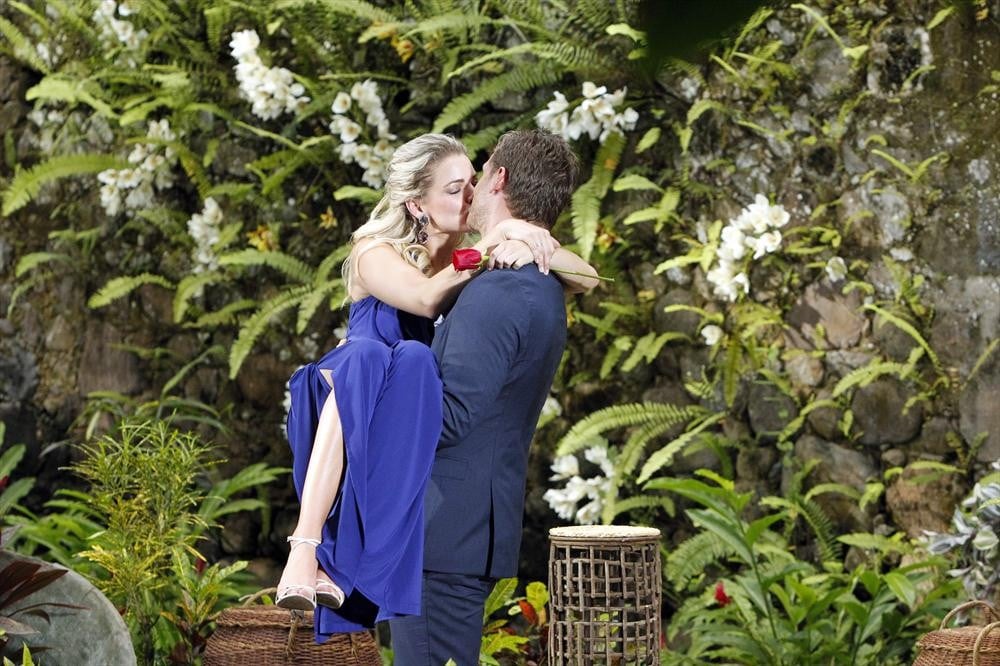 It's no secret that The Bachelor's Juan Pablo stirred up controversy this past season, and during Monday night's finale, past cast members weighed in on the buzzed-about final rose. In the season finale, viewers watched as Juan Pablo picked Nikki Ferrell after sending a frustrated Clare Crawley home. When Clare walked away in St. Lucia, she said, "What you just made me go through, I would never want my kids to have a father like you," and the live studio audience actually cheered as she left. When Juan Pablo responded with "I'm glad I didn't pick her," there were gasps.

Later, as Chris Harrison spoke with Juan Pablo and Nikki, things got tense when the host repeatedly asked Juan Pablo if he was in love and Juan Pablo didn't say one way or the other. "It wasn't about getting Juan Pablo to say he loved Nikki. It was about getting him to really say anything of substance about a woman who had professed her love for him and had hoped for a proposal from him," Chris wrote on his Entertainment Weekly blog. Juan Pablo also snapped at Chris for interrupting him, and if the live tweets are any indication, a lot of people weren't too happy about how the Bachelor handled those final moments.

Over the past couple of months, fans fell in and out of love with Juan Pablo, and it seems like Bachelor nation has mixed feelings about him too. Sean Lowe expressed his disbelief both on Twitter and on The Bachelor: After the Final Rose special, while his wife, Catherine, chimed in about the in-studio awkwardness. Meanwhile, past Bachelorettes like Ali Fedotowsky, Emily Maynard, and Jillian Harris also tweeted their two cents. As Juan Pablo and Nikki move their onscreen romance into real life, take a look at how the show's community reacted to the finale of The Bachelor.

Being in the public eye does NOT give you the right to say what you want to me. Your words hurt no matter what. Be ashamed of yourselves.

Kelly Travis, another contestant who vied for Juan Pablo's affection, showed her support for Nikki.

I remain #teamnikki. She is incredibly smart, funny, gorgeous, and an amazing friend. I trust her judgement to the fullest. @Nikki_Ferrell

More support came from Molly Mesnick, who married Jason Mesnick of The Bachelor after he sent her home.

@Nikki_Ferrell Keep your head up lady. @jason_mesnick & I went through ALL of this too. It will pass...just stay strong & focus on the good.

Past Bachelor Sean Lowe was not too impressed with how things turned out.

This is painful to watch. #TheBachelor

JP lives with his foot in his mouth. #TheBachelor

There's only one rule on The Bachelor... Don't offend @chrisbharrison

My take on last night: I commend JP on not proposing if he isn't ready. And he certainly shouldn't feel pressured to say "I love you".

Sean's wife, Catherine Lowe, wasn't very into this season, either.

The fact JP didn't propose is so far down on the list of why this season ended so horribly. #TheBachelor

Arie Luyendyk Jr., a contestant from Emily Maynard's season of The Bachelorette, linked up with Clare while in the studio.

So impressed by @Clare_Crawley and how she stood up for herself tonight! pic.twitter.com/xWDYvVFFFQ

Juan Pablo is even harder to understand in person #wrapyourheadaroundthat

Trista Sutter, the first leading lady on The Bachelorette, got candid about Juan Pablo.

And let me be clear...I am by no means confused that JP isn't in love. I am confused as 2 why being disrespectful & rude are called honest.

I'm confused by the lack of answers & the rationale behind dodging ?s. 1 thing I'm not confused by...@chrisbharrison & how I like him a LOT!

Ali Fedotowsky, another star of The Bachelorette, didn't like how he handled things either.

I want to send lots of love to @Nikki_Ferrell ❤️ Follow your heart girlie. Trust yourself and don't listen to what anyone else thinks.

Ditto for The Bachelorette's Jillian Harris.

Ugh. I don't even know what to think about that #bachelor finale. My heart hurts a little for everyone on that season right now.

The BachelorTV
Around The Web

Music
American Idol: Lionel Richie Said This Singer's Voice Only Comes "Once in a Generation"
by Chanel Vargas 7 hours ago