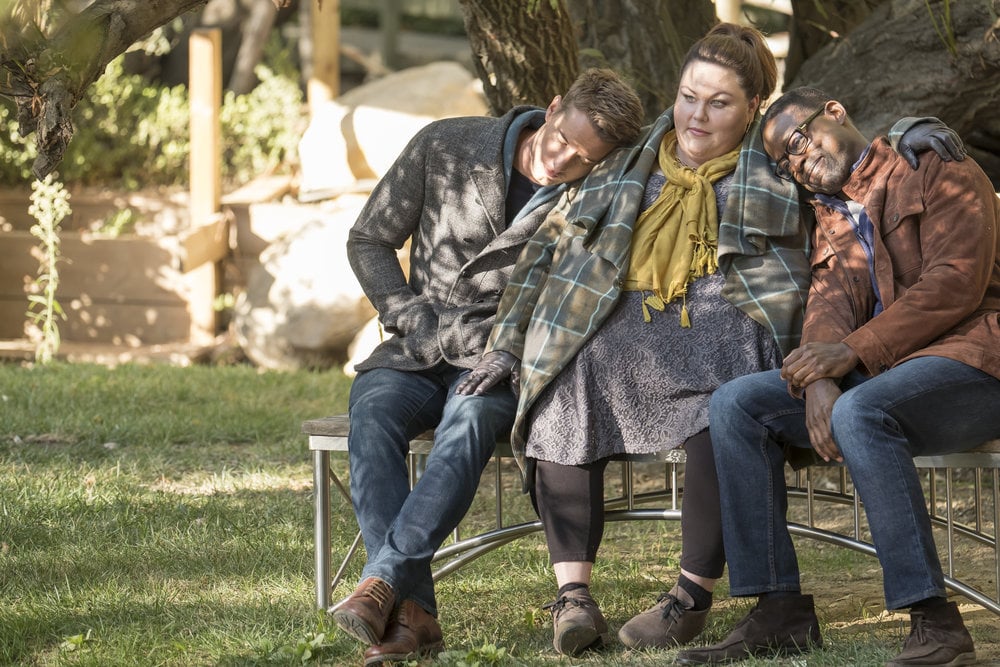 This Is Us certainly knows how to save the best for last. During the final few moments of the season two finale, the show unveiled another flash-forward — three, to be exact. While the past two seasons have kicked off with the Big Three turning another year older, it seems season three will follow suit by picking up during the Fall of Kevin, Kate, and Randall's 38th year. Bear with us as we break it all down below.

First up, we get a glimpse of Kate and Toby's life as a married couple. Spoiler: it doesn't look good. While the two are all smiles during their wedding, the short flash-forward shows Kate attending to bedridden Toby, who has fallen into a deep depression. "I think we've seen Kate and Toby weather a lot," coshowrunner Elizabeth Berger told The Hollywood Reporter after the finale. "Toby has often had to be the strong and supportive one. This is a situation where Kate may have to take the lead on that front. I think she is now really emotionally prepared to be that person for him. We'll see some of that moving forward."

On the flip side, Kevin is enjoying a new romance with — get this — Beth's cousin Zoe (played by British actress Melanie Liburd). As the two take a flight to Vietnam, Kevin is shown glancing at his father's picture from the war before giving his girlfriend a sweet kiss on the head. Aww! And we will be getting even more glimpses of their relationship next season. "When we come back, we're going to be embarking on a new chapter with them sort of discovering their romance, and their relationship, and figuring out what they are," Berger said. "We can expect to see her for a while."

And then there's Randall. Instead of flashing forward to his 38th year, the episode goes back to the flash-forward of him and grown-up Tess. As they get ready to head to lunch, Randall asks his daughter if she's ready to visit "her," to which she replies no. So, who exactly is the "her" the father-daughter duo are referring to? That will be a main question for next season. "I can't tell you who the 'her' is, but we'll be definitely following up on it in season three," Berger teased.

Sounds like we're in for quite the ride when This Is Us returns for season three!